I’ve been out of the toy collecting game for several years now.  I used to enjoy it as a hobby and it was a nice way to link my childhood to my adult life as I pursued action figures of characters I loved as a kid.  It became a compulsion eventually.  I started off just buying the characters I was particularly fond of like Venom and Iceman, but once it became a full-fledged hobby I was suddenly finding myself scouring department store toy aisles six at a time looking for an obscure Man-Thing or Warbird.  That’s when it became about the hunt.  Tracking down the exclusive Wal-Mart wave of Marvel Legends was especially thrilling.  It seems silly in hindsight, but it was kind of addicting.  Eventually though the quality of the figures declined and I also ran out of room for all of these toys.

I got a little taste of that rush today when I tracked down a set of Teenage Mutant Ninja Turtles Classics.  It was a pretty easy hunt as I found a full set at the first place I went to, but I can’t deny it was a lot of fun.  The wondering, the hoping they’d be there.  I credit my interest in the line to my love for the TMNT as a kid and the new collections put out by IDW Publishing of the old books.  I’m currently onto volume 3, expect a review once I finish it. 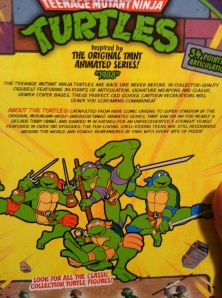 The reverse side of the packaging.

I’ve talked about it many times, so I won’t go into too much detail here, but I did love the TMNT as a kid and they still hold a soft spot in my heart.  One of my last toy-related purchases before today was for a set of the turtles puts out by NECA.  I dubbed them my all time favorite as they’re a wonderful representation of the turtles as they appeared in the pages of Mirage Studios brand comic books back in the 80’s.  These collections, plus a new line of comics launched by TMNT co-creator Kevin Eastman, have helped to contribute to a renaissance for the turtles that will soon culminate in a new television show aimed at kids on the Nickelodeon network.  To capitalize on this, and the original cartoon’s coming 25th anniversary, Playmates has launched a new line of toys aimed at those who fell in love with the turtles through the toys and cartoon back in 1988.

This new line, appropriately titled TMNT Classics, was first shown last February at the New York Toy Fair and has recently hit shelves in speciality shops and big box stores like Toys R’ Us.  The packaging on these new turtles states that they’re based on the look of the turtles from the old cartoon, but it would be more appropriate to say they’re combination of that look along with the style of the old toys.  Back in the 80’s, kid’s shows were basically extended commercials for toy lines and the turtles were no exception.  The toys were developed alongside the show and since Playmates only had concept art to go off of they ended up having their own look.  Each turtles had his own unique skin-tone and all sported solid, white eyes.  It was basically a hybrid of the comic look and the one the cartoon would go with.  These new toys sport the rounded features of the cartoon along with pupils in their eyes but retain their unique skin-tones, though they’ve been changed some.  Raphael has a darker green complexion while Don isn’t as brown as he used to be.  Donatello and Leonardo also retain their shoulder straps and each turtle, excepting Donatello, has wraps around the handles of their respective weapons featuring their trademark color (Raph’s sais are red, Leo’s katana handles are blue, etc).  It’s an interesting approach though I do kind of find myself wishing that Playmates just went all out in trying to make these turtles television accurate.  We already have comic accurate turtles, and the 2003 toy line paid homage to the original toy line, but we’ve never had cartoon accurate turtles.  Yes there was a wave of Toon Turtles in the 90’s but they were pretty crappy looking. 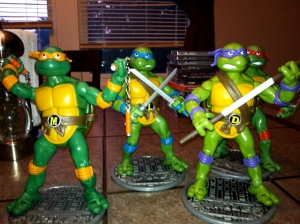 Group shot! Notice how some of the pupils are oddly placed.

Even though they’re not entirely cartoon accurate, these turtles are pretty nice to look at.  They’re loaded with articulation but their features are more reminiscent of the TMNT movie line of figures than the NECA one.  NECA went through the trouble of trying to hide the articulation but Playmates didn’t see need to, so while a lot of poses are possible, the numerous holes and joints do detract from the look of the figures.  And if the joints aren’t tight, it really hinders the amount of poses one can achieve.  My Raph has pretty loose leg joints which makes standing him a chore.  The hands on all of them are particularly combative as each features articulated fingers and thumb.  The finger piece on the left hand of my Leo figure even fell off in the packaging.  They can never get a good, solid grip on their weapons and the hands on all four definitely feel fragile.  There’s also an abdominal joint in each turtle that’s kind of odd.  The show’s animators definitely did take liberties in how the turtles could bend and move in those shells but I’m not sure the abdominal joint adds much.  Playmates at least had the foresight to only insert the joint in the front and not the rear of the shell, which would have looked horrible.

Scultp wise, all four turtles are the same with the exception of a unique head sculpt.  The head sculpts are a call back to the original toy line as each turtle features the same or similar expression he had back in 1988.  This means they all look angry and I kind of wish they had gone with less intense expressions.  Leonardo should probably be grim and serious, but Raph and Mike definitely shouldn’t be.  The figures are tall, around six inches, so they don’t fit in with any other TMNT toy line.  They’re not too stocky looking either, and their proportions do remind me a bit of the movie line for the TMNT film.  They have kind of odd looking forearms and really long arms in relation to their legs.  Overall though, the sculpt is pretty solid for each turtle and they look good side by side though I really do wish Mike had a better face sculpt.

As far as accessories go, these are pretty bare-boned.  While the original toy line came with a bunch of ninja stars and other oddities, these turtles only come with their trademark weapons and Don only comes with one bo staff.  Each turtle also comes with a personalized manhole cover stand and their belts can hold their weapons easily.  Some toon specific items would have been fun like a mouser or turtle-com, but oh well.  The quality of the weapons is pretty standard, though Playmates did go above and beyond with Mike and gave him actual chains on his nunchaku which is a nice addition.  I never want to see another Mike action figure that doesn’t feature this.

The paint job for each turtle is solid, though not very demanding.  Playmates opted for colored plastic for most of the parts with the paint only really coming into play with the bandanas, eyes, and teeth.  In the case of the eyes, it leaves something to be desired.  The rounded shape of each turtle’s head makes it difficult to paint on pupils that appear to be focusing on the same spot.  As a result, both my Don and Mike almost look like they have a lazy eye.  This has convinced some collectors to just paint over the pupils on their figures and go with the classic all white look.  From what I’ve seen, this actually looks pretty good but does take away from the cartoon look.  I’m not one to modify my toys anyways.

So did Playmates deliver with their classic TMNT line?  Mostly.  These are the most cartoon accurate turtles to date and they feature a lot of articulation which will allow fans to pose them in almost any position they can dream up, provided the joints are tight enough.  Even though they are the most cartoon accurate figures of the turtles to date, they’re still not the definitive take on the source material and the copious amounts of articulation does take away from the look a bit.  They’re also light on accessories which is hard to take considering these are the most expensive turtle figures I’ve ever bought.  I paid 20 bucks a turtle at a specialty shop, though the MSRP is said to be $18.  That’s still a lot of money for an action figure that’s pretty basic but hardcore fans will probably pay it.  I’ll have a hard time finding display space for these guys, but the nostalgic factor alone makes me mostly happy with my purchase.  They don’t top what NECA did with the turtles a few years ago, but they’re pretty damn good in their own right.  If you’re the sort of fan that’s really in love with the TMNT, then these figures are for you. 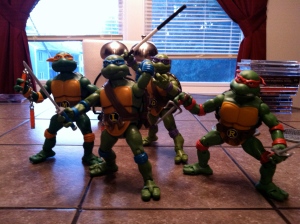 This entry was posted on Sunday, August 12th, 2012 at 8:16 pm and tagged with donatello, kevin eastman, leonardo, michaelangelo, neca, peter laird, playmates, raphael, splinter, TMNT, turtles and posted in Comics, Television. You can follow any responses to this entry through the RSS 2.0 feed.
« The Dark Knight Rises
Greatest Games: Chrono Cross »