It took awhile, but I finally have my hands on the second turtle from NECA’s 1/4 scale series of Teenage Mutant Ninja Turtles based on the original film. Raphael was released back in February, but I left the preordering of this series to my wife who saw them as gifts for basically the coming year for me. My wife, bless her, is not someone who normally orders such things and she ordered from a site I had never heard of that ended up not getting Raph in when they were supposed to, so what was originally planned as a Valentine’s Day present turned into a June birthday gift. Fear not though, I have since clued her in to better vendors so my actual birthday present (Leonardo) should be arriving soon, as I know you are all waiting with bated breath for my reviews.

If you read my review for Donatello way back in January, then you should already be pretty familiar with Raph. Structurally, he’s essentially the same figure as Don as both make use of the same parts. This is both good and bad as it means the things that are great about Don are shared by Raph, and the not so great things are as well. That’s sort of the “curse” of being a TMNT collector as you basically buy the same figure four times, but it’s hard to argue against the practicality of the release. 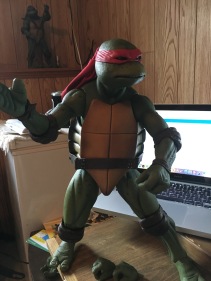 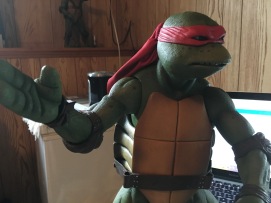 Let’s get the bad stuff out of the way before getting to the good. This is a big figure, being 1/4 scale, so he’s also pretty heavy. Being heavy means he needs tough joints or else his arms and legs would be too flimsy for posing. This also means some of the joints are really hard to work, and the cumbersome nature of a turtle shell doesn’t make things any easier. My Raph has a particularly troublesome left shoulder that’s hard to get the socket to work right so that he can lift his arm. There’s definitely some “breaking-in” required for these figures, but since they’ll end up running you over $100, there’s a reluctance to work the joints too hard out of fear of breaking them. While Raph possesses an abundance of articulation, it’s not the most functional articulation out there and the pictures you see in this post are essentially the only poses I was comfortable creating. 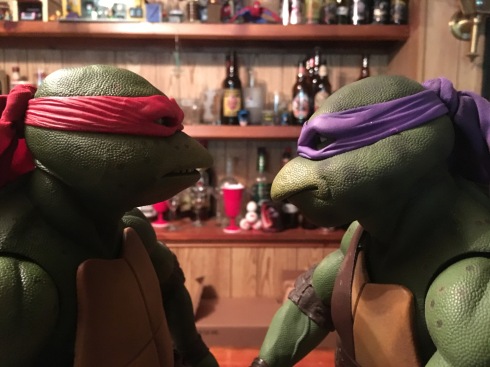 These figures are also somewhat minimalist when it comes to included accessories. Raph, by virtue of having two weapons, actually has one more accessory than his brother Don. Don came with five extra hands, a canister of ooze, and a slice of pizza in addition to his bo staff. Raph comes with six extra hands and a slice of pizza to go with his twin sai. Strangely, one set of extra hands is identical to his stock hands so I guess you can break and/or lose a set before you’ll be missing anything. Raph has one unique hand gesture compared with Don, a finger-pointing left hand that can be used to hold his sai in a unique way or use as a gesture. He famously gestures to his holstered sai when confronting a pair of muggers in the film, though sadly his range of motion can’t quite recreate that one. This is consistent with Don who has a thumb’s up hand gesture that Raph does not. The slice of pizza included with Raph is the same as the one Don came with, right down to the placement of the black olives. Laying them side by side, it looks like we’ll need four additional pieces to make a complete pizza so I wonder if Mikey will come with some extra slices when he’s released this fall. The missing accessory here is obviously Raph’s trench coat, hat, and backpack he sports in the film when he heads out to a movie. I can understand why NECA didn’t include such as it would probably be a substantial cost addition, but that doesn’t mean I don’t miss it. 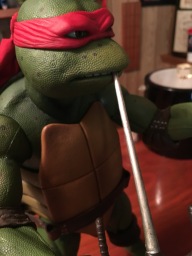 Raph primarily differentiates himself from Don with his head sculpt. One my favorite aspects of the original film is how the costume designers, the without peer Jim Henson’s Creature Shop, made sure each turtle looked unique. It was really the first time you could tell the turtles apart without their weapons or colored masks, even though they never remove their masks in the film. NECA did a great job with Don, and maybe a better job with Raph. His facial expression perfectly captures his beady eyes and that tough, but sympathetic, aspect of his character. A more serious expression works better for Raph than it did the more jokey Donatello, so it was probably easy for NECA to settle on a facial expression than it was Don. The “tails” on Raph’s mask are also of the same cloth-like material used for Don’s. The color matching between the tails and sculpted plastic of the mask is well done and it’s a nice, authentic, shade of red. The material adds a little personality to the ends of the mask that sculpted plastic can’t replicate. As I mentioned before, aside from the head sculpt the body is basically the same as Don’s. The freckles are different, and I don’t know if they’re just randomized for each turtle or if they match to the actual costumes in the film. Raph’s shell also sports significantly more ware and tear than Don’s, implying he’s probably been in more fights than his brother which certainly fits with his character. The musculature of his limbs is the same though, with an added vein here and there. His belt rides lower, as it did in the film, and the sai fit off to the side just fine, though I find angling them in the same manner as they are on the back of his box a little tricky. And that box, which resembles the original movie poster and VHS release of the film, is a nice way to display the figure for those who do not like to open their toys. I also love how the NECA logo on the rear of the box resembles the old f.h.e. logo of the home video release of the old cartoon.

NECA’s Raphael is every bit as good as Donatello which came first and which figure is better is probably determined by personal preference for the characters. Raphael was basically the star of the first film, and it’s great to see him brought to life like this. The 1/4 scale may not be for everyone (he stands over 16″ tall), but it’s hard to deny the level of detail the format allows. Licensing agreements with Nickelodeon and Playmates, who has held the main TMNT toy license since the cartoon was launched, prevent NECA from doing what they want with the license, but it’s clear the company has a love for the franchise. The price, which basically starts at $99.99 but is sometimes priced higher by other merchants, is also steep, but at least the release of each turtle has been spread out to help minimize the impact of such an expensive purchase. The figures are impractical, but if you loved the original film as much as I did, then you can probably talk yourself into collecting this line.

This entry was posted on Friday, June 23rd, 2017 at 12:41 pm and tagged with action figures, jim henson, kevin eastman, neca, peter laird, raphael, teenage mutant ninja turtles, TMNT and posted in Comics, Film, toys. You can follow any responses to this entry through the RSS 2.0 feed.
« Right Place, Wrong Time – Games Worthy of a Remake
Ranking the Games of the SNES Classic »