I was so happy with my Super Saiyan Vegeta from SH Figuarts that the very next day I purchased a second figure:  Kid Goku. Now I’ve mentioned more than once here that I prefer Dragon Ball to Dragon Ball Z. It’s just a tighter and more fun series with better action sequences. The characters become so overpowered in Dragon Ball Z that the fight scenes became a series of dashing lines as characters move faster than sight and lots and lots of posturing. Dragon Ball has some of that too, but not nearly as much. And shining like a beacon through out it is young Goku. His ignorance of virtually all of society is what drives much of the show’s humor (as well as the perversions of one Master Roshi) and it’s a personality trait that suits the youthful version of our hero better than the adult version. This isn’t to say the adult Goku of DBZ isn’t charming, he’s just less believable. 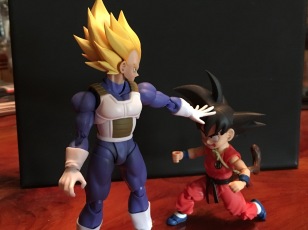 I initially bought Vegeta instead of Goku for the simple fact that he was five dollars cheaper. I assume he runs a little less because Goku comes with more accessories. His little box is packed to the gills with extra hands, face plates, and power poles and even boasts a Flying Nimbus with an extravagant action stand. A stand is what’s really missing from the Vegeta figure and seems like something that should be included for all of the flying characters so I’m happy to see it here. So while Goku is certainly smaller than Vegeta, I’d wager this set has more plastic in it (and that Nimbus is quite dense) than most of the SHF figures.

For this figure, Kid Goku comes depicted in his orange gi that he first started wearing following his training with Master Roshi. Prior to that he sported a blue attire, and while I would have probably preferred that to the orange one, it’s not really a big deal to me. Goku is about 4″ tall from head to toe and nearly 5″ when you factor in his hair. Height-wise, he seems to be pretty much in scale with Vegeta, though the proportions aren’t quite perfect with Goku being a little chunky. Like most of the kids in Dragon Ball, he has an oversized head which also looks a little funny next to Vegeta, though in all honesty Vegeta’s head could probably have been a little bigger upon reflection. Either way, Goku feels like he’s at about the right size and I’m more curious to see how he compares with the upcoming Master Roshi when that drops. 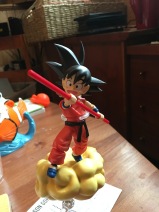 Young Goku has tremendous articulation, which is to be expected of any toy in this line. The giant melon atop his shoulders doesn’t appear to hinder his ability to stand much too, which is nice. If anything, the smallness of his feet can make it a bit of a challenge to get him to stand in more dynamic poses, but you always have the stand if need be. His articulation is good enough to that he can handle a Kamehameha pose or event sit slightly cross-legged upon the Nimbus. I’ve had a lot of fun moving him around and seeing what I could get out of the stand. The stand has to be partially assembled and it has movable grabbing parts so it’s really easy to fit it onto Goku. I was initially skeptical that it would do the trick, but it’s plenty sturdy and even the additional legs for the Nimbus have no trouble supporting both the weight of the Nimbus and Goku. The stand also isn’t necessarily needed to position Goku on his trusty flying cloud, but it helps and provides peace of mind for standing poses while a seated Goku probably doesn’t need it. 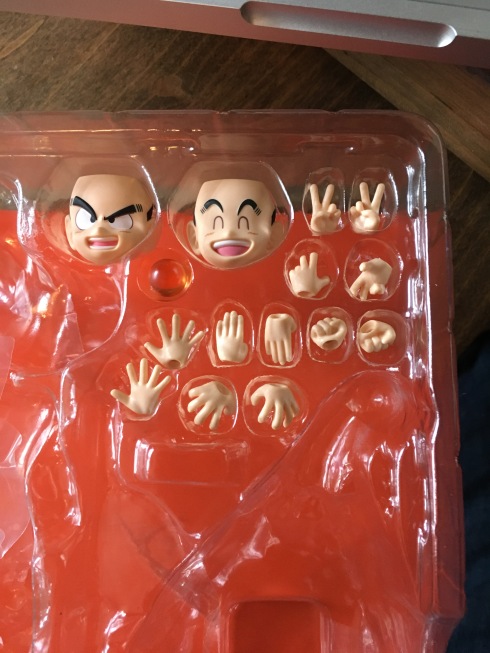 Look at all this stuff!

Goku has a vast assortment of hands and extra little bits, enough so that it was easier to just take a picture. In addition to his smiling, but determined expression he also has a happy open mouthed face and a giddy, squinty-eyed face. All are very appropriate for Goku and they are all easy to swap in and out. Goku’s bangs pop off and from there the face plate can be removed which does a great job of hiding the seams and keeping things nice and neat. His head pops off as well to allow his power pole sling to be worn (otherwise you won’t get it over his dome) which features the handle of the infamous pole sticking out. For when you want Goku to hold his weapon he has a separate extended pole he can wield, and to make sure everything is consistent, the handle on the holstered pole is removable preserving the illusion of an empty sling. His hands pop off and on just like Vegeta’s, though here I’m a little more concerned about eventual damage. Goku has some skinny arms, and the pegs his hands snap onto are even skinnier. Thus far, I’ve had no issues, but I probably won’t be switching poses too often with this one, at least with hand placement. Goku also has a pair of swappable tails, one that’s more natural and another that’s running up his back for when he’s seated. Rounding things out is Goku’s prized “Grandpa,” the 4 star Dragon Ball, which appears to be in perfect scale with the character and apparently can be fitted onto a base for the Shenlong/Eternal Dragon action figure.

Kid Goku is a damn fine piece of plastic. I think I like him more than the Vegeta figure, but that’s mostly due to my fondness for the IP. He looks great, moves great, and has enough accessories to keep you entertained if you’re the sort that likes to re-pose your display constantly. If you’ve been aching for a good Dragon Ball accurate Goku, it’s hard to imagine a better one than this will come along anytime soon (unless there’s a blue gi repaint, then maybe).

This entry was posted on Monday, March 26th, 2018 at 3:30 am and tagged with action figures, akira toriyama, bandai, dragon ball, goku, sh figuarts, toei, toys, vegeta and posted in Comics, Television, toys. You can follow any responses to this entry through the RSS 2.0 feed.
« Batman: The Animated Series – “Appointment in Crime Alley”
Batman: The Animated Series – “Mad As A Hatter” »