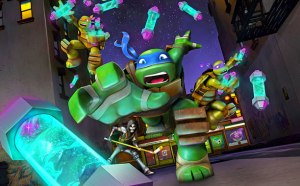 The resurgence of the Teenage Mutant Ninja Turtles has been one of the more fun story lines from pop culture for me over the past two years. With an all new comic line, cartoon, and feature film, the TMNT are almost as relevant today as they were in 1990. Considering other old properties from the 80’s have been successfully resurrected recently, perhaps it’s not all that surprising the Turtles were able to accomplish the same. What has been surprising though is how successful the relaunch has been from an artistic standpoint. The general consensus for the vast majority of new films based on properties from the 80’s is that the material has been lacking. While no one can dispute how commercially successful a franchise like the Transformers has been for Hollywood, the movies themselves come across as overstuffed toy commercials. Like the Transformers, the return to the big screen for the Turtles was decidedly lacking when the new film was released in 2014 (I’d call the film trash but I personally have not watched it and don’t plan to). However, the comic book line launched in 2012 has been pretty well-received while the television show has been a smashing success.

When the cartoon was announced by Nickelodeon I was not optimistic about its chances at success. I was borderline indifferent, but my past romance with the Turtles was enough to make me curious. I set the DVR to record season one, and by its end, I was a fan. The show is witty, action-packed, and stuffed with enough in-jokes and material to appeal to 30-somethings who grew up with the Turtles. The cartoon successfully melds the old cartoon with the comic books while also taking its own path. The 2003 cartoon attempted the same, but was probably too reliant on the original Mirage comics. The old comics are an entertaining read, though nothing magical, but they do not possess an energy that lends itself well to animation. While on the other hand, the original cartoon was set on creating a fun series that appealed only to children. It never put the characters in any real danger and would eventually lose its audience as it grew up and acquired an appetite for more mature material. When the show finally made an attempt at change, it was too late. 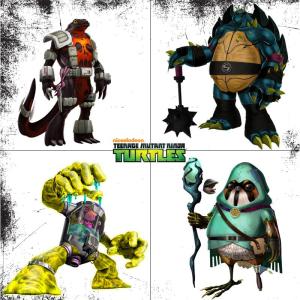 Like with season one, season two of Teenage Mutant Ninja Turtles opts for a more serialized nature with plots carrying over from one episode into another with few stand-alone episodes and characters. When a stand-alone episode does pop up, it serves as a palette cleanser from the main plot and is often a more offbeat episode. Most of these episodes are packed with humor with season two’s “Mazes & Mutants” topping the list of funniest TMNT episodes so far. The writers have found a nice balance in the humor for the show with it coming up at opportune times and resisting the urge to go for the easiest joke or pun. The show is genuinely funny, but it also knows when to let up on the humor and isn’t overly-reliant on the Michelangelo character.

Season two picks up right where season one left off with The Kraang being beaten back temporarily. Shredder and The Kraang have appeared to have forged an alliance, and an early mishap with a canister of mutagen mutates April’s father, Kirby, into a bat monster causing tension between the Turtles and their lone human friend. Meanwhile, Splinter (and this is a spoiler for those who missed season one) is coming to terms with the fact that his daughter is alive and well but has been brainwashed by the Shredder into believing she is actually the daughter of the Foot Clan’s leader and not Splinter. These two threads, April’s distrust of the Turtles and Karai’s lineage, are major plot points for the bulk of season two. The Karai plot twist could be seen coming from a mile away, but it was still effective as the writers handle it well. Karai naturally does not react well when the truth is first presented to her, and her response to it is complicated and appropriately remains unresolved for several episodes. The Kraang maintain a healthy presence throughout the season as well, often playing a role in a small way in most of the episodes. The season concludes with another big face-off between the Turtles and Kraang and it would seem the alien race will not be going anywhere anytime soon. 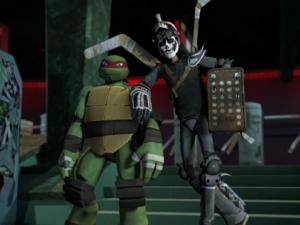 Season two introduces several characters, old and new. As was revealed in press kits, Casey Jones made his series debut in season two. Like April, he has been aged-down for the show from his original depiction but remains a vigilante of sorts. And like the Casey of old, he forms a bond with Raph pretty quickly and the two are a crime-fighting duo in some episodes. And as predicted by me (and likely many others), Casey forms the third corner of a pseudo love triangle with Donatello over April. Naturally, April is more taken with the human and this creates tension between Don and Casey that is sometimes entertaining, and sometimes feels a little stuffy, but is one of the ongoing aspects of the show that serves to remind the audience that these characters are, in fact, teenagers after all. Other characters familiar to fans of the old show that make their debut in season two include Slash, Mutagen Man, and Pizza Face while other characters are obvious references to old ones (Kirby bares an uncanny resemblance to Wingnut, for example). The show also does a good job of hinting at future characters. When a thief with a purple mohawk shows up it’s only natural for fans of the old show to assume this character has a date with a warthog and some mutagen in his future. 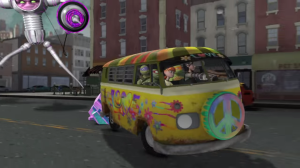 Don’t be surprised if Kirby’s Party Wagon gets a make-over in season 3.

My main point of criticism with the show early on was for its lifeless take on the city of New York, and while the show has done a better job of making it look like people actually inhabit this city, it’s still a relevant criticism for season two. The character designs though have improved. Some of the villains in season one were pretty boring to look at, and that has mostly been remedied (though some are underwhelming, I’m looking at you Tiger Claw). There’s very little for me to complain about when it comes to this show. The writers have also wisely made the Foot Clan robots in season two (and not just randomly, it’s explained in an episode) so the Turtles are free to user their weapons against them. The more graphic violence is handled offscreen, but the consequences are shown. When Leonardo gets isolated from his brothers in the season finale and beat-up by Shredder, we don’t see any of Shredder’s bladed strikes landing. However, when an unconscious Leo is tossed through the window in April’s apartment where the other turtles are holed up (awesome reference to the comic and original film, by the way) his body is cut and bruised.

Just like with season one, season two does a great job of tossing in winks and nods to the old material that came before it. They’re sometimes hidden in the background and other times in your face (the party wagon!). Shredder remains a credible threat to the Turtles throughout the season and is a more than competent ass-kicker when pressed into battle. And while the April plot is resolved during the season, the other big ones are still open heading into season three. The season concluded with an hour long special that was perhaps the best in the show’s short existence thus far. It was satisfying on an emotional level while also delivering the humor and action the show has become known for. I’m even more enthusiastic for the show’s third season than I was the second (aside from the fact that Seth Green is set to takeover the voice-acting duties for Leonardo). If you were a fan of the Turtles in your youth and still have a fondness for them residing somewhere inside of you then you should be watching this show.

This entry was posted on Saturday, September 27th, 2014 at 11:06 am and tagged with april, cartoons, casey jones, donatello, kevin eastman, kraang, leonardo, michelangelo, mirage, peter laird, raphael, shredder, TMNT and posted in Comics, Television. You can follow any responses to this entry through the RSS 2.0 feed.
« Teenage Mutant Ninja Turtles – NES
The Adventures of Ichabod and Mister Toad »