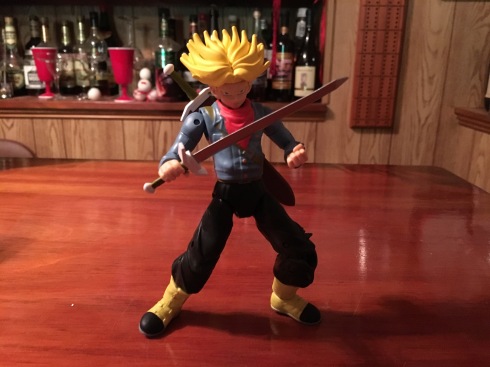 Dragon Ball Super did to me what basically every cartoon/anime does:  it made me want toys based on it. It’s a compulsion I’ve never outgrown, apparently, and Bandai has made it fairly easy (but not cheap) to get what I want. Months ago I did an entry on the SH Figuarts Super Saiyan Vegeta. That line is like the premium action figure line for Dragon Ball Z (as well as other franchises) and a single figure from that line routinely sells for over $50. Not all fans are into 6″ figures at such a price point, and even though I have two such figures I can’t say I’m really into it myself, and for those fans Bandai has its Dragon Stars brand. These action figures are more in-line with what you would get from Hasbro. They’re super articulated figures that run for around $20, which is sadly the going rate for such toys in this day and age. They often have a few interchangeable parts and also come bundled with a piece of another figure. Collect the whole line and you can assemble a sort of bonus figure. Back in the days of ToyBiz and its Marvel Legends line that bonus figure was often a giant figure twice the size of a standard one, but in today’s world it’s just a standard sized figure.

The Dragon Stars line has produced a few waves at this point. The first was basically a Dragon Ball Z wave, but the second was all about Dragon Ball Super. When I was really into DBZ and collecting toys from Irwin, I always found the majority of Future Trunks figures a bit underwhelming. When I saw the Future Trunks from the Dragon Stars line it immediately caught my eye because it felt like a figure that had eluded me for years. Even so, I passed on it several times before it finally won me over and I’m sure that was at least due in part to the Future Trunks arc airing on television from Dragon Ball Super. Eventually, I caved, picking this guy up at my local GameStop and now I’m going to tell you all about it.

Trunks stands roughly 6″ with the tips of his hair taking him a little beyond that. He’s more or less in scale with the other figures in the line (from what I can tell) and he even looks fine with the Figuarts Vegeta next to him. Since this is from Dragon Ball Super, he’s in his attire from that show which doesn’t differentiate much from his look in DBZ. He still sports charcoal gray pants and yellowish boots, the main difference being now he has a denim coat that actually fits properly and he’s tossed in a red ascot for good measure. His clothing is torn in places reflecting the harsh life he’s had to live in his future battling the likes of Goku Black. He’s in his boosted Super Saiyan form from later in the arc, which is kind of like Super Saiyan 2 in terms of looks only Trunks is way more powerful. The show never gave this form a proper name, but Wikipedia refers to it as Super Saiyan Rage. He’s armed with his trusty sword once more and his figure actually comes with two: an unsheathed sword to swing around and a sheathed one that pops into his back. He comes packaged with a pair of fists, but he also has a pair of hands that can hold the sword and a pair of open hands in a Gallick Gun/Burning Attack position. Lastly, he comes with the head of Fused Zamasu which looks pretty awesome and does kind of make me want to collect all six figures in the wave to complete the figure.

Trunks’ range of motion is pretty typical of a modern action figure. He has ball joints virtually everywhere and his hands pop off and on easily enough. His head is really limited though and I think it’s due to the collar on his jacket. He’s kind of always looking down slightly. His arms are also hindered a bit and he doesn’t possess as much range of motion there as one would think. For instance, he can’t really do a proper Gallick Gun pose or really cross his arms. The cuffs on his sleeves also prevent his hands from pivoting back much. The legs on my figure are also a little loose, but not enough to make it hard to pose or stand him. In the end, he can do just enough to make it interesting to mess around with him on a shelf, but I can see feeling a bit let down as far as the articulation is concerned.

When a figure feels a bit lacking in the pose department, I often turn to the sculpt for value. In truth, the sculpt is the most important part for me since my figures just end up on a shelf. In the case of Trunks, the sculpt is pretty good for the price. If this were a $60 figure, I’d probably be disappointed, but as a $20 he’s solid. The hair looks good and it’s a nice, vibrant, yellow. He has a determined, serious, expression on his face which is befitting the character. The jacket and pants look good with enough little texture details to make them interesting. The sculpt also hides the articulation well giving him a clean look. The boots, oddly enough, are perhaps my favorite part as there’s some nice detail here. His sword and scabbard also look nice and clean. I’m guessing Bandai opted for this approach over a traditional sword that fits into a scabbard so that it didn’t have to compromise on the actual size of the sword. Cartoon swords tend to be illustrated much larger than the actual scabbard they’re supposed to fit into so I consider it a nice touch.

So what’s missing? Well, in addition to the articulation shortcomings it should be pointed out that this figure could have wowed in other ways. Not having a non Super Saiyan head is kind of a disappointment considering it doesn’t look like we’ll get a figure of that down the line. It’s not even really a cost issue as he has a second head, it’s just not a second Trunks head. It also would have been neat to see him come with his Hope Sword, but it also wasn’t something I expected. 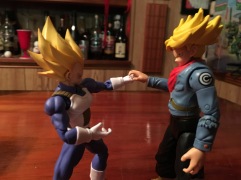 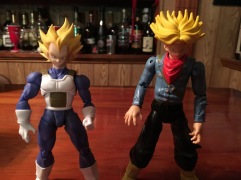 Considering this is the first Dragon Stars action figure I purchased, did it sell me on the line? Yeah, it kind of did. I don’t really want to get too far down the line with another series of figures, preferring to stay in my lane of TMNT and Bucky O’Hare, but I could see myself getting a few more. The other five figures in this wave were mostly good, the only one I did not care for was Super Saiyan Blue Vegeta who has a weird face sculpt. These things tend to sell out though, so I don’t expect to run across any in a discount bin other than maybe Zamasu or Hit. I do like this look for Trunks though, and I really enjoyed his arc in Dragon Ball Super. I enjoyed it so much that I’m really tempted by the upcoming SH Figuarts version of this same figure due out later this year. That one actually has the things I would have loved out of this figure including a normal head and the Hope Sword. About the only thing it lacks is a standard Super Saiyan 1 head and an affordable price. At $65, it may just be too rich for me, but at least I have this one which is pretty good on its own.