In case you haven’t noticed or do not frequent this blog, I have quite a passion for Christmas. As a kid, my enthusiasm was directed at the holiday thanks in large part to the toys and such. As an adult, that enthusiasm has been transferred more towards the season and the build-up to Christmas. I like to indulge in it, but once Christmas comes and goes it leaves me feeling rather blue. This year though, December 26 had a bright spot when a package from Boss Fight Studio arrived at my doorstep containing the latest from the toy maker’s Bucky O’Hare line – the Storm Toad Trooper.

Boss Fight Studio has designated the Storm Toad Trooper as figure number 7 of its Bucky O’Hare line, but due to the presence of variants in the line, it’s actually sculpt number 4. This gives BFS a release schedule of a tidy 2 new sculpts per year so far. For what is essentially a niche line that’s pretty reasonable. This isn’t Hasbro with a Marvel license, after all. Plus these suckers aren’t exactly cheap, so having time to save up is not a bad thing, especially for an army builder like this one. This figure represents the first villain of the wave, and as it is of the lowly trooper (described as “Laser Fodder” on the card) there is a temptation to buy more than one. Like the more popular Storm Troopers from the Star Wars universe, these bad boys are all bark and no bite. They couldn’t hit a moving target to save their life and are constantly brushed aside by the good guys of the series. And while they strike a mean pose, our heroes are likely only shaking in their boots when encountering a horde of them as opposed to one.

The Storm Toad Trooper stands a tick under 4.5″ and is about as tall as Jenny. He’s noticeably taller than Dead-Eye and Bucky (when ignoring his ears). As far as the source material goes, it’s a bit hard to say as the toads of the cartoon are often hunched over, but it looks about right. These figures, as far as I know, are done to the specifications laid out by series creator Larry Hama who had figures in mind when he originally designed them. The cartoon may have possibly used a slightly different scale, of that I don’t know, but it passes the eyeball test. Because these are to Hama’s designs, the Trooper is different in the area of color scheme with his animated counterpart. Those characters wore a blue suit, but these guys sport a black one like the blister card picture. They’re also more detailed as the show simplified some of the designs a bit for animation, a common practice. Just comparing him with the blister art and he looks pretty damn exact with the only difference I see being a tank on his rifle that isn’t present on the toy’s version.

As the principal grunt of the Toad army, the Storm Toad Trooper has a Hasbro equivalent from the old line. Despite his lowly status, it was one of my favorite toys from that line because of how much I enjoy the design of this character. He’s very expressive and has a fun, toon, look to his mouth and eyes. The dark green helmet that sits flush along the pale green skin of the head is just so pleasing to me. The green and black also works well together, and the gold and pink accents in the belt and eye lens really pop. I love the hot pink of the weapons too as it’s such an of its era touch and I’m happy no one decided to try and update the look with something more real world, or opt for the light blue occasionally used by the cartoon. Speaking purely on aesthetics, he might be my favorite of this line so far and that’s no small praise given the rest.

Moving beyond just the look of the figure reveals so much more. Boss Fight Studio made the helmet removable, which feels like a brave move given how flush it’s supposed to sit on the character, but it looks fantastic. You would have no idea it’s removable just by looking at it, but it’s relatively easy to pop off and it snaps back on in a very satisfying manner. Underneath the helmet is a detailed headsculpt with camouflage-like green spots. There’s a gap in the head for the helmet to snap into, so this isn’t a toy you would display without headgear, but given how well the helmet works I’m not sure if it would have made sense to try and accomplish this in another fashion. He comes with three additional hands to go along with the stock weapon-holding hands. Two open palms and a pointing finger, which feels fairly standard. His weapon outlay is a bit more robust as he comes with a rifle, pistol, and sickle-shaped bayonet. He can hold the bayonet like a weapon, or it can be attached to the rifle by removing a piece of the rifle’s stock, which I suppose could then double as a grenade. The weapons click into his belt nicely, and his hands are all easily removable which is an aspect of these figures that seems to be improving with each new figure. In addition to all of that, he also has a second head, which is a first for this line as the previous figures just had swappable face plates. The second head sports a different expression, though both could be described as angry and aggressive. There’s also a hat he can wear instead of the helmet.

The articulation and build quality is what consumers have come to expect from this line and Boss Fight Studio in general. All of the joints are affixed to plastic ball joints which make posing easy. The ball joints also practically ensure you won’t accidentally break your figure when posing, as they’ll simply pop off if too much force is placed upon them. I found this figure to be pretty free and easy right out of the box, which was nice as both Bucky and the standard version of Dead-Eye were not for me and required a breaking-in period. The odd shape of the shoulder “pads” this figure sports make his arm movements a bit more restricted than the other figures, but I haven’t found it really inhibitive. The legs have a bit less motion at the hips when compared with the others, but this guy’s gigantic feet still allow for some different posing options in spite of that as he’s so easy to stand. 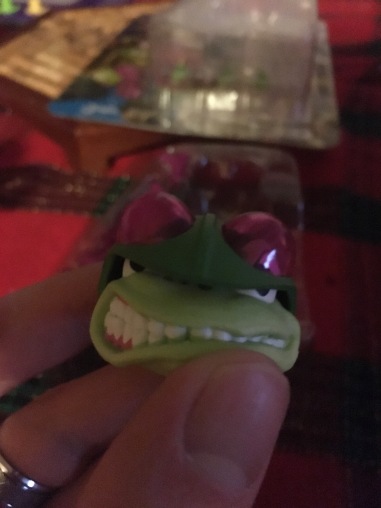 Nothing is perfect though, and I did find a few shortcomings with the Storm Toad Trooper, though nothing that would cause me to reconsider my purchasing decision for even a moment. For one, his rifle is oddly shaped and difficult to pose. I wish it had a handle behind the trigger, but this is how the gun was also supposed to look. I had to work at it a bit to get it to look okay, but I think the figure actually looks better with the pistol in hand instead and the rifle affixed to his back. The second head also gave me some trouble. I was never able to get the helmet to seat on it properly. It’s possible if I hit it with a hairdryer I’d have more success, but it wasn’t something I tried. The hat is also tough to get on as it doesn’t really click-in nicely like the helmet. With some effort though, I did get it to sit properly on the second head. As long as it fits on one I’m happy.

Still probably not a threat

They got you now you rascally rabbit!

Like the other figures in this line, the Storm Toad Trooper retails for about $35. Knowing fans were likely going to want more, Boss Fight Studio offered an “army builder” two-pack for $65. It doesn’t feature any different packaging or anything (which I should add, the default packaging is awesome and resealable, a strong point for this line), it’s just an order for two figures, but the 5 dollar savings is a nice gesture on their part and it prompted me to buy two for myself. The inclusion of the hat and second head made it an easy call as it’s possible to display both figures I acquired while having them look different. I’ll stay at two for now, but I expect re-paints to come along eventually which could tempt me further. An obvious re-paint would be to make the figure blue and yellow to better reflect the cartoon while the Bucky O’Hare arcade game contained different color variations that would be more drastic and possibly more eye-catching. The animated series also featured the characters Frix and Frax, a pair of twins that wore Storm Toad Trooper uniforms but with an admiral-styled hat instead of a helmet. Such a variant would be more costly for BFS as it would require new heads, but it would be another opportunity for a two-pack as fans would want a figure for Frix and one for Frax. It’s likely something they’ve considered or will consider, though I don’t know if I would go so far as to say it’s likely.

The Storm Toad Trooper is an excellent addition to Boss Fight Studio’s Bucky O’Hare line. He looks great among the other figures and the addition of the hat and second head make buying two feel like a necessity. The build quality is excellent, and just like the other three figures it’s easy to make a case for this being the best one yet. I look forward to seeing what’s to follow for this figure in the form of variants and re-paints, as you know there’s at least one to follow. As for the line itself, Boss Fight Studio has already announced that the next figure will be Bruiser and he’ll be going up for pre-order in January. He’ll be the first figure to really bust the mold on this line as far as size goes as he’s much larger than the other characters. As such, Boss Fight Studio has already announced he’ll retail for more than the others, but the prototype they’ve shown off is something special to behold. They also teased another sculpt is pending approval by Continuity Comics so it looks like the company is on-track to maintain its output of two new sculpts per year and I can’t wait to see what’s next. In the meantime though, I’m quite happy with what I have and I’ll be looking to come up with some fun displays between now and then.

This entry was posted on Thursday, December 27th, 2018 at 12:27 pm and tagged with action figures, boss fight studio, bucky o'hare, continuity comics, larry hama, storm toad trooper, toys and posted in Comics, Television, toys. You can follow any responses to this entry through the RSS 2.0 feed.
« Dec. 25 – A Jetson Christmas Carol
Batman: The Animated Series – “Fire From Olympus” »