It’s been awhile since we’ve had some new Bucky O’Hare stuff to talk about from Boss Fight Studio, but the wait is over and BFS is setting us up for a nice exit to 2018. Up first, is the variant Corsair Canard Dead-Eye Duck. This action figure is a re-paint of the Series 2 Dead-Eye released earlier this year, but with some added touches to make him more than just a simple re-paint.

If you have not been following along with the releases put out by BFS, then let me fill you in with one word:  fantastic. Boss Fight Studio has released three original sculpts so far and they’ve been among the best action figures released in the past year and Dead-Eye is arguably the best. The four-armed duck is a really fun character to bring to plastic. He’s a wise-cracking gunslinger and his personality shines through in the sculpt by BFS. I absolutely loved that first release, but this one is even better. His joints are all tight, but easy to work with. His interchangeable bills are easy to swap in and out and so are his hands (which are the same as the ones included in the first version). That was my one complaint with the first Dead-Eye, stubborn hands, but with this version they’re easy to pull out and re-insert. He also comes with more than double the firearms as before. It’s the same set of four, but doubled with two additional Bucky-styled guns included for good measure. Do we need all of these guns? No, but I’m happy to have them.

Structurally, this version of Dead-Eye is superior to the first one, at least when comparing the two figures I have. Maybe my original Dead-Eye was a bit harder to work with than most, and maybe by variant is better. What determines which version you prefer though will likely come down to the color scheme. I am partial to the original, as I pretty much always have been when it comes to variants and costume changes. That doesn’t mean I don’t like what BFS did with this one. This version of Dead-Eye is supposed to represent his appearance before the comic and animated series timeline began when he was a pirate with the Corsair Canards. It’s a part of the character’s life that has never been examined. Had the comic or series been more successful then maybe it would have been, but for this figure it’s essentially “made up. It’s my understanding that creator Larry Hama had input on this color scheme, so I suppose it’s canon, if that’s important to you. Since this is the same figure, the actual costume is the same, just colored differently. Instead of an orange and red scheme, he has a purple and neon green color scheme. It’s definitely loud and outlandish, but has such a 90s vibe to it that I can’t help but be charmed by it. 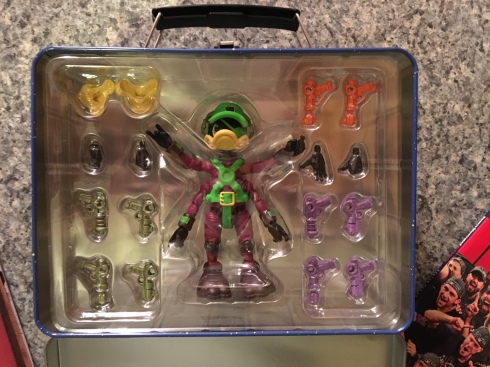 The figure comes packed in an easily removable blister that fits snug inside the lunch box. I miss the card stock, but this is pretty slick.

Making this variant a little more special than the variants we’ve seen before is the packaging. For this one, Boss Fight Studio decided to package the character in a tin lunchbox with Bucky O’Hare artwork all around. It’s basically stock promotional artwork that you’ve probably seen before, most notably on the cover of the NES video game. It’s bright and detailed and looks great. There are no dents or imperfections anywhere on my set, which I acquired through Big Bad Toy Store which had an exclusive pre-order window for the item (you can now buy it there and direct from Boss Fight). A nice touch on the lunch box that I enjoy are the character portraits that wrap around it. Most look like they were probably the portraits that were going to be used on the cards for the Wave 2 Hasbro figures that were cancelled before release. Will these characters get a second chance at life through Boss Fight? Only time will tell. 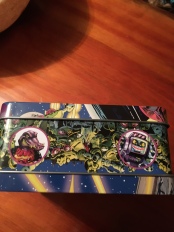 Because of the special packaging, this version of Dead-Eye will cost a few more bucks than a regular release figure. Big Bad Toy Store sells him for $42.99 where he’s currently in stock and BFS sells him for the same. I think he’s a superb figure, but I understand if some people aren’t interested in a lunch box or neon variant. If you’re holding out for a truly new figure, well then I have good news as the Toad Storm Trooper is nearing release. No word on when that figure will start shipping, but I think it’s reasonable to expect him to make it out before the end of the year. And when that figure does arrive, you can expect a review here. For now, I will busy myself with my radical pirate duck figure.

This entry was posted on Thursday, November 8th, 2018 at 12:11 pm and tagged with action figures, boss fight studio, bucky o'hare, corsair canard, dead-eye duck, larry hama and posted in Comics, Television, toys. You can follow any responses to this entry through the RSS 2.0 feed.
« Batman: The Animated Series Blu-ray Collection
Batman: The Animated Series – “Blind as a Bat” »