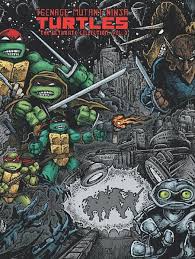 There was a time in my life when I thought I was done with the Teenage Mutant Ninja Turtles.  They had dominated my childhood, but come the early 90’s I had mostly moved on.  I still had a soft spot for them, but their cartoon had become too predictable, the toy lines too ridiculous, and I was already on to my next obsession.  When the television show moved to CBS’s new Saturday morning block the studio revamped it, giving it a darker look in an attempt to mature the series to better appeal to changing tastes.  It didn’t last long in this new format, and the Turtles began to fade away from the mainstream.  In 1997 Fox and Saban Entertainment brought the four-some back for a new live action show, possibly to try to appeal to fans of the Power Rangers, but the show only lasted one season and 26 episodes before being cancelled.

The Turtles mostly vanished from television after the cancellation of The Next Mutation.  It seemed like they were now destined to become just a memory of a silly era where anthropomorphic characters were all over the place in children’s programming.  Something people in the future would look back on and say, “What were they thinking?”  Then a funny thing happened, and the Turtles were suddenly relevant again.

It all started with Fox and 4Kids Entertainment revitalizing the franchise thru a new cartoon developed in collaboration with Peter Laird’s Mirage Studios (by this point in time, co-creator Kevin Eastman wasn’t involved with the TMNT) that premiered on Fox’s Saturday morning cartoon block in early 2003.  Simply titled Teenage Mutant Ninja Turtles, this new series adapted the original Mirage comics more faithfully then its predecessors while still keeping the show appropriate for younger viewers.  The Turtles had an edgier appearance with blank eyes and a more lean appearance.  Each one had a personality mirroring the ones from the original comic.  Really, the only holdover from the wildly popular 80’s cartoon was the unique bandana color for each turtle.  At times, the show almost directly paralleled the old books before the creators started to branch out and do their own thing, but the show worked and the Turtles were once again relevant.  This helped get a new movie green-lit that was eventually released in 2007, titled TMNT, and has helped keep the franchise alive to this day.  Now the Turtles are owned by Nickelodeon with IDW handling the new comic book line.  A new show and a bunch of new toys (including these awesome retro themed ones) are slated for release later this year in addition to the ongoing comic run now headed by Eastman.  Along the way, IDW has chosen to give the old fans some new collections to thumb thru, and my old Turtle-fandom is back in full-force!

Michaelangelo’s solo issue, featuring the debut of Klunk the cat.

I already talked about IDW’s first release of collected works, and now I’m ready to talk about Volume 2.  Volume 2 is another high-quality release and contains issues 8-11 of the original run, plus the micro issue one-shots for Michaelangelo, Donatello, and Leonardo.  The cover contains new artwork done by Eastman, though it confusingly includes the Triceratons and Fugitioid who don’t appear in this collection, but looks nice.  The interior has been enhanced to a larger size, like the first volume, and is kept in its original black and white.  Each issue is followed by reflections from both Eastman and Laird.  For this collection, Laird has contributed more thoughts and it looks like he was a more active participant.  It’s particularly interesting to read the comments for the later issues when the two discuss their fraying relationship with each other.  Neither guy takes shots at one another, and both come across as sincere when they express their disappointment for how things turned out.

The issues covered by this collection essentially wrap-up the original run of the books.  After issue #11, more people were brought on board and Eastman and Laird didn’t really work together any longer.  The Turtles were also exploding on television and the first movie was in production for a 1990 release.  The issues bring the Turtles back to earth following their exploits in space, and outside of a couple of issues, the story-lines are more reality based this time around (when one ignores the fact that the protagonists are walking, talking, fighting turtles, of course).

The first few issues have a sort of one-shot feel to them as the plot-lines do not tie in with any of the previous narratives.  Issue #8 was a collaborative with Dave Sims’ Cerebus the Aardvark, a comic at the time Eastman was said to be particularly fond of.  It’s some wacky time-travel thing that sees the Turtles accidentally warped to Cerebus’s medieval setting where the two join forces.  There’s some decent humor here, but for someone who isn’t a fan of Cerebus, the cross-over appeal was lost on me and I was interested in getting back to the New York setting.  Issue #9 is a flash-back of one of the Turtles’ earliest outings that sees Splinter switch bodies with a dying master in Japan.  While still containing a supernatural element, I enjoyed this one more than issue #8 as it felt more like a traditional TMNT adventure and it was fun seeing the younger Turtles do their thing.  Design wise, Eastman and Laird gave the Turtles full bandanas that covered their heads which was kind of a cool look.

The micro series for Mike, Don, and Leo are interwoven throughout the collection.  Mike and Don’s are more of the one-shot variety, while Leo’s directly ties into the next arc for the comic.  In Mike’s, we get to see the youngest of the Turtles foil a robbery on Christmas and make a new friend out of a stray cat he dubs Klunk.  It’s a fun chance to see Mike go off on his own and adds depth to the character.  The issue would eventually be used as inspiration for an episode of the 2003 cartoon titled “The Christmas Aliens.”  Donatello’s one-shot, “Kirby and the Warp Crystal,” would also be adapted for the cartoon as “The King.”  This issue was Eastman and Laird’s tribute to the legendary Jack Kirby.  Initially, the two wanted to rasie money for Kirby who was in a legal battle with Marvel Comics over licensing fees.  In the old days, writers who worked for Marvel worked under a work-for-hire agreement and anything they created was the property of Marvel and Marvel alone, meaning they saw no royalties for other works using the characters they created.  Kirby and his family refused to take Eastman and Laird’s money, but the sentiment was likely still appreciated.  The story is kind of fun, and it’s obvious the two had great affection for Kirby’s work as his influence is all over the series.

The Leonardo one-shot is probably my favorite from this collection as it kicks off the plot that re-introduces The Shredder.  This book and the following ones would be adapted in part for the first film.  In Leo’s book, he gets attacked by the returning Foot clan and eventually overwhelmed (in the film, it’s Raphael in place of Leo).  The encounter spills over into April’s apartment as the issue ends with Leo crashing thru the window and warning his brothers that The Shredder is back.  The full-page illustration is one of my favorites from the series.

From here, the Turtles are attacked by the Foot and the action takes them into April’s antique shop.  When things are looking bad, Casey Jones shows up and aids in their escape but Shredder sees to it that April’s store (and home) is destroyed in the process.  From here, the story takes us to Northampton, Massachusetts where Casey’s grandmother has an old farm house.  Issue #11 is told mostly thru the eyes of April as she writes in her journal about how the Turtles cope with defeat and how she deals with the loss of her father’s antique shop.  I’ve been critical of Eastman and Laird’s writing in the past, but here they do a nice of job of presenting their theme for the story with care and levity, making this issue (and arc) their best yet.  The overall theme of issue #11 ends up being to appreciate what is most important in life, and not to place too much importance in material things.  The issue ends with the Turtles coming together as both April and the gang arrive at that same conclusion simultaneously.

Overall, I think I enjoyed Volume 2 more than I enjoyed Volume 1.  The writing is tighter and more focused, and the micro issues really do a good job of adding depth to the characters.  Eastman and Laird are also able to bring out the individual personalities for each turtle in the other issues as well, and they’ve all finally had their traits firmly established by the end of the collection.  I’m still a bit surprised that the Leo/Raph rivalry hasn’t been hinted at yet, though perhaps I’ve been misled and that is a dynamic that was added to the group by outside sources before Eastman and Laird considered exploring it.  It’s also a lot of fun seeing the stories for the first time that ended up making it into the movie I saw so long ago as a kid.  It makes me appreciate that film even more.  And while most of the books were lifted in a more thematic sense for the film, the scene where Don and Casey work on the old truck even had some of the dialogue lifted word for word.  Only in the comic it’s Raph in place of Don and some of the insults are different.  There is a sense of finality at the end of the collection, especially in the write-ups from Eastman and Laird, but a volume 3 is on the way that will cover issues #12, 14, 15, 17, and 19-21 which contains the “Return to New York” story-line.  Following that arc, Eastman and Laird had little direct involvement with the comics so it figures that volume 3 may be the last for the The Ultimate Collection.  It is possible a fourth volume could be produced covering the massive “City at War” arc that spanned 13 issues and was co-written by the original creators.  Volume 3 is currently due out in July, though don’t be surprised if it gets delayed as both of the previous collections were.  I’ve really enjoyed the fist two volumes, and already have volume 3 pre-ordered!  For longtime fans, I suggest you do the same.

This entry was posted on Sunday, May 27th, 2012 at 12:12 pm and tagged with eastman, idw publishing, laird, mirage comics, TMNT and posted in Comics. You can follow any responses to this entry through the RSS 2.0 feed.
« The Hyperkin SupaBoy!
Dragon Ball – Season Two »