Last Summer I acquired the entire series of Dragon Ball on DVD when amazon.com was having a big sale on anime.  I had seen some of the series, but not all of it, and what I had seen was edited for television.  I had always wanted to revisit the series as the little of it I saw was charming, but just never got around to it.  That sale presented the perfect opportunity and by summer’s end I had seen every episode.  In December of last year, I made my first entry on the subject and promised to review the entire series on a season by season basis.  My initial idea was to post one review a month, but as is plainly obvious considering it is now past Memorial Day, that didn’t happen.  Better late than never!

Season one ended with Goku striking out on his own to find his grandpa’s four-star dragon ball.  By taking Goku and sending him off on another adventure, it brings the series back to how it started, only this time Goku is flying solo.  Let’s get it out of the way up front:  season one of Dragon Ball is the best season.  Everything is new and fresh from Goku’s indomitable will to Master Roshi’s inappropriate advances towards the show’s female characters.  That’s not to say the rest of the series is lackluster, not at all, but some of the shine does ware off.  Akira Toriyama must subscribe to the theory that you should stick with what got you there.  He’ll re-use a lot of the same gags and gimmicks, and while Roshi’s perverted nature is usually pretty funny, the more dramatic elements become tiresome (such as when a villain disappears in a cloud of smoke and the heroes foolishly think it’s dead, oh yeah, that one will be used a lot).

While Toriyama is comfortable sticking with what he knows, changing the show’s focus to just Goku is a pretty bold move.  He has essentially removed the entire supporting cast from season one (I should point out, the “seasons” are pretty much arbitrarily broken out by Funimation for the localization process and DVD releases and aren’t true seasons in the literal sense) and is relying on Goku to carry the show.  That doesn’t mean Goku is going to go it alone entirely.  Along his travels he’ll meet several new friends and many new foes.  Some exist to better serve the plot, and some for comic relief, but there are some pretty good characters introduced in season two that will make a lasting impression on the series and our hero. 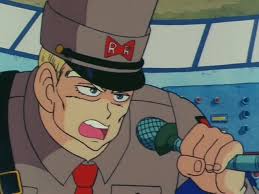 The major conflict of season two revolves around Goku V.S. the Red Ribbon Army.  The Red Ribbon Army (RRA) was introduced at the tail end of season one and is an organization after the dragon balls(what else?).  Emperor Pilaf was the main villain in the first part of season one and he too was after the dragon balls, but at no point does the audience consider him a threat.  He’s a bumbling sort of villain used mostly for comedic relief.  Even Goku has trouble remembering who he is and clearly doesn’t take him seriously.  The Red Ribbon Army, on the other hand, is well equipped to give our hero fits and is considerably more dangerous than Pilaf.  Early on, that won’t be quite as clear as they feel out Goku and learn (slowly) that conventional means will have little to no effect on him.

While some of their membership is quite nefarious, others are here to make us laugh.  When Goku’s travels lead him to a remote mountain village he agrees to help free their chief, who has been captured by the RRA.  This brings him to Muscle Tower, where he has to work his way from the bottom to the top in true video game fashion.  Along the way he encounters various foes, including the imbecile Ninja Murasaki.  Initially Murasaki seems like a foe worthy to take on Goku, but over the course of several episodes we realize that isn’t the case.  Their encounter is best described as slapstick and there’s some nice visual gags (particularly when Murasaki has a painful encounter with Goku’s power pole).

Along the way Goku encounters his first android.  Dragon Ball Z fans know the androids as homicidal robots created by Dr. Gero with the sole purpose to kill Goku, but Goku’s first android encounters go much different.  One is the Arnold Schwarzenegger inspired Major Metallitron.  He’s pretty much a rampaging killing maching, but Android 8 ends up being a gentle giant.  The Frankenstein-inspired 8 is quickly dubbed Eighter by Goku and they become fast friends.

Muscle Tower ends up being little trouble for our hero (hope that isn’t spoiling anything), but when Goku doesn’t find his beloved 4-star dragon ball, he seeks out Bulma once more.  This brings the old gang together for The General Blue Saga.  This saga further brings along the RRA and introduces the pirate robot too.  The heroes (Goku, Krillen, and Bulma) go on a wild run thru the maze-like undersea base of the RRA and there’s a lot of action and a healthy dose of comedy.  The saga runs perhaps a touch too long but it’s good to have Bulma and Krillen back in the fold for a few episodes.  As the name of the saga implies, General Blue is the main adversary here and he has enough tricks that he can put up a fight against Goku, something few have managed up to this point.  His “threat” is kind of short-lived and he soon ends up as another slapstick villain, especially when he and Goku end up in Penguin Village where things get a bit weird.

Mercenary Tao ends up being Goku’s most formidable opponent yet.

The last part of the season has Goku off on his own once more.  The RRA send the famed Mercenary Tao after him this time, who actually proves to be a very capable opponent for the young hero.  Here, Toriyama will employ an effective tool for the first time to get the viewer emotionally invested in the conflict:  death.  Tao is a cold-blooded killer with no redeeming qualities, and Goku figures this out pretty quickly.  He’s a true threat, and the season ends with Goku setting off on a strange quest of sorts to gather enough strength to make sure he can stop Tao for good.

Season two contains a lot of the charms that made season one so enjoyable.  Goku is off on his own for a large portion of it, but he’s never truly alone as other allies fill the void.  Few of these allies are as entertaining as Bulma or Master Roshi, but it’s nice to change things up.  Of the new characters, I find Blue, Tao, and Korin the most interesting though Korin only appears in the season’s finale.  Season three is probably a little better as Goku’s conflict with the Red Ribbon Army gets ratcheted up a notch and the next round of the World’s Martial Arts tournament begins again.  Season two establishes Dragon Ball as a fun and pretty consistent television show.  Don’t watch it for depth, just watch it for the sheer enjoyment of it.

This entry was posted on Thursday, May 31st, 2012 at 9:14 pm and tagged with akira toriyama, anime, dragon ball, goku, toonami and posted in Television. You can follow any responses to this entry through the RSS 2.0 feed.
« Teenage Mutant Ninja Turtles: The Ultimate Collection – Vol. 2
What to Make of E3 2012? »