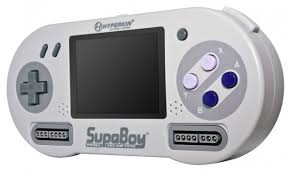 My interest in portable gaming has always exceeded the reality of how much time I spend with it.  From the very beginning, I’ve always been enamored with the concept of shrinking down a home console and taking it on the road.  I was positively thrilled the first time I saw a Gameboy cartridge and how it looked pretty much exactly like a miniature NES cart.  The Gameboy also had the same color scheme as the NES and boasted its own versions of Mario, Zelda, and Metroid.  However, while the physical game may have looked like a mini NES cart, the actual games were not on the same technological level.

I touched on this concept when talking about the new Playstation Vita.  The Vita has a cool cross-platform feature that allows gamers to share save files between Vita games and their PS3 counterpart.  It’s an expensive feature, but a cool one.  And while Vita games aren’t quite on the same technological level as PS3 ones, they’re fairly close and some less-demanding titles are nearly identical in looks and features.  This is pretty close to having the home console experience on the go.  Before the closest anyone had got to this was Sega when it released the Nomad in the mid 90’s.  The Nomad was a portable Genesis that could also be used like a home console.  It was pretty cool, but the system’s wretched battery life made it portable in concept only.  The thing basically went thru an entire package of batteries in one session.  Sure you could use an AC adapter as well, but sometimes a power outlet isn’t readily available when you’re on the go.

Apparently I’m not the only intrigued by the idea of being able to carry a console in my pocket as recently clone systems have gained in popularity.  For those unfamiliar, a clone system is a console created by a third party that mimics the original first party offering.  Since these companies that create these systems owe no allegiance to Nintendo or Sega, a clone system can be compatible with multiple systems.  One of the most popular ones is the Retron 3 which has a cartridge slot for NES, SNES, and Genesis games.  The quality of these machines is definitely not up to par with the originals, and often some software gives them issues, but for the most part they get the job done.  Lately, portable clone systems have started to show up in greater frequency which is what brings me to the subject of this post:  Hyperkin’s SupaBoy.

The SupaBoy is a portable Super Nintendo.  It is a true console for the commuting gamer.  Sure the technology is nearly 20 years old, but it’s a Super Nintendo, arguably the greatest video game console of all time!  It uses a standard SNES game cart and, as best I can tell, can play pretty much every game released for the SNES.  Now, that statement isn’t without some controversy.  When the SupaBoy was first released, several gamers took to youtube to review it and comment on what games worked and what didn’t.  The big culprits with any SNES clone system are Super Mario RPG, Star Fox, and Earthbound.  SMRPG and Star Fox cause problems because of the graphical technology needed to power the games (Star Fox, if you recall, famously made use of the Super FX chip) while Earthbound has a unique feature to prevent it from working on pirated consoles that causes the game to overload the screen with non-player characters and enemies, making it virtually unplayable.  The first batch of SupaBoys appeared to not work with these games, as well as others, though there was some confusion over Super Mario RPG and if it mattered where the game was manufactured.  Since Hyperkin released the second round, more videos have popped up of users getting these games to work.  I don’t at present have any of the games alleged to not work, so I cannot confirm anything.  Buyer beware.

Hyperkin wisely played to the nostalgic crowd when it designed the SupaBoy as it looks exactly like an oversized US SNES controller.  It has the same color scheme and the buttons and D-pad are in the same style.  Start and Select had to be moved but that hardly takes away from the look of the machine; it’s pretty cool.  Hyperkin also added two controller inputs to the front of the system so this bad boy can be hooked up to a TV with the included AV cable and used as a standard SNES.  The system is big, but feels good in the hands.  It’s made of hard plastic, and though it’s definitely not of a high quality in terms of feel, it’s better than expected.  On mine, the D-pad feels a little funky, it has more play on one side, but it works fine.  The buttons are very “clicky” which makes it kind of a noisy system to play.  There are games I won’t play on the train as they’d just be too noisy and would likely irritate the patron sitting beside me.  Because SNES game cartridges are fairly large, the SupaBoy has to be large to accommodate.  As a result, this isn’t the most portable system around as it’s not likely to fit in your pocket.  In a backpack sure, but it’s got nothing on the DS, for example.  And since the game carts are so large you’re probably not going to carry too many around, but beggars can’t be choosers.

Enough of the specs, how does it play?  Quite well.  When plugged into a TV, it looks no different to me than my old SNES.  The picture quality is sharp, the audio is good, and I haven’t noticed any new glitches or slowdown.  On the go, it also looks and plays great.  The color palette on the system’s screen is perhaps slightly darker, but it’s just as clear as it is on a television.  It does take some getting used to, but after 10 minutes or so I found myself fully immersed in the gameplay experience.  So far I’ve only tried three titles on the system:  Super Mario World, Turtles in Time, and Super Metroid.  Of the three, I’ve spent the most time with Super Metroid as I work my way thru that classic title.  I’ve switched between playing with a controller and playing with just the SupaBoy and I don’t notice any change in how well I play the game.  The experience is fully realized when using the SupaBoy, which is exactly what I was looking for.

I suspect a fair majority of the hits I end up getting for this blog post will revolve around the hardware itself.  Specifically, the audio.  Take one look at the SupaBoy on amazon.com and you’ll notice several reviewers complaining about the audio.  On a lot of models there was a defect that caused a high pitch sound to come over the speakers.  There apparently was no fix and owners either returned their system in hopes of getting a better one or learned to deal with it.  When I purchased my SupaBoy I was told this had been fixed and the audio screw-up was isolated to the first batch of systems produced.  So far, this seems to be true as I haven’t had any issues.

Another common complaint with clone systems is that the pin connectors are inferior in some way.  This is a common complaint with another Hyperkin product, the Genesis portable clone the Gen Mobile, which became popular enough to even get Sega’s official branding.  On that system, many gamers have had problems removing cartridges because the pin connector is just too snug and the system ends up breaking.  The SupaBoy does provide a fairly snug fit, but it’s not too bad and I don’t feel like I’m doing any damage to the unit when I insert and remove games.  It would have been nice if Hyperkin could have included an eject button like the original console, but it seems fine.  Another concern some have is aimed at the battery and battery life.  The SupaBoy uses a rechargeable battery that comes with the system.  It’s removable too, so once it can’t hold a charge it can be replaced.  I’ve never gone longer than 2 hours with the SupaBoy and the battery indicator did not yet reach red status, indicating it would need to be re-charged soon.  Hyperkin says expect 2 and a half to 3 hours per charge, which isn’t great but is on par with current handhelds.

Not only is it a portable SNES, the SupaBoy is a fully functioning home console as well.

I purchased my SupaBoy from Game Swap USA, a Florida based retailer that sells on eBay.  My unit came with two clone controllers so I could easily play on my TV or invite a friend to play as well (haven’t tried that, but I assume it would be a bit weird sharing the tiny screen with one player holding the unit and the other playing via controller).  The system can use regular SNES attachments and can also use some other third-party devices like the Game Genie.  It does play Super Famicom games, which is pretty cool if there are any in your collection you would like to enjoy on the go.  Some PAL games work as well, but not all.

Now, it’s not all fun and games with clone systems, and unfortunately the SupaBoy is no different when it comes to that.  I found this out the hard way.  After pro-longed play the unit appears to be prone to over-heating which can cause freezing.  I had a game of Super Metroid freeze on me after I had been playing it for less than two hours.  When I turned the unit back on the next day, I found all of my save data had been erased.  Damn!  It gets worse.  I hadn’t re-charged the unit and started over my game.  After maybe a half hour the screen started to get buggy.  I hadn’t seen it do this before, but I knew I was probably running low on battery.  I immediately plugged the unit into a wall outlet and the screen corrected itself.  I turned the unit off and just for piece of mind inserted Super Mario World to make sure the unit was fine.  It wouldn’t boot up.  I figured it was due to the battery being run down so I tried it again an hour later and Super Mario World booted up fine, but with one problem:  no save data!  So, I lost my save game data that was around 20 years old.  I’ve read online some people have had this issue as well, and were able to avoid having their save data erased by reseting the unit before turning it off when it freezes.  I guess I’m going to have to be really careful and baby the Hell out of this system.

Hyperkin’s SupaBoy is not alone in the portable SNES gaming world.  Other companies have put out their own version of a portable SNES unit.  The SupaBoy appeared to get the most praise from the gaming community so it was the one I went with, but there are supporters for other devices out there such as the FC-16 Go by Yobo and the RetroDuo by Retro-Bit.  If you love classic games and think a portable Super Nintendo is something you would be interested in then I can safely recommend the SupaBoy, but do your homework first and don’t expect Nintendo-level quality.  It has its own strengths and weaknesses, but at the end of the day, it’s a freaking portable Super Nintendo, which says it all!

This entry was posted on Saturday, May 26th, 2012 at 2:08 pm and tagged with clone, hyperkin, portable gaming, retrobit, snes, yobo and posted in Video Games. You can follow any responses to this entry through the RSS 2.0 feed.
« The Simpsons – Season One
Teenage Mutant Ninja Turtles: The Ultimate Collection – Vol. 2 »