The Simpsons – Season One

The list of television shows that were on the air when I was a kid and are still on the air as I near 30 is a pretty short one.  Not including non-fiction news stories, there’s really only one that was there when I was a kid and is still airing new episodes today, and that show is The Simpsons.  There are many characters that had shows when I was younger that have shows today.  There’s always a new take on Batman or Spider-Man and I lost count when it comes to the different iterations of the Teenage Mutant Ninja Turtles (there’s a new one set to air this fall).  South Park came around when I was in my early teens, and Futurama began airing when I was in high school.  The Simpsons though, that came when I was in the first grade and it’s quite amazing that it’s still on television today.

That said, there are some that would argue the show should not still be one and that it should have ended years ago.  From a business standpoint, if people are still consuming the product and it’s making money then why not keep producing episodes?  And apparently there’s a dedicated core of fans out there that will probably watch it until they can’t.  What will ultimately end that show will be rising costs, or if enough key members of the cast decide to retire.  And even though there’s a loud contingent of people on the internet decrying the quality of the show, there’s still plenty who insist it’s as funny and fresh as ever.

As for me, I guess I’m in the middle when it comes to that debate regarding the current quality of The Simpsons, but I lean towards the side that says the show is well past its prime.  I really don’t watch it anymore and haven’t for years.  When I do catch an episode I’m usually left underwhelmed.  Rarely do I hate it, but I forget about them pretty fast.  The only one I’ll go out of my way to watch is the annual “Treehouse of Horror,” and that’s mostly just out of tradition.

Recently The Simpsons has been on my mind.  I’m not sure why.  As I see other animated programs start to lose “it” and diminish in quality, it makes me wonder how much of that stems from me, the viewer, getting bored with the same old thing or if the show is actually getting worse.  To answer this question I decided to buy the first season of The Simpsons and relive some of those cartoons that I used to watch religiously.  The Simpsons was on weekly initially, but soon had enough episodes to enter into syndication.  When I was probably around 11 or 12 I would watch an hour of The Simpsons every weeknight I was home via syndication.  I got a lot of enjoyment out of it and it was my routine, so I have a lot of fond memories when it comes to those early seasons of The Simpsons.  The die hard fans insist the show started off a bit uneven, and outside of a few special moments in the first two seasons, it really didn’t take off until season three.  I’m not sure when this golden age is said to have concluded, but I suppose it doesn’t matter.

One of the more memorable scenes from the debut episode; Homer in Santa Class.

The first season of The Simpsons is the shortest season the show had.  This is pretty common of first seasons, especially animation, as networks don’t want to order too many episodes only to see the show fail.  Half seasons are pretty typical, and the first season of The Simpsons contains thirteen episodes beginning with  the Christmas themed “Simpsons Roasting on an Open Fire” and concluding with “Some Enchanted Evening.”  Not only is the first season the shortest, it’s also the most crudely drawn.  Again, not surprising as I’m sure the budget was pretty tight, but it at least looks a lot better than the shorts that used to air on the Tracey Ullman Show.  The characters are actually less defined in their roles, though the base is still there.  Homer is dim-witted and selfish, Bart is a troublemaker, Lisa a poindexter, and Marge is a stereotypical house wife.  Maggie is there too, but being that she’s a baby there isn’t much of a personality to her.  A lot of the secondary characters are introduced as well including Moe, Flanders, and Mr. Burns.  Still, there are differences and some moments where characters act in a manner that is perhaps inconsistent with how they’ll be presented in future seasons.  Some fans consider this a negative, but I kind of appreciate these moments.  Just like a real person would do, these characters have grown and changed over time.

What I hoped to see in season one was a more focused show, less reliant on Homer’s buffoonery and more reliant on the concept of the Simpsons being America’s most dysfunctional family.  For the most part, that ended up being true.  Homer wasn’t the dominant presense that he would become and while he’s definitely not a smart man, he’s not absurdly stupid either.  There’s definitely a lot of Bart though, and there would be a lot more in season two as he was the early star of the show.  I almost forgot how huge Bart Simpson was when I was a kid and he was definitely pushed as the fan favorite.  And it’s easy to see, he’s a fun character.  He’s rebellious and does whatever he wants but does pause to let us know he’s a good kid at heart.  In his first lead episode, “Bart the Genius,” he’s actually the target and the one we feel bad for and he reacts by pulling a prank that gets overblown (and earns Bart some green skin in the process). 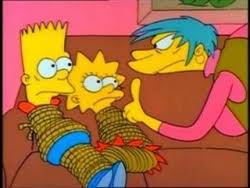 The animation was a bit more crude in the early going.

The series premiere, “Simpsons Roasting on an Open Fire,” introduces the whole family and some of the extended family (Grampa and Marge’s sisters).  We see how the family dynamic works and the themes established by the episode are still alive today.  Homer tries hard to be a good father and husband, but his low level of skills and lack of a sharp mind ultimately doom him.  And yet, they still all come out okay in the end.  From there, the writers of the show definitely wanted us to get a good look at each member of the Simpson family in season one and would devote an episode to each key member of the family.  It’s a good strategy and the writers were able to pull it off organicly.  In later seasons, it sometimes would feel like a Marge or Lisa episode was forced into the season just for the sake of having one which always drove me nuts.  Those episodes often fail because they don’t bring anything new to the table, and usually include some silly gimmick (like Marge becoming a cop).  In Lisa’s episode, “Moaning Lisa,” we’re shown just how different she is from both her peers and her family.  It’s done well enough that we really don’t need future episodes that center on that premise, but there’s dozens.

That’s not to say it’s all gravy.  Some of the episodes go for cheap laughs and the story attached isn’t very engaging.  “The Call of The Simpsons” is one such episode that relies mostly on visual gags and absurd situations.  Other episodes just don’t appeal to me too much, like “The Crepes of Wrath” which sees Bart switch places with an Albanian kid as part of a foreign exchange program.  The writers also seem to enjoy getting Homer into trouble with Marge, as it feels like their marriage is tested in every other episode.  Homer routinely does things that should probably get him in trouble, but I always felt Marge’s reaction to Homer dancing with a stripper in “Homer’s Night Out” was particularly over the top.

Some of my all-time favorite episodes are in season one though, including “The Telltale Head” and “Krusty Gets Busted.”  The first is the infamous episode where Bart cuts off the head of a statue of the town’s founder, triggering a wave of patriotic anger from the locals.  It uses the story-telling gimmick of starting the episode at the end and having the events that lead the characters into their current situation relayed as a flashback.  “Krusty Gets Busted” is the first time we’re introduced to Sideshow Bob as a villain. Voiced by Kelsey Grammer, Sideshow Bob would make many returns often with the intent to kill Bart Simpson.  Grammer is one of the few guest stars of season one, which I find immensely refreshing.  So many of the newer episodes have fallen into this trap where the writers feel like each episode needs a celebrity guest of some sort.  They also don’t follow the simple format adopted by later episodes where the plot opens with one story that leads into a completely different one.

There’s some other differences and quirks I noticed about season one that separates it from future seasons.  For one, the intro is different and I had forgotten just how different.  It’s longer and features some generic characters that would be replaced for season 2 with actual supporting characters from the show.  The couch gag is in place, but there were only a couple different ones in season one, most revolving around the theme of one character getting forced off the couch.  The premiere episode actually doesn’t feature an opening at all.  There’s some other character changes too.  Smithers makes his debut in “Homer’s Odyssey” (as does Mr. Burns, voiced by a different actor) as a black man, which is kind of funny.  Apparently this was an error and is corrected for his next appearance.  Chief Wiggum also looks pretty different as he sports black hair and an odd skin complexion of his own.  In general, there’s also less use of music in each episode as well, and the transition from one scene to the next is usually sudden which gives the show a different “feel” when compared with future seasons.

Currently, The Simpsons is nearing the end of its 23rd season with a 24th already in production.  Obviously, any show that has been on that long is going to change over the years and The Simpsons has certainly undergone numerous changes.  I don’t know if season one is necessarily better than season 23.  I definitely enjoyed reliving it, and I’m currently enjoying reliving season two as well, and my opinion is tainted by nostalgia.  It’s a simpler show and I do find that more enjoyable than the current stuff.  The characters seem slightly less typecast and are a little more exciting as a result.  And whatever your opinion is of the current season, I think we can all agree it’s pretty damn amazing for a show, especially a prime-time animated one, to be on the air as long as The Simpsons have been.

This entry was posted on Saturday, May 12th, 2012 at 11:04 am and tagged with animation, cartoons, fox, matt groening, the simpsons and posted in Television. You can follow any responses to this entry through the RSS 2.0 feed.
« Greatest Games: Devil May Cry
The Hyperkin SupaBoy! »

2 responses to “The Simpsons – Season One”