Capcom has gone thru many identities throughout its existence.  Early on Capcom made its mark with the blue bomber, Mega Man, and his blend of run and gun platforming.  Mega Man had six games released on the original Nintendo, plus many more on the Gameboy, Super Nintendo, and so on with entries in both the main series and several spin-offs.  In the 90’s Capcom would establish itself as the leader in the fighting genre.  Championed by Street Fighter, Capcom’s games were the measuring stick for all 2D fighters.  The genre exploded, and like all things popular, it eventually became over-saturated.  Capcom needed a new identity as video games headed into the third dimension.  Mega Man was a 2D experience through and through, and no one knew if Street Fighter could make the jump, so it fell onto Capcom to create a new money-making franchise.  Enter Resident Evil and its focus on what would become survival horror.  Alone in the Dark was the first game to be called survival horror, but Resident Evil defined it.  It was hugely popular and it too would spawn many imitators, but Capcom had a new hit and in a new genre to boot.

A company that has always been linked to Capcom for me is Konami.  The two had a strong presence on the original NES with Konami’s most popular title probably being Contra.  Similar to Mega Man, it too was a run and gun platformer but with a much different focus.  Konami’s other big franchise was the Castlevania series, a side-scrolling action/adventure title that popularised the non-linear format of gameplay.  When systems like the Playstation and Nintendo 64 started showing up with their fancy new 3D graphics, both Konami and Capcom found themselves in the same boat when trying to bring their classics to the new hardware.  Both had some stumbles, but Konami experienced a most spectacular failure when it came to Castlevania.  Konami arguably released the best Castlevania it had ever produced and did so on the Playstation with Castlevania:  Symphony of the Night.  Even though it was on the Playstation, Konami kept the game rooted in the 2D perspective.  It garnered quite a bit of positive press, but it was mostly ignored at retail and Konami blamed that fact on the presentation.  Feeling pressured to bring Castlevania to 3D, Konami released Castlevania 64 in 1999 and it was not met well.  The press at the time seemed to think it was okay, but time has not been kind and the Castlevania diehards were not impressed.  It’s sequel later that year was not met well by critics or fans and many wondered if Castlevania could exist in 3D. 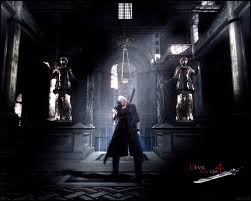 Devil May Cry went with a gothic approach for its style, which helped separate it from Onimusha and Resident Evil, but not Castlevania.

Leave it to Konami’s rival, Capcom, to get it right.  No, Capcom did not develop a Castlevania title for Konami but it might as well have done just that when it released Devil May Cry in 2001.  Devil May Cry (DMC) is one of Capcom’s greatest mistakes and best games they ever released.  It’s a mistake in that originally the game was supposed to be Resident Evil 4, but the development team would eventually realize they had something different on their hands.

When Devil May Cry came out, Resident Evil was still a bankable product.  It had also spawned a pseudo spin-off franchise in the form of Onimusha.  Onimusha had nothing to do with Resident Evil from a narrative perspective, but it was basically survival horror in feudal Japan.  It focused more on combat and was pretty successful in its own right.  Devil May Cry took that formula, and added something very familiar to gamers:  a jump button.

It seems like such a simple device, but jumping completely changed the Resident Evil/Onimusha formula.  DMC’s protagonist, Dante, could jump from ledge to ledge like Mega Man and attack from the air, leap over enemies, and soar to new heights Jill and Chris could never hope to reach.  Dante was also super-powered being a half-demon so it wasn’t like he was jumping two or three feet, he was leaping twelve or fifteen!  He could drop from any height without getting hurt, and all in all pretty much controlled like one would imagine Castlevania’s Alucard would. 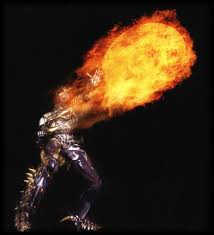 DMC is an action heavy experience, and even though Dante is a half-demon, he still needs some weapons to get thru the hordes of vile machinations and weird creatures that stand in his way.  At the onset Dante is armed with a sword and a pair of revolvers, Ebony and Ivory.  The revolvers have unlimited ammo and can be fired in rapid fashion, but do little damage.  They’re used more as a means of linking damage from one enemy to the next until Dante gets close enough to hack ’em up with his blade.  Gamers can just mash the attack button and get by some of the early enemies, but more precise timing and maneuvers are needed to progress further.  Dante has a couple of moves including a rapid stabbing technique and slower hack and slash.  Arguably, the move he is known best for is the air juggle where the player upper cuts an enemy into the air with the sword and then fills them full of bullets as they hang suspended in the air.  Other weapons change things up some, including a lightning blade and a shotgun.  There’s also the ogre gauntlets that let Dante roll with just his fists.

Both the lightning blade and gauntlets can be powered up using soul orbs that are mined from fallen enemies.  The power-ups unlocked all make Dante’s devil form more powerful.  As a half-demon, Dante is able to activate his devil trigger and morph into a demonic form for a short period of time.  In said form, Dante moves faster and does more damage.  He also has special moves that let him fly and rain lightning down on his enemies or hurl massive fireballs.  The mode is activated by filling an onscreen meter, flashy kills and general good play cause the meter to fill faster.  Activating the devil trigger can quickly turn the tide of battle and is one move the player will often keep in reserve until the time is right.

As I said earlier, the game is really action heavy and is not afraid to pit the player against hordes of enemies.  DMC really popularized the recent trend in action games like God of War, Ninja Gaiden and even Arkham Asylum to have the hero fight off a crowd of foes.  The standard difficulty setting is a suitable challenge for most gamers, but the harder difficulty settings will test any gamer’s skill with a controller.  And even though the focus of the game is on action, the game does pause for some exploration elements and even  some platforming scenarios.  The game arguably shines brightest during one of its boss encounters which often present a good test for Dante.

Visually, the game was a stunner when it was released in 2001 and has aged pretty well.  The gothic aesthetic the developers went for suits the game’s mood and the boss characters are large and imaginative (though not as massive as future installments would get).  The story is just filler to give the game purpose, and that’s fine. 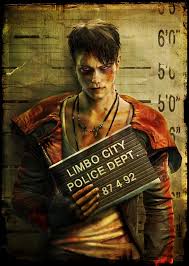 The new Dante featured in DmC. Fans have unkindly dubbed this "Emo Dante."

Devil May Cry was so obviously perfect an approach for Castlevania that Konami’s next game in the series was practically a clone.  And as I mentioned, lots of other action titles followed suit and tried to replicate what DMC had done.  The franchise was perhaps never more popular than when it debuted as it was considered a really fresh take on the action genre.  A sequel would follow in 2002 and was not met well.  Devil May Cry 3 mostly served as a make-up title, but by the time Devil May Cry 4 was released it felt like other titles had leapfrogged it.  Now Capcom is trying to rebrand the game as DmC and features a redesigned Dante.  Time will tell if this reboot is worthwhile, but for my money the original Devil May Cry is still the finest action title I’ve ever played.  When I first played it as a demo (bundled with the PS2 version of Resident Evil:  Code Veronica) it was like nothing I had played before.  It captivated me instantly and I have no idea how many times I played thru that 3 mission demo.  A gamer playing it for the first time today would not likely have the same experience, and they would be missing out.

This entry was posted on Monday, April 30th, 2012 at 8:55 pm and posted in Greatest Games, Video Games. You can follow any responses to this entry through the RSS 2.0 feed.
« Record Store Day!
The Simpsons – Season One »