In America, we’ve always got kind of the short end of the stick when it comes to high quality Dragon Ball Z toys. Sure, Irwin did some okay things with the license, which I covered recently by highlighting Vegeta, one of the more popular characters from the franchise. We would even get a few imports courtesy of Jakks Pacific who brought over Bandai’s Ultimate Fighters series. Now a days, we have more access to imports and the Internet is full of retailers who will bring these things over here. Even Gamestop and Barnes & Noble carry the SH Figuarts brand.

During the mid 2000s though we were still mostly left in the dark. While Jakks was running the line into the ground, a small toy maker named Unifive was putting out some really interesting action figures based on Dragon Ball Z. Dubbed the Ultimate Evolution series, these figures aimed to capture the many different looks of the shows Saiyan characters. It started off with Goku and Vegeta and expanded to include Future Trunks and Teen Gohan. Unifive also made other Dragon Ball Z toys, but these were the only true action figures, and they’re pretty unique.

Since they had to be imported, I only purchased one – Vegeta. Had I waited for all four to be available I may have opted for Trunks or Gohan instead, but I can’t say I’m disappointed with what I have here. During this time in my life I was a recent college graduate so I didn’t have much money for toys, and the money I did mostly went towards Marvel Legends. For a long time, this Vegeta toy was the last DBZ related piece of merchandise I had bought up until recently.

As the name implies, this Vegeta is intended to be the ultimate representation of the character. It’s intended to cover all of Dragon Ball Z from the character’s first appearance in the Saiyan Saga into the Buu Saga. As you will see, it doesn’t quite hit the mark. Unifive would do a better job of reflecting this with basically all of the other characters in this line. Part of that is a willingness to include more pieces with the likes of Trunks, and part of that is simply due to the fact that a character like Goku didn’t change much through the life of the show and manga. Vegeta had basically three distinct looks:  Saiyan Saga with tail and shoulder pads, Android Saga with the vest armor and ability to go Super Saiyan, and Buu Saga without armor and the Majin Vegeta look. There are other more minor looks like Namek Vegeta or the much loved Bad Man shirt look, but I’d say those three are the most iconic.

Unifive’s Vegeta opts to use the Android Saga Vegeta as its base and it really can’t deviate much from it. This is due to the armor being sculpted on. They could have gone with a removable chest piece and separate bare arms to approximate the Buu Saga Vegeta, or just go with a whole new torso as they would with Trunks, but they chose not to. Somewhat more frustrating is the lack of removable shoulder pads to create the Saiyan Saga look. They’re included with one of the heads, an Oozaru/Great Ape head, but not one of the normal Vegeta heads. It’s really unfortunate because the regular, black-haired head includes a removable scouter and he also comes with a removable tail and a base featuring some emerging Saibamen. It’s almost perfect, and admittedly I still do like the look of him even without the shoulder pads and skirt, but it could have been more. Also notable is that this series uses the manga for inspiration over the anime so the coloring is a little different. Vegeta is a bit darker than his anime counterpart, this choice of coloring is most notable for Trunks who had a different colored jacket in the manga. There’s a nice paint wash applied to the body that gives his muscles some added definition. The gloves and boots have a gray wash as well and there’s liberal use of shading on the armor. He’s not as brightly colored as most DBZ figures, but he still looks pretty sharp on a shelf.

Since this Vegeta does not have removable armor, he also can’t pull-off a proper Buu Saga Vegeta despite the inclusion of a Majin Vegeta head. Majin Vegeta in Saiyan armor is kind of interesting, but obviously still lacking. Ignoring the issues of authenticity, this Vegeta does boast quite a bit of accessories to make up for that. He has four heads:  normal, super saiyan, majin, and great ape. As I mentioned earlier, the great ape head includes the shoulder pads from his armor, with one being battle damaged as it were during the actual appearance of this Vegeta in the show. Since the head is molded to the shoulder pads and chest, it can’t turn, but that’s all right considering how cool it looks. Even neater, the base comes with an attachment that covers the Saibamen heads with a rock formation that a tiny representation of Goku can be placed on to give off the illusion of scaling. Vegeta also has swappable feet, the second pair being fatter than the standard to add some bulk to the ape form though they mistakenly include yellow-gold toes when that Vegeta featured all white boots. His chest and arms could use some bulking up as well, but that would obviously be a lot harder to pull off. As it stands, this a pretty neat attempt at an oozaru Vegeta. 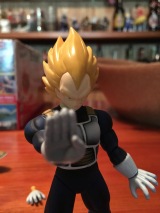 Vegeta also comes packed with several different hands for various poses. He has two fists, two open “Final Flash/Gallic Gun” hands, a Big Bang Attack hand, and one making kind of a piece sign. The only shortcoming with the hands is that the peace sign one is a right hand, but his scouter is worn over his left eye. Had it been a left hand, it would have worked as a way for him to “activate” his scouter. Speaking of which, he has a scouter with a red transparent lens. It looks great and pegs into the normal head. The other heads can’t wear it, unfortunately, but I suppose they didn’t need to. The normal head also has a peg hole in the back for a halo for dead Vegeta. I’m not sure why the super heads don’t have a peg hole, but it’s not that important. The halo is made of translucent plastic so it has a nice floating effect and is superior to the Irwin halo we saw on their Buu Saga Super Vegeta.

Each individual Vegeta head looks pretty great. The normal head features kind of a blank expression. He very much looks like Vegeta, but I would have preferred a cocky Vegeta since this is primarily his Saiyan Saga head. The Super Saiyan head is similar in that it’s a fairly neutral expression. The hair looks awesome, though there’s a weird paint imperfection beneath his left eye that is really visible in the pictures, more so than in reality. The Majin Vegeta head has an awesome arrogant Vegeta expression and is really appropriate for the character. It also sports the thick, black outline on the eyes that’s authentic to the look of that particular version of Vegeta. He even has that throbbing vein along his left temple he often sports in the anime. It’s a real shame the look of the body doesn’t match up, since this is the best head of the bunch. Though oddly, it sits real low on the neck ball peg, unlike the other heads. It looks fine and can be manipulated to look more like the others, but it takes away from his range of motion. The Oozaru head, as covered earlier, also looks great.

The body of these figures is comprised mostly of pegs and swivel joints. The only real socket joint is for the head. It’s a strange approach for creating an action figure, but it does mostly work as the figure is sturdy with a wide range of movement. Not as wide as he would have if he had ball-jointed limbs and standard hinge joints for his knees and elbows. The various pegs throughout his body means you could disassemble the figure fairly easily if you wanted to. The pegs for his hands and feet are easy to work with and they’re nice and thick so I’ve never felt I was in danger of breaking anything. It’s a figure you really have to play around with to get a feel for what kind of posing it’s capable of. I appreciate the oddball nature of it, though I wouldn’t want all of my action figures to be constructed this way.

This Vegeta figure from Unifive was a purchase I was really happy with at the time. I appreciate what it’s trying to achieve, even if it comes up short, and I find it’s construction really interesting even if it isn’t perfect. I was content with it, but not sold on it completely to the point that I even bought another figure in this line. I’m still tempted by the Future Trunks version, but given what it would cost I’d probably be better off just getting the SH Figuarts Trunks or even saving a few bucks with the Dragon Stars version. Neither achieve what Unifive tried to do, create one figure to stand-in for all of the various looks of the character, but they’re probably better action figures. As kind of a random oddball piece of my collection, this figure is pretty fun to have around and still looks good enough by today’s standards for display, as long you’re not going for a Majin Vegeta or proper Saiyan Saga look.

This entry was posted on Monday, May 14th, 2018 at 5:03 am and tagged with action figures, dragon ball z, majin vegeta, ultimate evolution, unifive, vegeta and posted in Television, toys. You can follow any responses to this entry through the RSS 2.0 feed.
« Batman: The Animated Series – “Robin’s Reckoning: Part II”
Marvel Legends Series 6 – Deadpool »