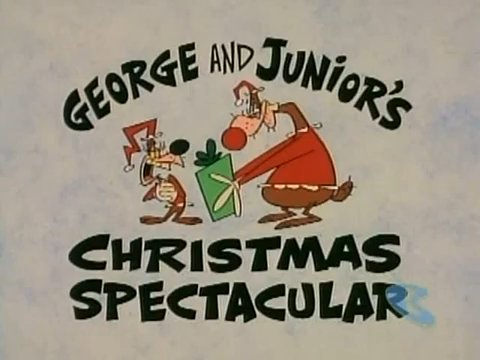 Welcome to the inaugural post in this year’s edition of The Christmas Spot! We’re giving you a write-up each day in December as we march towards Christmas that will hopefully help give you a sense of that wonderful Christmas feeling. This year’s countdown is starting things off with a mostly forgotten short from 1995’s What A Cartoon Show! which aired on Cartoon Network and was basically a proving ground for new animation. Viewers would watch a block of new shorts and could phone in at the end of the episode to vote on their favorite. The most popular shorts would go on to become full-fledged shows in their own right. This was the birth place for many of Cartoon Network’s mid to late 90s original programming including Dexter’s Laboratory, Courage the Cowardly Dog, Johnny Bravo, The Powerpuff Girls, and others. 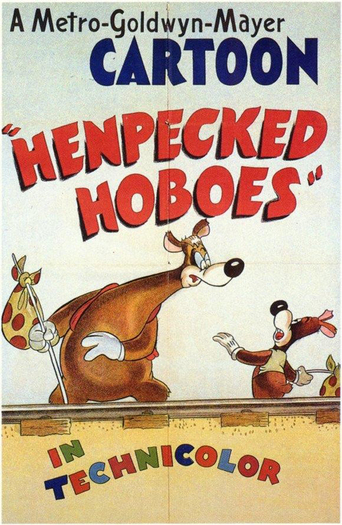 G&J as they appeared in 1946 for their debut short.

Patrick A. Ventura directed six of these shorts and had the distinction of being one of those directors whose works never went to become a series. And as we’ll see with this post, it was mostly with good reason. Ventura has credits all throughout the 80s and 90s as a character designer, writer, director, and so on for lots of popular properties and some not so popular ones. For a pair of shorts he did for Cartoon Network he dug through the archives and resurrected two Tex Avery characters the public had largely ignored, the bear duo of George and Junior.

George and Junior are two bears that probably felt pretty familiar when they first showed up in 1946. George is the short and bossy character who fancies himself the brains of the duo, and he is, but only because the other half of the duo is so incompetent. Junior is a large, rotund, man-bear-child with very limited intelligence. He often begins every sentence with an “Uhhh” or a “Duhhh” before asking George what he should do. Avery was apparently fond with such pairings as you can find basically the same thing in other shorts where the characters may be cats or dogs. They also had the bit of when Junior would mess up George would command him to bend over so he could kick him in the ass as punishment.

Ventura resurrected the characters for two shorts in 1995, “Look Out Below” and “George and Junior’s Christmas Spectacular,” and the latter is naturally what this post is most concerned with. The duo are largely the same as they were in the 40s, only with a new look that Ventura used on basically all of his shorts from this era such as Yuckie Duck and Sledgehammer O’Possum. This style made the characters look a lot uglier and the animation was often minimal. The characters are usually stationary except for over-exaggerated mouth flaps and flailing noodle arms. 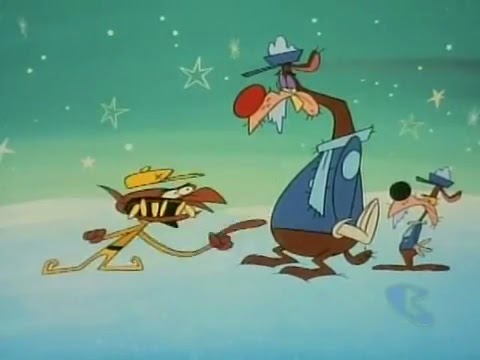 Characters typically get even uglier when speaking as is the case for Steve in this shot.

The short opens with George and Junior delivering mail to Santa’s Workshop in The North Pole. Just as they arrive though Santa departs. Steve the head elf (voiced by T.K. Carter), his status as such displayed via onscreen text, admonishes the duo for arriving so late with the last letter for Santa before telling them they’ll have to deliver it themselves so that some poor sap’s Christmas isn’t ruined. George (John Rubinow) tells him off but the other elves show up to grab the pair and they’re placed in Santa outfits and dropped into a ragged looking sleigh that’s apparently the rusted out frame of an old car. They get the back-up reindeer as well, which is headed by Randalf blue-nosed mule. 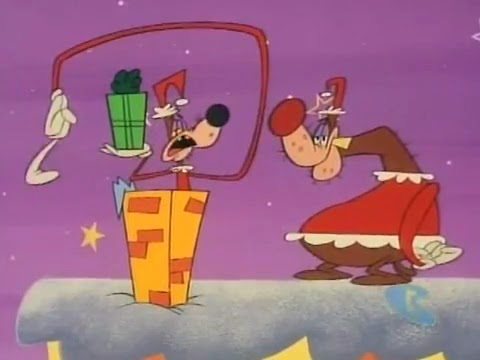 The deer/mule team leads the duo to the only house on their list, and promptly dumps them off the roof because they’re positioned in single file and can’t physically fit everything on top of the house. They dust themselves off and proceed inside, where we get our first “bend over, Junior” after Junior (Tony Pope) crushes George after following him down the chimney. George kicks him so hard the fur flys off of his ass and the commotion awakens Greta. Greta is an ugly little dog who was enjoying a nice snooze beside her dish filled with chicken and booze. A yellowish liquid surrounds her bed which may be drool or it may be urine – this cartoon is pretty gross in style so either is plausible. Greta assumes the two are bandits and gives chase. Repeating backgrounds are the name of the game with the chase and the production values are not looking too high. George and Junior find themselves dumped outside after Greta uses a wreath to lasso them and toss them through a window. 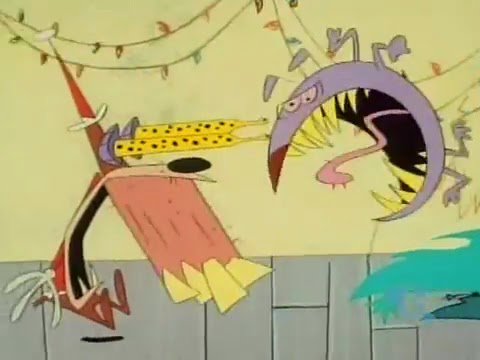 They love the eye bug-out gag almost as much as the noodle arms.

George, apparently really determined to deliver this gift, gets the bright idea to tunnel into the house. The sequence is actually done without dialogue opting only for visuals as the two dig their way into the house only to emerge in the toilet where Greta is in the midst of dropping a deuce. She flushes them, and presumably goes back to her dirty, sinful business. George them decides to have Junior just try and see if the door is unlocked, it wasn’t, but Junior’s freakish strength makes it moot when he pulls the door off its hinges. The two sneak in and George decides he’s going to creep over to the tree and leave the present. Before he goes he hands Junior an oversized candy cane and tells him to bop the dog if it chases him out. Greta naturally chases him, and Junior also naturally bashes George instead – repeatedly. This leads to the second bend over gag and this time George kicks Junior’s ass write off of his body which lands on George and crushes him. 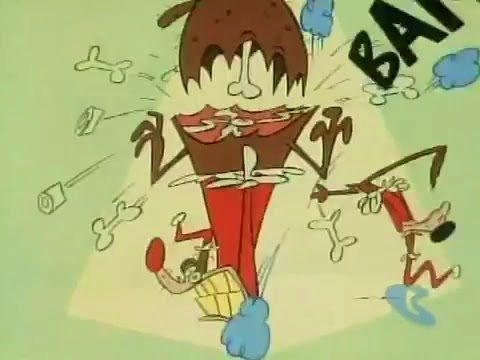 Greta resumes the chase, and when George and Junior scream their heads resemble real bears in what may be the best visual gag of the episode (though the previous slab of ass was kind of funny too). They run up the Christmas tree, so the dog chops it down. When George and Junior land in a Jack-in-the-box Greta need only turn the crank to send them flying out of the house once more. Fed up with everything, George instructs Junior to saw a hole in the roof and they’ll just dump the gift, but Junior cuts a hole around the two and they both fall in on top of Greta. Greta then sees the gift, which is for her – a shiny new fire hydrant to defecate on! She’s overjoyed and immediately heads into the bathroom with it and even remembers to grab a book. Santa arrives (also voiced by T.K. Carter and sounding like a stoned jazz man) and thanks them somewhat awkwardly by giving them a gift before he floats back up the chimney. They open the present to find an adorable little white cat, that of course once acknowledged goes nuts and scratches the hell out of them thus bringing this cartoon to a much needed conclusion. 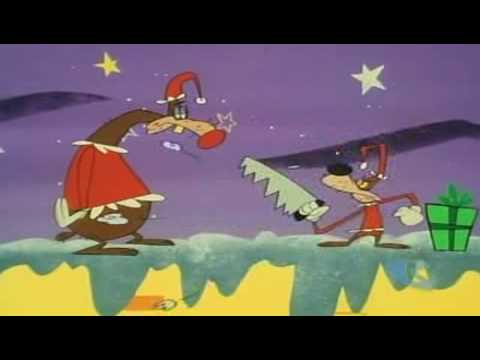 George’s last resort. By this point we all know giving Junior a saw is a terrible idea.

When this short first aired in 1995 I liked it. I thought it was gross, stupid, and funny and I probably hoped that George and Junior would get their own show. Now when I watch it I see it as a lazy, unfunny, short that tries to invoke memories of classic Tex Avery but without any nuance, charm, or purpose. The audio contains mostly public domain Christmas music with little dialogue, which is fine and expected. The sound effects though make frequent use of squishy, fart noises that I may have found funny when I was 11, but they do nothing for me now. A random fart noise is not a joke. Visually, the characters are all ugly which is fine since they’re also not really supposed to be likable. Even Santa Claus comes across as having a “Who cares?” attitude with his brief cameo. What’s less acceptable is just how little animation is present. Maybe Cartoon Network wouldn’t give Ventura much money to make this thing, but it’s also present in his other shorts. Characters just don’t move much, and when they do, there’s almost no transition animation making all of the characters very jumpy. Instead of having them actually move to do something, it just takes the lazy route of having their arms stretch to complete tasks which is neither funny nor interesting to look at. 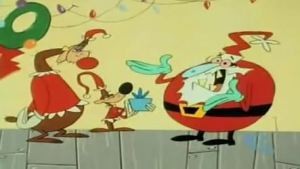 Santa does make a brief cameo at the end to thank the boys.

Christmas-wise, this short at least does pass the test of having recognizable Christmas decor. George and Junior are both dressed as Santa and there’s a Christmas tree, wreath, and snow man, plus all of the different Christmas tunes. It’s not lazily adopting another Christmas story as parody, though the “Character fills in for Santa” routine has been done a lot as well, even by Hannah Barbera. I also do appreciate the attempt to revive a forgotten cartoon duo for another chance at stardom, even if it’s not done particularly well by this or by the other ’95 short. “George and Junior’s Christmas Spectacular” is neither spectacular nor is it likely to put you in the Christmas spirit, but it is a cartoon centered around the holiday so it’s at least deserving of coverage on a small WordPress.com blog. Now lets never speak of it again.

This entry was posted on Friday, December 1st, 2017 at 1:06 am and tagged with 90s christmas specials, cartoon network, christmas cartoon special, george and junior, mgm, patrick ventura, tex avery, what a cartoon and posted in christmas, Television. You can follow any responses to this entry through the RSS 2.0 feed.
« Batman: The Animated Series – “I’ve Got Batman In My Basement”
Dec. 2 – The Tick Loves Santa! »