Batman: The Animated Series – “I’ve Got Batman In My Basement”

Happy Black Friday, we’ve got kind of a silly one today. After three some-what weighty episodes we’re treated to something a bit on the lighter side. “I’ve Got Batman In My Basement” is unapologetically written to appeal to kids. Imagine if you were the one in Sherman Grant’s shoes and you had to protect Batman from the villainous Penguin?

Making his series debut is none other than The Penguin (Paul Williams), who’s arguably Batman’s most famous foe at this point in time following The Joker. He was featured prominently in the 1960’s Batman television show (played by the late, great, Burgess Meredith) and had just recently been in Batman Returns. His animated series look is strongly influenced by his appearance in the Tim Burton film as he’s a bulbous character with malformed hands and long black hair. He’s not nearly as grotesque looking as Danny DeVito’s version of the character, nor does he dwell in a sewer. Instead he’s a rather refined sort of villain. Well-spoken, he also has a taste for expensive avian themed baubles and when the episode begins we find him trying to steal a Faberge egg. His henchman make off with the item and lead Batman to an old factory of some kind where they meet up with their boss. 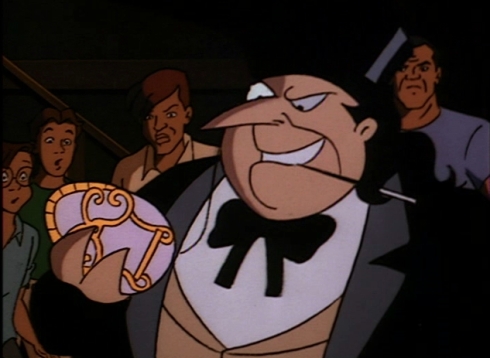 You’ve got to hand it to The Penguin, the man knows what he wants.

Unbeknownst to them all, an aspiring detective named Sherman (Matthew Brooks) and his friend Roberta (Denise Marco) noticed a very strange bird flying over their Gotham dwelling. Sherman tracks the bird, despite some neighborhood kids telling him he’s crazy for thinking it’s a vulture, and Roberta tags along. The bird leads them right to the Batman/Penguin confrontation and they get a bird’s eye view (no pun intended) of the encounter from a catwalk. Sherman recognizes The Penguin right away, so we know he’s an established villain in this universe and, much like The Joker, has likely tangled with Batman numerous times before the events of this show. They naturally slip up and everyone is alerted to their presence. Batman tries to help the kids to safety, but gets hit with some poison gas from The Penguin’s umbrella which does a job on him. He stumbles to the Batmobile, and Sherman and Roberta give chase to try and help the caped crusader. Despite being too young to have ever driven a car, the pair manage to fire-up the Batmobile and race to Sherman’s house where they drag the semi-conscious Batman to the basement to sleep off the effects of the gas.

Every kid’s dream, minus being pursued by The Penguin. Though there are worse villains to be chased by, I suppose.

The Penguin’s vulture soon finds them (it’s rather hard to hide the Batmobile, after all) and eventually The Penguin and his two henchmen (one voiced by the incomparable Rob Paulsen) are at the front door. Sherman, along with Roberta and the two neighborhood kids Frank (Richard Gilliland) and Nick (Adam Carl) do their best to keep The Penguin away from Batman. Sherman is able to figure out that Batman needs some anti-toxin capsules he keeps in the Batmobile, and eventually he’s able to snap out of it and come to their aid, though not before Sherman’s house is a wreck. In an amusing scene, we see his mother’s (Lindsay Crouse) reaction to what happened only for Batman to emerge from the basement which apparently gets her a little flustered. We don’t know if Batman made everything right, but after his brush with greatness Sherman is scene even more determined to become a great detective. 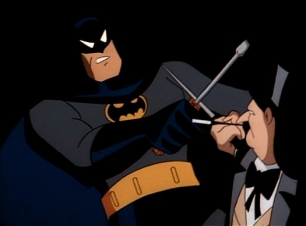 This episode is mostly harmless fun, but this scene where Batman and Penguin “sword fight” is pretty stupid.

“I’ve Got Batman in My Basement” is just a fun episode of the series. It’s a bit unusual for The Penguin to be introduced in such a comedic fashion, but maybe they wanted to distance him from the scarier take found in Batman Returns. I do like this version of the character, which strikes a nice balance between his comic book persona and that film’s visual style. In The New Batman Adventures he’ll be redesigned to basically resemble the classic version of the character, which also didn’t really bother me. I have no real complaints about this one, other than maybe they could have found a more prominent role for Rob Paulsen, this is just a good episode if you’re not looking for something as serious as many of the other episodes in this series. The script is kind of dumb, and I know the episode has its share of detractors (Bruce Timm included), but I find it hard to be offended by this one. It’s light without betraying the show’s overall tone and most shows need an episode like this every now and then. There are plenty of episodes a lot worse than this one.

Up next, is perhaps the greatest episode ever for a super hero cartoon:  “Heart of Ice.” Unfortunately, you will have to wait a little while for my thoughts on that one as this blog is going all out for Christmas starting on December 1st. The Christmas Spot will be bringing you Christmas cheer advent calendar style through Christmas Day, then return to its regularly scheduled programming. This means the next episode recap for Batman: The Animated Series won’t be arriving until December 29th. Hopefully, the Christmas stuff is enough to tide you over until then. So please return then for more Batman goodness, same Bat-time, same Bat-blog.

This entry was posted on Friday, November 24th, 2017 at 1:14 am and tagged with batman, batman returns, paul williams, rob paulsen, superhero cartoons, the penguin and posted in batman the animated series, Comics, Television. You can follow any responses to this entry through the RSS 2.0 feed.
« Teddy Ruxpin 2017 Toy Review
Dec. 1 – George & Junior’s Christmas Spectacular »

One response to “Batman: The Animated Series – “I’ve Got Batman In My Basement””