A popular “gotcha” question from when I was a kid concerning comic books and the X-Men was, “What’s Wolverine’s mutant power?” The desired response was a reference to his claws, at which point one could interject with a “Nuh-uh! It’s his mutant healing factor!” Of course, later in the 90’s it would be revealed that his claws actually were a part of his mutation, thus putting an end to that one, but it was always kind of a stupid piece of trivia anyway. Wolverine’s defining trait are his claws, the healing stuff was just a way to excuse the beating he took in the pages of Incredible Hulk and X-Men. If he didn’t have those unbreakable claws, he probably never would have become the most popular member of the X-Men.

And yet, Wolverine’s claws were always a bit of an obstacle for comic writers and artists, and eventually animators and film makers as well. You have this violent, bad ass character, equipped with blades that can cut through almost anything, but he really can’t use them because of the obvious gore factor that would involve. Instead, Wolverine would often use the claws for show, deflect some attacks, cling to walls, cut through a fence, and everyone’s favorite – hack up some robots. That’s why it’s particularly liberating to see Wolverine go all out in the opening moments of Logan.

To a newcomer, or even someone who has just fancied themselves a casual fan, the violence and gore present in Logan will seem over the top, perhaps juvenile. The R rating the movie garnered may be viewed in a cynical fashion to appease young males who want f-bombs and blood out of their movies. For those who have been with this character since their childhood though, it’s a stark reveal of just who Wolverine is. This is the Wolverine we hear about from other characters, spoken of in hushed tones and feared by his enemies. This is a superhero who’s primary offense, and defense, is to just start hacking. And since this is applied to an older, very cynical, Wolverine we get a character who doesn’t operate in half measures – if you get in his way and threaten him or those who cares about, Wolverine won’t hesitate to remove your face from your skull.

If you’ve always wanted to see Wolverine do this, then Logan will make you very happy.

Logan is a film set some 15 years or so in the future. It’s not a dystopian world or a wasteland. There are no flying cars or laser rifles, the setting is just an excuse to take a look at an aging, dying, Wolverine. When the film opens we see Wolverine has taken on a very mundane job as a limo driver. He walks with a limp, is an apparent alcoholic, and his wounds don’t close as quickly as they used to. When he’s not working, he’s scoring drugs and hopping the Mexican border where his perhaps only friends are hiding out:  Caliban (Stephen Merchant) and Charles Xavier (Patrick Stewart). The drugs Wolverine purchases are for Xavier, who’s past the ninety-year mark and struggling to keep his wits about him. When the world’s most dangerous telepath can’t control his old brain bad stuff can happen. Wolverine is apparently saving up some cash to buy a houseboat where he and Xavier can live out the rest of their days without fear of harming anyone, or anyone bothering them (in the case of Wolverine).

Wolverine’s day to day life is disrupted when a borderline hysterical woman (played by Elizabeth Rodriguez) comes seeking his aid. Offering a substantial amount of money, she wishes for Wolverine to smuggle her and her daughter into Canada. Wolverine wants nothing to do with her, apparently not wanting any trouble. Soon a young man barges into his limo looking for info on the woman. He is Donald Pierce (Boyd Holbrook), and we know from his demeanor and bad-ass cybernetic hand that he is certainly a bad dude and probably what the young woman is running from. Upon hearing this, Xavier naturally wants to help the woman as he senses a mutant presence, Caliban smells it as well (his mutant power). This is a big deal as there hasn’t been a mutant born in this world in over twenty years. Wolverine is sort of conned into helping the woman, and things get messy before they get any better.

Since she’s featured so heavily in the promotion, and the film makes little attempt to create any mystery about it, I might as well continue along and talk about Laura (Dafne Keen), the young mutant Wolverine and Co. end up taking in. Laura, known as X-23 in the comics, is a young girl with a very familiar set of powers and abilities, and also temperament. She is referred to by other characters as Wolverine’s daughter, but it might be more accurate to call her his clone. She’s on the run in search of a place called Eden and is running from Pierce and the people responsible for her existence. After the lengthy setup, the film turns into a road movie with Wolverine, Laura, and Xavier. 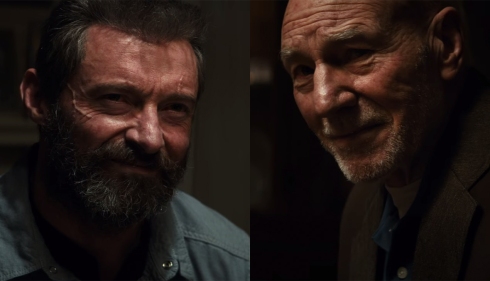 Jackman and Stewart are just beautiful in their portrayals of Logan and Xavier.

Logan is not a feel good movie, and it doesn’t offer much mystery. I found myself anticipating almost every beat the film hits, but I also didn’t care. The world of Logan is harsh and unfriendly, but there are small moments to break up the grim that either provide humor or just a small slice of life. Xavier and Laura make for a fun pair and easily form a warm relationship, even if Laura is essentially mute. Perhaps to the surprise of some, Xavier is the character most often relied upon for comic relief. He and Wolverine clash well, but underneath the surface conflict it’s obvious the two love and respect each other. Wolverine is a surrogate son of sorts to this version of Xavier, and waits on him like a doting son, though he seems to take some enjoyment in complaining about it every step of the way. The relationship feels very authentic, which is a word that kept coming to me as I took in this picture. Patrick Stewart comes across as especially authentic as Xavier. There’s a scene where the trio sits down to dinner with some strangers and Stewart plays Xavier in a way that’s reminiscent of every dinner I’ve ever had with an elderly person I had only just met. He’s delighted to speak with someone other than his irritable traveling companion, but his performance never teeters on parody.

Hugh Jackman is a captivating Wolverine in this film. I suppose that comes as no surprise since he’s been playing this character for almost twenty years now (the same can be said of Stewart). Jackman worked with director/writer James Mangold on the story, loosely adapted from the Old Man Logan story from the comics. It’s clear from interviews with Jackman that this was an important film for him and an important story for him to have a part in telling as Wolverine, for it’s to be his last turn as the character. The Wolverine of this film is best described as the exact assumption most would have of an old man Wolverine. All of his lesser traits -his irritability, cynicism, vices and so on have only been strengthened by father time. He’s still a good guy inside, but his pessimism makes him more of an introvert than he’s ever been. The film doesn’t dwell on the past, but it makes it obvious that all of the X-Men are dead. This is a Wolverine who has lost everything. He doesn’t want to start over, he’d rather just die. He’s pulled through this movie by other characters as well as his inner sense of duty, but it’s a struggle. The film tells this story through action and not so much dialogue. In doing so, Mangold is able to avoid a lot of the tropes that plague other films attempting to tell a similar story.

I wonder where she gets it from…

Laura proves to be a compelling character in her own right. Portrayed by newcomer Dafne Keen, Laura is a wide-eyed girl experiencing the world for the first time. Everything is interesting and new to her, and Keen is forced to tell us what Laura is thinking through her actions alone while also being restricted from changing her usual stoic facial expression. She’s a fun character to watch when the film slows down, but also a sad character during the action sequences when we are forced to watch a young girl brutally eviscerate other people with cold precision. She’s in a way been denied humanity, while also being denied a childhood. Again, Mangold does a great job of just putting this out there in the film without editorializing it. We don’t need a character to tell us now depressing her upbringing was. The film slowly gives us more and more of the Laura character and it’s one of the few aspects that feels rewarding. I would guess most people will leave the theater wanting to see more of this character in the future.

All of this is to say the movie isn’t perfect. Like most superhero pictures, it’s probably longer than it needs to be. While there are no obvious scenes that could have been axed, the film does move slowly and if an editor had been ordered to keep the runtime under two hours they probably could have found a way without much compromise. The film is also so centered on Wolverine and Laura that the antagonists feel like after-thoughts at times. And as I mentioned, it is very predictable and there is a sequence in the middle of the movie that bothered me as a result because the characters should have been able to see the danger up ahead.

The flaws within Logan are minor and do little to bring down what some are calling the best superhero movie yet. I’m not sure that’s entirely accurate, as Logan could function as any kind of movie if you took away the super powers. The film isn’t centered on a conflict of good vs evil with the fate of the world in the balance. It’s a character driven film, and for people who have considered themselves fans of the Wolverine character, this is probably the film you’ve been waiting for. It’s a film for those who appreciate the essence of what makes Wolverine special, and it’s able to present the character in an authentic way without devolving into a ton of fan service. More importantly, this is also clearly a worthy story for Jackman to go out on. This is his finest performance not just as Wolverine, but of any film I’ve seen him in, and I assume that was the personal goal of Jackman going into it. I was totally fine with this being Jackman’s last time playing Wolverine, but once the credits started rolling I must admit I was starting to wish for more, and as they say in show business, always leave them wanting more.