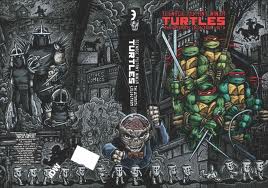 I’ve been rather slow lately when it comes to posts, and especially so with getting to this one in particular.  I can’t even remember when volume 3 of the Teenage Mutant Ninja Turtles Ultimate Collection arrived at my front door but I do know it was several months ago.  I’ve put off posting on it in part because I made a couple of other Turtles related posts in the interim and just plain laziness.

I suppose it would be fair to say that had I been blown away by what I saw and read in volume 3 that I would have posted sooner.  Volume 3 is a bit of a mixed bag and not as strong as the two preceding it.  The collection contains issues 12, 14, 15, 17, and 19-21.  The first four are one-shot stories that Eastman and Laird were involved with to varying degrees while the last three cover the “Return to New York” plot jointly worked on by the two.  At this point, the TMNT franchise was much bigger elsewhere and the original comics were starting to feel like an afterthought.  Playmates and the networks that aired the cartoon probably weren’t crazy about the idea of kids (and parents) stumbling onto these more violent turtles while the creators were suffering from turtle-induced burnout.  Simply put, the money wasn’t in the comics and it was in part out of obligation that Eastman and Laird continued with them.  Their working relationship had also soured, meaning they worked on few issues together and instead relied on the talents of guys like Jim Lawson and Steve Lavigne.  If you’re wondering why there appears to be some missing issues in this collection, it’s because Eastman and Laird didn’t work on them at all.  This Ultimate Collection represents the Eastman/Laird era and is set to conclude with volume 5, which will presumably arrive in the fall (volume 4 is currently scheduled to start shipping at the end of March).

The one-shots in volume 2 really made the set.  The individual micro series issues that focused on a sole turtle were among my favorites and succeeded in distinguishing each turtle from one-another.  In this volume the opposite seems to be the case as the one shots are lacking in focus and creativity.  The first one, “Survivalists,” is a Laird story and places our heroes out in the country with Master Splinter where they encounter an outlaw group fixing to steal a nuclear bomb.  It’s rather absurd, even for a TMNT story, but does feature Splinter in some action scenes which is always nice to see.  What follows is “The Unmentionables,” an Eastman story that puts Casey Jones in detective mode as he looks to solve the mystery of a stolen landmark.  The setting takes place in a small town and it’s genuinely interesting to read the notes following the story from Eastman and Laird about the real-life connections of the fictional town to the real town (Northampton, MA), but aside from that I found the story to be poorly paced and dull. 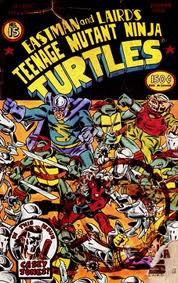 The original cover for “Dome Doom” was made to look like an old, beat-up comic.

Things start to get a bit more interesting with “Dome Doom,” a story inspired by silver age comics.  It’s the type of story that a lot of modern comics have utilized where the current heroes are paired up with the heroes of a prior generation.  In this one, the TMNT help the retired Justice Force take down an old foe.  The plot is ludicrously corny, but I think that was intentional, and also seems to be a response to claims that Eastman and Laird are now sell-outs for licensing the TMNT (the retired Justice Force all sold their likenesses for millions in the comic’s plot).  This is some of Laird’s best artwork and I enjoyed the design of the little dome robots.  The story is kind of a throw-away, but I had some fun with the issue.  “Distractions” seems to take place in the far east sometime in the past with a TMNT-like protagonist helping out a damsel in distress that looks a lot like April.  It contains some samurai story cliches and all seems kind of corny, at which point the story ends and we find out it’s source is Mikey as he’s trying to write his own comic.  The artwork (by Eric Talbot) saves the day here with some really cool shading and a lot of violence.  I like this feudal looking turtle and I’m surprised he wasn’t made into an action figure (or maybe he was and I just forgot).  I could have done without the dinosaur though.

Most people who pick this volume up will do so for the “Return to New York” arc which features the return of a very popular villain.  “Return to New York” captures the spirit of the first issue of TMNT with a slightly more advanced approach.  There’s actual character development this time around and we finally get some good Leo vs Raph moments, including an all out brawl in issue 19.  The fight is pretty vicious considering it pits brother vs brother and ends up being really satisfying.  Unfortunately, the black and white nature of the comic makes it really hard to distinguish between which one is Raph and which one is Leo throughout much of the fight.  The first issue ends up dealing with the notion of teamwork and captures a lot of the same messages contained in the first two Turtle films.  It’s a bit of a re-tread, but this is also the type of story the TMNT are good at telling. 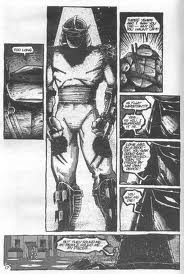 The rest of the story revolves around the return of the Foot clan, and of course, the Shredder.  Shredder was famously slain in the first issue by Leonardo, but he’s back from the dead through odd means.  I didn’t quite get it, he’s composed by worms or something weird, but didn’t really care.  It’s basically all action as the Turtles storm the Foot’s base (with an unlikely ally too) and the whole thing builds towards a Leonardo vs Shredder re-match.  The fight is a vicious one that goes back and forth, but I don’t think it’s spoiling much to say that the heroes prevail.  The battle serves as a bit of redemption for Leo and Raph too, as Raph was able to pull out a victory in his one-on-one battle with Leo but was unable to take down the Shredder by himself.  Laird and Eastman actually take the time to show that Raph’s headstrong mentality can work for him in certain settings, but not all.

As was the case with the previous volumes, this one contains new artwork by Kevin Eastman on the cover.  It’s a mash-up of the stories contained within.  The notes from both of the creators are quite extensive and genuinely fun to read.  The interior art is presented in its original black and white and is enlarged to fit this over-sized format.  The quality is top-notch, and this is still a nice piece for any TMNT collector out there.

This entry was posted on Saturday, January 5th, 2013 at 2:47 pm and tagged with kevin eastman, mirage comics, peter laird, return to new york, shredder, TMNT and posted in Comics. You can follow any responses to this entry through the RSS 2.0 feed.
« Mickey Mouse: In Living Color
Greatest Games: Xenogears »