Season one of the animated series X-Men was a great success for both Marvel and Fox Kids.  It was the highest rated program on Saturday Morning in its target demographic and thus was renewed for a second season.  Its reign as a rating’s top dog would be short-lived, thanks to a new kid’s show called Power Rangers, but its new-found status of second place had nothing to do with a dip in quality.  Far from it, actually, as season 2 would prove to be every bit as good as season 1, if not better.

Season 1 had a narrative structure that involved linking all of the episodes together, rather than having them all be stand-alone in nature.  This may have made it a little challenging for viewers to jump right in mid-season, but was rewarding for those who latched on from episode one.  Season 2 kept this format, but augmented it slightly.  Season 1 chose to introduce villains every few episodes, where as season 2 opts to focus more on the X-Men individually.  Most of the characters get their own episode that details their back story.  In Rogue’s episode we learn how she joined the X-Men, with Gambit we learn about his involvement with the thieves’ guild, and so on.  Cyclops and Jean are the only two who do not get this treatment.  Jean ends up being a big player in subsequent seasons while Cyclops will have a few episodes dedicated to him down the road.

The one narrative piece linking all of the episodes together involves Xavier and Magneto’s trials in the Savage Land, a place time forgot located in Antarctica.  They would receive a few minutes either at the end or beginning of an episode as they tangle with dinosaurs and try to avoid the Savage Land’s mutates, all while trying to uncover who the mysterious Leader is.  The villain Mr. Sinister would also play a large role in season 2 as he shows up in several episodes.  Sinister was still a some-what new villain for the comics and his inclusion would really benefit the character.  The other major villain would be the Friends of Humanity.  With Senator Kelly now president, the mutants needed a new human villain.  This organization would prove to be the KKK of mutant hating.  Lead by the merciless Graydon Creed, the FoH made life miserable for the X-Men in season 2 and were a big part of several episodes.  Their inclusion helped keep the civil rights aspect of the show in the forefront. 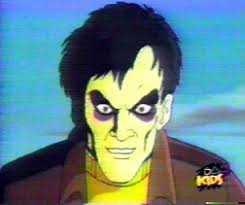 For weeks before season 2 began airing, Fox teased fans with commercials featuring the big return of Morph, and this two-part story did not disappoint.  Morph was back and revealed right away to the viewing audience, but not to the X-Men.  The once cheerful mutant was now bitter.  It was soon revealed that Morph had developed two personalities; the happy-go-lucky persona we saw in “Night of the Sentinels” and a new, evil one.  This new one was depicted as having yellowish skin and black circles around his eyes.  He looked a little more gaunt as well, making him a sort-of zombie Morph.  He’s angry with the X-Men for leaving him to die at the Mutant Registration Compound, and he’s going to use his shape-shifting powers to get back at each member of the X-Men.  He first tricks Cyclops and Jean into thinking they’ve been married by a legitimate priest before sending them off on a honeymoon.  He sends Xavier to Antarctica by posing as a dying Magneto.  Jubilee is sent off to the Friends of Humanity headquarters (“That’s for thinking you could replace me!”), Gambit is duped into kissing Rogue (and being knocked unconscious by her energy draining powers), Storm ends up getting shot by police, and Rogue is pissed at Beast (they got off easy) for thinking he was going to back Storm up.

All the while the Friends of Humanity try to make life bad for mutants.  Creed hires someone to pose as a mutant and wreck up the place where President Kelly is giving a speech.  They’re able to provoke Wolverine, Gambit, and Beast into a fight and capture some unflattering images of the recently pardoned Beast for inclusion on the evening news.  This results in Wolverine storming off to take care of them on his own, which leads him to the FoH headquarters where Jubilee is being held and the two bust out. 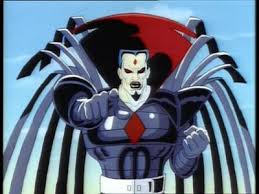 Morph, of course, is eventually outed as the perpetrator of all of this mischief when Wolverine’s nose picks up his scent while he’s masquerading as Xavier.  He escapes the mansion and the X-Men follow him to a secluded island, a base for Mr. Sinister, and we see just what happened the night Morph died.  Cyclops and Jean are being held prisoner, and the X-Men show up to tangle with Sinister’s Nasty Boys.  We get some good action here, as the Nasty Boys possess some unique powers (and some not unique) that give the X-Men some trouble.  Of course, Morph comes to his senses and ends up saving the day by (inadvertently) freeing Cyclops from his restraints, who takes care of the rest.

The episode ends with the bad guys getting away and Morph taking off as well, much to Wolverine’s disappointment.  The episode does a good job of introducing Sinister as a puppet master who is both formidable in combat and behind the scenes.  The inclusion of Morph is pulled off in a respectable way as well.  Most of the time I despise it when writers bring characters back from the dead, but this one works, especially when one considers it was always kind of odd that a Sentinel blast could kill an X-Man.  The episode also concludes with Xavier and Magneto’s reunion and the two, thinking each had been invited by the other, are soon caught in an avalanche.  Xavier’s premonition of “I sense something sinister,” kind of ruins the whole mystery of who’s behind the Savage Land mutates that the writers try to perpetuate throughout the season, but it’s easily forgiven.  As a kid, I was disappointed Morph did not rejoin the X-Men at the episode’s conclusion.  As an adult,  I’m disappointed he was, more or less, freed from Sinister’s control as evil Morph was a very entertaining villain throughout the two episodes.

The Shadow King, quite possibly the worse X-Men villain to appear in the animated series.

The first character to get their own special episode is Storm.  We learn that Storm has a foster son in Africa, and a disturbance in the astral plane discovered by Cerebro sends Storm and Rogue off to investigate.  The episode also introduces the Savage Land, a tropical oasis in Antarctica where many prehistoric creatures still roam.  Magneto and Xavier find themselves trapped here and strangely their mutant powers have vanished.  Along with that, Xavier is also able to walk again.  Magneto informs Xavier he is familiar with this land, but it never had such properties before.  They tangle with some dinosaurs and basically set the stage for what will end up being a season’s long adventure.

Wolverine has a side-story where he’s chasing after Morph through the jungles of South America.  He finds Morph, who has used his shape-shifting powers to assimilate himself with the locals, and the two tangle in a mine shaft.  Morph delights the audience with a couple of cameo transformations including Maverick and Deadpool as he attempts to harm Wolverine psychologically.  Eventually, Morph backs off and slips into his “good Morph” persona pleading with Wolverine to let him get through this by himself.  Wolverine, begrudgingly, acquiesces  to his friend’s wishes.

Sadly, the minor side story is the most compelling, as Storm and Rogue’s exploits in Africa are not.  The Shadow King is the one behind the rip in the astral plane, and he has targeted Storm’s surrogate son Mjnari in order to lure her back to Africa.  It is revealed that Storm once served the Shadow King in her youth as a pick pocket.  Xavier sealed the Shadow King away in the astral plane, a realm the most powerful psychics are able to access, destroying his physical body.  He possesses Mjnari, and then eventually Storm as she offers herself to him in order to spare her son.  Rogue is kind of just along for the ride as her brawn is not able to touch the Shadow King’s corporeal form.  Mjanri ends up finding a way to lure the Shadow King back into the astral plane, and the portal between the two worlds closes, sealing him away once more.  The whole thing is kind of silly and predictable, the end result being season 2’s worst episode.  At least they got it out of the way early. 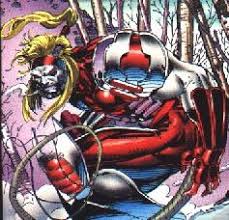 Season 2’s fourth episode is one of the few not to feature significant back-story or character details about one of the X-Men, and that’s because it chooses to introduce a new villain:  Omega Red.  Omega Red was a very new villain to the comics and one that caught on with audiences pretty quickly, mostly because of his look and because he was a new villain for Wolverine.  Red was born from the Soviet equivalent of the Weapon X project.  His back-story isn’t explained in great detail, just that he was the Soviet’s ultimate weapon and Wolverine lead a team that helped, in his words, put Omega Red back on ice.  Armed with retractable carbonadium coils (an indestructible metal similar to adamantium) that drain the life from his victims, Red is unfrozen by a corrupt Soviet regime looking to take back the country.

Naturally, this presents an opportunity to bring Colossus back into the fold.  Colossus helps Jubilee deal with some Friends of Humanity goons who are harassing a convenience store owner.  He tells Jubilee he has come seeking the X-Men’s help in dealing with Omega Red.  The X-Men aren’t home, so Jubilee leaves a note and the two head off to Russia to combat Omega Red.  Wolverine arrives home soon after from his exploits in South America, and promptly crushes the note while growling “Omega Red” and bad ass music plays as he stalks off to the hangar.

Back in Russia, Colossus and Omega Red face-off, with Wolverine soon joining the party.  We learn about their back-story, while Omega Red handles the threat effortlessly.  The battle is broken up, and the rest of the X-Men soon arrive.  Together, they battle Red and Storm’s mastery of the cold freezes Omega Red once more.  The character Dark Star, once an ally of the old regime, assists in taking down Red and she also apprehends those responsible for bringing him back.  Colossus once again is offered a place with the team, but he declines saying his place is with his family.  Unfortunately, this episode is the last to feature the brawny metal mutant.  A good almost one-shot for Omega Red (I say almost because he does get a return episode) and a way to keep the series topical with the comic books.

This entry was posted on Saturday, May 14th, 2011 at 11:02 am and posted in Comics, Television. You can follow any responses to this entry through the RSS 2.0 feed.
« Kamelot Abandoned
Heavy Rain »