I had been meaning to play the 2010 game Heavy Rain for quite some time, but had yet to get around to it.  Part of me was hesitant about doing so because it had been compared loosely with those old point and click adventure games from the 80’s and those never appealed to me.  As a result, I put it off and never got around to purchasing it until recently when I saw it for 20 bucks at a local store.  Having just finished my first play-through the other night, my initial reaction is that this is one of the most unique experiences I’ve ever had with a video game.

For those unaware, Heavy Rain is probably best described as either an adventure game or a crime noir.  It was released for the Playstation 3 in February of 2010 to very favorable reviews earning an aggregate score of 89.3% on Gamerankings.com.  It does share some things in common with point and click adventures but not as much as I had been lead to believe.  For the most part, the player still controls an on-screen character through mostly conventional means.  The left analog stick changes the direction the character is facing and squeezing the R2 trigger makes the character walk similar to how the old Resident Evil games used to control.  The character can approach objects in the environment and some can be interacted with by pressing a button indicated by an on-screen icon.  Often instead of the button input being the typical “X” or “Square” it’s a direction on the right analog stick. 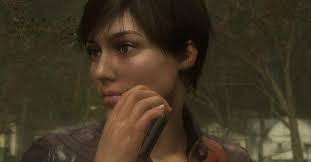 Visually the game is a mixture of average and exceptional. The exceptional part refers to the characters and the life-like way they're able to emote.

After that though the game gets less typical.  At any point in time, squeezing the L2 button will make a bunch of text pop up on the screen with one of the face buttons beside it indicating a thought.  Pressing the associated button will let the player listen in on the character’s internal thoughts.  This is sometimes used to help cue the player on what to do next but most of the time it’s just to add color to the context of the situation and enhance the experience.  Actions will play out on-screen and button commands will pop up that the player has to follow in order to progress, or not.  Often times inaction is also acceptable and even desirable as all responses will advance the story.  These scenes range from simple conversations to intense physical confrontations between characters.  For the conversations, missing a cue can lead to failing to pick up a piece of valuable information, while in a fight missing the cue or hitting the wrong button can lead to failure, including death.

That’s the basic gameplay and most of the scenarios occur in pretty small areas.  There’s very little running around and trying to figure out what to do next, the game just unfolds in scenes.  There are a couple scenarios where you’re asked to drive or shoot a gun but they handle like the other scenes, just with less reaction time.  I went with the hard setting which affects the type of inputs required.  I think the easiest setting mostly limits the commands to simple one button presses.  I was asked to do motions with the right analog stick, half-circle motions and funny “hook” motions.  Sometimes the game asks you to tilt the controller (like when driving) or jerk it in a certain direction quickly.  For the triggers and face buttons, some are simple presses, others require pressing and holding the buttons in a certain sequence or tapping rapidly.  Usually the required input corresponds with what the character is being asked to do on-screen and adds a surprising amount of depth and immersion for the player.  I was expecting the controls for this game to be a necessary evil to move the plot forward but they really add a lot to the experience. 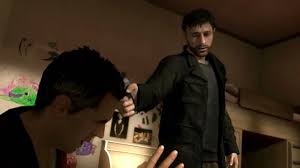 Ethan Mars will be asked to do some very bad things if he ever wants to see his son again.

If the plot wasn’t any good though the controls would probably get old, but thankfully Heavy Rain plays out like a true crime drama.  The main protagonist and first character you’ll control is Ethan Mars.  After losing a son in an unfortunate accident Ethan finds himself in a state of severe depression and estranged from his wife.  When his son Shaun goes missing he finds himself at the end of his rope.  It’s soon learned that his son was abducted by the Origami Killer and Ethan must go through several trials sent to him by the killer in order to get him back.  Meanwhile, the local police have enlisted an FBI agent, Norman Jayden, to help track down the killer.  As Jayden, the player will use sophisticated equipment to play detective and try to find the killer while navigating through a series of red herrings and Jayden’s own substance abuse.  Local private investigator Scott Shelby is also working hard on the case and is the third character the player will control.  Shelby is a former cop working on his own leads to find Shaun.  Madison Paige is the fourth and final character the player gets to control.  She’s a journalist suffering from insomnia who kind of stumbles into Ethan’s life.  She’ll end up working with Ethan to try and find Shaun.  The Origami Killer slowly drowns his victims over a period of time, and depending on the amount of rain that falls, Shaun will die.  This adds a sense of urgency to the plot as the game bounces from scene to scene, character to character. 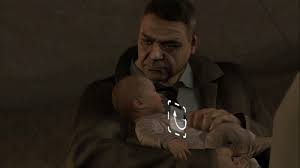 Some of the tasks the player will be asked to do can be described as atypical.

The truly unique part of Heavy Rain is that there is no right way to get to the game’s conclusion, and no game over along the way.  Any or all of the characters could die over the course of the game, including Ethan’s son Shaun, and no two games will be the same.  The trials Ethan goes through are both trials of skill and morals.  Each completed one gets Ethan a clue to Shaun’s location.  Some are brutal and for me conjured memories of the movie Se7en.  The more that are completed the easier it is to find Shaun but some players may find certain ones abhorrent and refuse to complete them.  That’s understandable and know that it’s still possible to save Shaun without completing all of them.  Ethan may end up with enough information to figure it out or one of the other characters will come to Shaun’s rescue.  It’s also possible for all of them to figure it out, which is what occurred in my game.  I suppose that is the most desirable outcome.

I played this game straight-up, meaning no help or re-do’s.  There were a couple of scenarios that didn’t go the way I wanted them to but I resisted the urge to reset and go again.  I think this game is best played as if it were life or death, and in the game of life there are no extra lives.  There were a few moments I thought I really screwed up and was going to get someone killed but I was always able to wiggle out of it.  These moments of high anxiety are where the game shines brightest as I found myself really invested in what happened to the characters.

It’s not a real long game, maybe 8-10 hours each time through, but the pacing is spot-on.  The game started a little slow as the characters were worked into the plot but once it got going I didn’t want to put the controller down.  When I had to though, I found it hard to jump right back in knowing how emotionally taxing the experience was going to be.  This is a game I recommend players beat in 2 to 3 sittings, though if you can do it in one then more power to you.  The game does have a “twist” in the plot that some apparently did not care for.  I was neither shocked nor put off.  For a game that really tries to not be a game, the twist did feel a little cheap as the game did kind of cheat in order to make it happen.  I’d explain more but I don’t want to spoil anything.

Heavy Rain is the only video game I’ve ever played that transcends the genre.  That doesn’t mean it’s my favorite or the greatest game ever, but it does make it one of the most significant.  The argument of whether video games can be art is a fashionable one currently and for those on the affirmative side of that question Heavy Rain is probably the best thing going for them.  I do think it’s a title any serious gamer should play, and if you do choose to pick it up make sure you see it through to the end.

One response to “Heavy Rain”