“I hope they make it dark”

That line is bound to surface anytime a new spin-off of a comic book is announced for television and film.  I don’t know where it started, perhaps following the success of Tim Burton’s Batman, but it’s one line that drives me crazy.

First of all, what does it really mean when fans say they hope an upcoming project is “dark”?  Do they want a visually dull image?  A bleak, depressing atmosphere?  Hardcore violence?  Or all of the above? 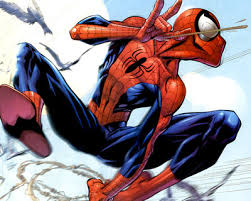 Spider-Man is a teenager who goes through lots of ups and downs, but to call the tone of the book dark is inaccurate.

I think the word has become interchangeable for a lot of people with the word mature.  And in some ways, it makes sense.  Typically, when a comic is translated over to the world of television it is done so as a cartoon and marketed towards children.  When that happens some elements are understandably lost.  Most mainstream comics trend towards an audience a little older than the target demographic of a cartoon series.  That and a cartoon costs a lot more to create than a book and television producers are forced to hit as a broad of an audience as possible.  So while Marvel or DC may think it’s okay to show death in a book catered more towards teenagers, Disney television probably wants to avoid the subject in order to please the parents of six-year olds.

I’ve always found it odd how kid’s shows handle death, which is to say, few ever die.  The idea for this post sprung up as a result of seeing a user comment posted on a story about the upcoming Ultimate Spider-Man cartoon.  The word “dark” and the user hoping the cartoon is that way was beyond stupid, since the comic is pretty light-hearted and colorful (or at least it was when I read it in the mid 2000’s), though it did get me to think about a certain character.  In the comic, the character Gwen Stacy is killed by the villain Carnage (in the Ultimate version, I’m aware it’s traditionally Green Goblin that gets her) off screen, but Peter is shown stumbling upon her corpse.  Carnage kills by sucking out the life force from its victims in the Ultimate-verse, and Gwen’s corpse looks almost mummified when Peter finds it and the artist gives us a full-page shocking view of her grim visage and contorted limbs.  I don’t know what network is looking to air the cartoon, but I suspect this won’t be included.  That is understandable, but what I’m curious about is if the networks will even go as far as to even kill the character? That was sort of a tangent, but to get back to the post’s initial premise, I most often see this particular subject line associated with the Teenage Mutant Ninja Turtles.  Whenever a new television series or film is either announced or speculated upon, there’s always a vocal group of fans wishing the new iteration would be dark like the comic books.  The turtles began as a black and white comic book where most of the characters spoke little and actually used their weapons.  It was a modest success for creators Peter Laird and Kevin Eastman but turtle-mania didn’t kick off until it was adapted for television and a younger audience.  The original TMNT was kind of a spoof comic, one need only read the ridiculous title, so the fact that it became this big hit is rather amazing.  The creators behind it were able to get kids to take it serious, and as a result made boat-loads of cash. 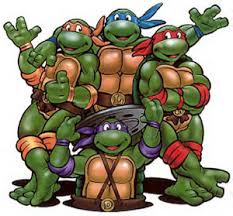 The television version of the turtles from the series that started in 1987.

The TMNT cartoon was noticeably lighter in tone.  Raphael, a mean-spirited bad ass in the comic, was made sarcastic and jokey while Michelangelo was more of a goof ball.  Donatello, smart in the books, was made into some kind of super scientist while Leonardo mostly maintained his persona from the books, though with less overall intensity.  The cartoon would have never worked in black and white, so it was made appropriately bright but the streets and sewers of New York were given a little grime.  The turtles were also given individual colored bandanas and pads instead of all sporting red bandanas with brown pads.  Shredder was chosen as the main antagonist and he was pared with a personified alien brain-like creature named Krang, who was loosely based off a race of aliens from the comic called Utroms.  Shredder was given an army of robotic foot soldiers (so that the turtles could freely hack them up) as well as a pair of mutants of his own, Bebop and Rocksteady, who served as comedic relief.

The show started off as a five-episode mini series adapted from the plot from the books about how reporter April O’Neil (now sporting a yellow jumpsuit and a more fashionable hairstyle) is introduced to the TMNT.  Shredder is shown as a legitimate threat and his origins are revealed as Hamato Yoshi’s rival.  Yoshi would be banished from Japan as a result of Shredder’s, where he would mutate into Splinter (in the books, Splinter was Yoshi’s pet and Yoshi ends up getting murdered by Shredder, the networks understandably didn’t want murder in their cartoon).  The mini series proved a success, and a series was launched but changes were made.  Michelangelo’s nunchaku were deemed too violent (but Leonardo’a katanas apparently were not) so the character was rarely seen with them.  Eventually they would be removed and the character sported the “Turtle Hook” instead.  This weapon was just a grappling hook and was as lame as it sounds.  Shredder was also dumbed-down and made a comedic villain.  He was of little threat and the main theme for the program was four turtles having a good time, kicking butt, and eating pizza. 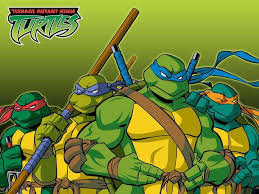 I don’t necessarily find the mass-market turtles more appealing than the grim and gritty originals, but this was the iteration of the turtles that morphed them into media giants as opposed to indie heroes.  Any network or film house looking to do something with the TMNT is not interested in making an R-rated, or even PG-13, product to satisfy a vocal minority.  The best fans can hope for is something more in-line with the first film based off the TMNT, which returned the old personalities of the turtles while keeping the colored masks.  Most of the film took place at night and all of the sci-fi elements of the cartoon were removed.  The following films were more hokey and kid-friendly, but that first one was actually pretty spot-on.  That said, I think most want to appeal to families and hoping for that much may be out of the question.  The last film released, simply titled TMNT, definitely went for the kids though there was some edge kept to the characters.  The movie was mostly undone by a terribly boring plot and slightly off-putting character designs (the turtles looked more like frogs than turtles).

I suppose the statement I am trying to make is that darker isn’t always better.  It’s also terribly overdone when every superhero has to be some sort of fly-by-night bad ass in every film.  Dark is a terrible direction for a character like Spider-Man or Superman, and the term shouldn’t be interchangeable with mature.  Yes, there are a few story-lines within the Spider-Man canon that are darker than others, but the overall mood of the franchise has always been kind of happy.  Spidey wears a colorful costume and cracks jokes while knocking bad guys around.  Sam Raimi turned him into a moody cry-baby for Spider-Man 3 and we all saw how well that worked.

This entry was posted on Sunday, March 20th, 2011 at 11:30 am and posted in Comics, Film, General, Television. You can follow any responses to this entry through the RSS 2.0 feed.
« X-Men: The Last Stand
Mortal Kombat Demo Impressions »