For today’s installment, we’re taking a trip back to Cartoon Network of 1997 and the animated short I Am Weasel – “Happy Baboon Holidays.” I Am Weasel originated as a segment as part of the Cow and Chicken show, which was part of the second wave of Cartoon Cartoons to become a full-fledged show. Like Dexter’s Laboratory, Cartoon Network asked the show’s creator, in this case David Feiss, to pair off the characters with another original character to provide some variety for the show. Feiss’s creation ended up being I. M. Weasel, a heroic weasel (voiced by Michael Dorn) who is beloved by all and always does the right thing. As an antagonist, there’s I.R. Baboon, a moronic and mean-spirited baboon who refuses to wear pants and hates Weasel. The pairing of a weasel and a baboon was inspired by the classic nursery rhyme/song “Pop Goes the Weasel,” and Feiss just thought it would be funny to have a heroic weasel instead of the typical weasel character which is usually scheming and selfish.

I Am Weasel ended up being popular enough to get spun off into its own show. The old segments from Cow and Chicken were also packaged together making the broadcast order of the show a little confusing. It technically spanned five seasons, though it really only had one 27 episode season as its own show. “Happy Baboon Holidays” was part of the first season and originally aired with episode 12 of the Cow and Chicken show which first debuted on September 30, 1997. None of the other shorts appeared to be Christmas themed, and I don’t know why a Christmas I Am Weasel was inserted into a Cow and Chicken episode before Halloween. As we saw with Johnny Bravo last year and Dexter’s Laboratory earlier this month, Cartoon Network didn’t seem to think it mattered if Christmas episodes premiered out of season.

The comedy of I Am Weasel is largely slapstick in nature, and it also relies on the dichotomy of the two leads. It also, like Cow and Chicken and many 90s cartoons, thinks butts are inherently funny. I. R. Baboon’s bright red rump is almost always in frame when he’s present and there are plenty of close-ups on it. It’s probably the most detailed aspect of the character too. The audience is also expected to laugh at how poor and miserable Baboon is justified by the fact that he’s stupid and mean. The squeaky clean Weasel is actually rather boring as he’s pushed into the straight-man mold. He speaks intelligently and is often accompanied by a heroic theme. The series was aware of the fact that Baboon was really the star, since the humor flows through him, and he basically overtakes Weasel in the fifth season.

Of course, he exits butt-first.

This episode opens with I.R. Baboon (Charlie Adler) in his dilapidated trailer doing laundry. Baboon is too poor to own an actual trailer that one would live in and actually lives in something closer to a camper. There’s a knock on his door and he peers through the peephole to see his family:  mom, dad, and sister. His mom (DeeDee Rescher) announces they’ve decided to surprise him for Christmas, and Baboon goes into panic mode because his home is not prepared to host for the holiday. He jumps out the window, leaving his family outside in the snow, to go fetch a Christmas tree. 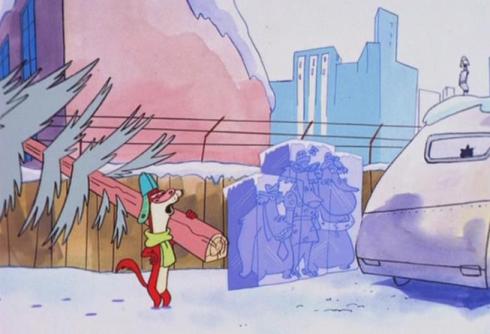 Weasel’s tree actually isn’t much better than what Baboon ends up with.

As Baboon goes off tree-hunting, time passes and snow falls causing his family to freeze. Weasel sees them and drags them into his lavish home which towers over Baboon’s trailer and thaws them out. Once free from their icy prison, the Baboon family is quite taken with Weasel’s home and find him quite charming. Mom even seems tickled by Weasel, but concedes she’s married and offers up her rather large daughter (Marabina Jaimes). Weasel is much too polite to decline the young baboon’s affection, though he’s clearly not interested. 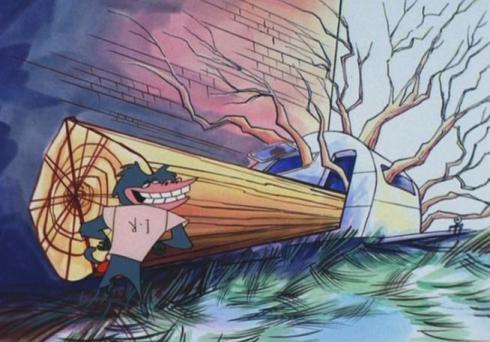 Baboon returns home with a gigantic tree that he shoves through his front door and through the back of his trailer. It basically just lays there looking ridiculous. He notices his family is gone, but looks up and sees them singing carols with Weasel from his balcony. This enrages Baboon and he takes his wrath out on Christmas. He smashes the inside of his home and totally trashes it, destroying anything resembling Christmas. He even rips all of the needles off his freshly harvested tree, but he’s not done, for he needs to take revenge on Weasel. He seals Weasel’s chimney so Santa can’t come and covers the roof of his house with explosives to ensure his Christmas is ruined. After his trap is laid, he seems to lose his enthusiasm for mayhem. He returns to his ruined home to cry. 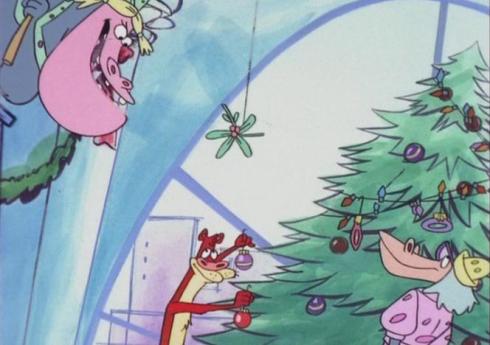 Baboon’s rather large sister really takes a liking to Weasel.

Weasel takes note of Baboon’s sad state, though his reaction feels a bit detached like he doesn’t even know who this Baboon is. He realizes that Baboon needs to be cheered up so he puts on a Santa costume and stuffs a giant sack into Baboon’s home. Baboon looks upon this “Santa” with cautious eyes as the sack is opened to reveal Baboon’s family. He snaps out of his depression and is now happy to have his family in his home for Christmas.

Unfortunately, he fails to tell Weasel about the trap he left for the real Santa. An explosion rockets Santa (Bruce McGill) off the roof and plunges him into a snow bank outside of Baboon’s trailer. Weasel frees him, but finds Santa is feeling a bit blue as this is apparently not the first trap-laden roof he has come across this evening. To help reinvigorate Santa’s Christmas spirit, Weasel directs him to look in on the Baboon family where he sees the four happily exchanging Christmas gifts. This seems to warm Santa’s heart, and all is right on Christmas as the brief short concludes.

Weasel does get to play Santa in this one.

“Happy Baboon Holidays” is fairly low-key for an episode of I Am Weasel. There aren’t even many butt jokes, save for Baboon’s boxer shorts containing a hole to display his prized rear end. Baboon’s tantrum is rather brief, but I suppose the most entertaining part of the episode. It’s kind of sad to see him smash his meager possessions, though I think it’s supposed to be funny to see him stupidly harming himself. The Baboon family doesn’t offer much, and the giant, ugly, sister isn’t really funny either. I don’t think I actually laughed at this show, though I did find the visual of Baboon stuffing a full-sized tree into his trailer kind of amusing.

Visually the show is pretty simple. Backgrounds are rather sparse and the show has a very flat look to it. Baboon is designed with a lot of corners and straight lines and is meant to be rather ugly, though Weasel doesn’t exactly look pretty either. The snow looks nice though and I did get a sense of cold from the visuals. The depiction of Santa is kind of ugly though, not as ugly as George and Junior‘s Santa, but definitely not as nice as the Flintstones/Dexter’s Laboratory one. He comes flying in on a sleigh pulled by four reindeer, which earns instant demerits from this reviewer.

A nice, warm, ass-exposed, hug makes any Christmas worth having.

“Happy Baboon Holidays” is not really worth watching. I suppose if you liked Cow and Chicken it might be worth it to watch the entire half-hour block this segment first aired in. I did enjoy that show when it originally premiered, but I doubt I would now. It was a very 90’s show so it was rather loud and obnoxious. It struck me as the type of show that reveled in appealing to children at the expense of their parents. The show was actually pretty popular and one of Cartoon Network’s most successful. Despite that though, I Am Weasel has not received a proper physical media release. Seasons 1 and 2 were released in Thailand for some reason, while season one was also released in Region 4 (Australia/New Zealand). For US audiences, only sparse releases exist of a few episodes at a time on VHS and DVD. If you want to see this particular episode, you’re actually in luck as it was part of the 2005 release Cartoon Network Christmas 2:  Christmas Rocks. That DVD will likely only set you back around 5 bucks making this special one of the cheapest, and easiest to obtain that we’ve covered. If you’re dead set on not acquiring more physical media though, Cartoon Network is pretty lax when it comes to these old cartoons so free versions are not hard to come by online.