It’s a battle for the hearts of children around the world! What is the superior holiday:  Halloween or Christmas? Today’s entrant is founded on the premise that Halloween is the only holiday to rival Christmas as far as what children look forward to most. This feels more or less on point as a kid I definitely had strong affection for both, with Thanksgiving serving as the necessary evil standing in between the two of them. It probably comes as no surprise to anyone that Christmas was indeed my preferred holiday of the two, but Halloween was not without its charm. As for second best? Yes, I suppose that title went to Halloween though Easter was pretty close. It included candy as well plus I always got a toy from the Easter Bunny to go along with that candy. And as a kid, I much preferred toys to candy. Still, I’d probably go with Halloween because the whole costuming and going out at night was pretty charming. And as I got older it became a chance for mischief when parents no longer supervised the trick and/or treating that took place.

Even though I’m in agreement that Halloween is quite popular, I’d never put it on equal footing with Christmas. Especially not as a kid. As an adult, there are things that come with Halloween that I enjoy more now. And as a parent, dressing my kids up and unleashing them on the neighborhood is its own unique brand of joy. It doesn’t rival Christmas morning though, and I’m big on the whole build-up thing. Yes, Halloween is great, but don’t make me choose between the two because Halloween just can’t win that one.

And that’s partly what makes this episode of Teen Titans Go! so interesting. One would think if Halloween was to be pitted against Christmas the challenge would come from Halloween or a being associated with Halloween. It does not. Rather, this episode comes at things from the opposite perspective, but it creates a character that makes it work 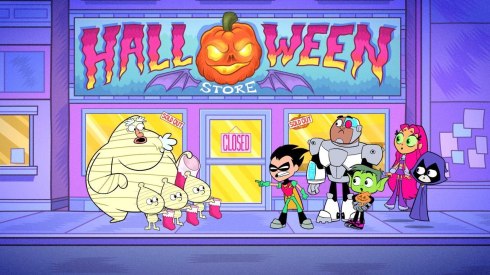 The episode begins on Halloween night. Everyone is getting ready for trick or treating, but a group of individuals dressed as mummies are up to no good. There are four of them, one much larger than the others, and they’re swiping everything Halloween related from town:  candy, decorations, even costumes right off of the children! The Teen Titans happen to be in the area as Robin (Scott Menville) instructs the other Titans that they must secure provisions for the evening’s festivities. As they do so they come to find there’s nothing in town to purchase. Beast Boy (Greg Cipes) tells them to fear not, for he has saved some candy from last year that they can hand out to trick or treaters. He reaches into his pants and pulls out a greasy looking jack-o-lantern bag of treats and the others do not seem repulsed enough by this.

After Beast Boy produces the candy, the mummy group arrives to request it. They offer a “Trick or treat,” when prompted and Beast Boy is ready to hand over the candy, but then they notice something is off with these trick or treaters. One seems too old for the activity, while the others are really small. They wield Christmas stockings instead of Halloween bags or buckets and the big one even has what appears to be a white beard sticking out through his bandages. Robin correctly realizes that this group is really Santa Claus (Robert Morse) and his elves in disguise and he orders the Titans to the car.

The Teen Titans speed off as Santa gives chase in his sleigh. Rudolf leads the way firing lasers from his eyes that eventually pop one of the tires of the escape vehicle. Robin converts it into a nifty hover jet and it flies off into the Titans’ headquarters. Once inside, the Teen Titans regroup and all wonder what’s going on. Robin has it figured out though when he hypothesizes that Santa views Halloween as the only threat to Christmas so he’s seeking to gain control of it by seizing all of the candy and decorations. The other Titans are horrified, and then Santa shows up to basically confirm that Robin is correct. 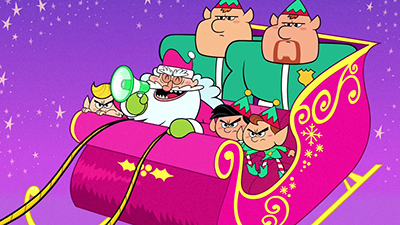 Santa hovers outside the armored HQ in his sleigh pulled by three reindeer. He demands they hand over the last bag of candy, but the Titans refuse. He then offers them bribes in the form of gifts, which nearly tempt Starfire (Hynden Walch) into handing over the candy. Robin instructs her to remain strong and the Titans are able to resist. This forces Santa to try a new tactic:  Christmas music! The music is supposed to infect the group with so much Christmas cheer that they cannot resist the demands of Santa. Cyborg (Khary Payton) is the first to crack as he attempts to run and grab a tree, but he’s stopped by his team members. They all confess that it’s too hard to resist the Christmas spirit with even the dour Raven (Tara Strong) affected by it. Robin concedes they must agree to meet Santa and make a deal.

The Titans let down their guard and allow Santa access to their roof where they all meet. Santa isn’t alone for he has two large grunts and three elves with him. Robin is outraged that they brought weapons and demands they lay them down. Santa does as Robin requests, but he asks that his little elves be allowed to keep their candy cane snacks. Robin allows it and the group begins to barter. Robin offers up other holidays in hopes of appeasing Santa, starting with President’s Day. He tosses a bound George Washington at Santa’s feet, but the fat man isn’t having any of it. Robin counters with a tandem of St. Patrick’s Day and a baby that’s either representing Baby New Year or maybe it’s a cupid. Either way, Santa brushes aside the offering of “trash holidays” and demands Halloween. The elves then turn their candy canes on the Titans revealing they’re actually guns forcing the group to retreat back inside their base.

With the negotiations failed, Robin turns to Raven and her dark arts for help. She requests a pumpkin, but Beast Boy offers up a gourd. In a throwback to the candy sack gag from earlier, the gourd comes from his pants. When asked why he would have a gourd in his pants he offers the same reason, suggesting you never know when you’ll need it. I choose to believe he’s using it to enhance his “package” and the little mugging he does for the camera makes me think I’m right. 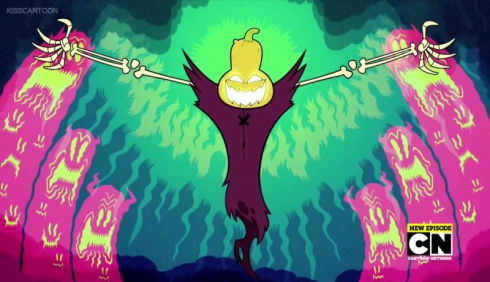 Behold! A new icon for Halloween!

With the gourd in her possession, Raven begins an incantation. She summons the Spirt of Halloween (Payton) who strongly resembles Samhain from The Real Ghostbusters, only with a gourd for a head instead of a pumpkin. The spirit is not alone though, as the Titans return to the roof to unleash their new team on Santa’s minions:  Dracula, Frankenstein’s Monster, and The Wolf Man! Together with the Titans, they put up quite a fight, but Santa ends up getting his claws on the Halloween Spirit and the Titans are forced to surrender. 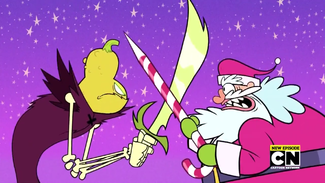 With defeat pulling their chins towards the ground, the Titans hand over the last sack of candy rather than see Santa kill the Spirit of Halloween. Santa is delighted to have the candy in his possession, but when he opens the sack he finds it’s full of dynamite. Cyborg detonates it with a remote blasting Santa all the way back to the North Pole where’s shown with his head stuck in the snow. The Titans all celebrate, and in what is a parody of many Christmas specials, the Halloween Spirit uses his magic to bring Halloween to the town. He even creates a sleigh with skeletal reindeer not unlike what Jack Skellington rode in The Nightmare Before Christmas. As Robin wishes everyone a Happy Halloween, the Titans and Halloween Sprit ride off into the night with the full moon serving as the perfect backdrop.

“Halloween vs Christmas” serves as an offbeat Christmas special. Or is it a Halloween special? It features both so I think it counts as both, similar to the previously mentioned The Nightmare Before Christmas. Where that movie leans more towards Christmas, this one definitely leans more towards Halloween, which is fine. It doesn’t really settle the premise implied by the title, but together with the Spirit of Halloween, the Teen Titans are able to preserve Halloween by fending off St. Nick. It features the usual Teen Titans Go! brand of humor. The villainous Santa the episode came up with is pretty amusing. He gets by with a touch of shock humor since it’s a surprise to see Santa behave in such a manner, but American Dad has been running with an adversarial Santa for quite awhile now too. I really like the performance of Robert Morse as Santa and his affinity for referring to the Titans as “garbage children” kept making me chuckle.

Happy Halloween everyone! Or, Merry Christmas?

The look of this show is something you either like or do not like. It’s very flat as it’s a modern 2D animated show, but it’s also colorful and the actual animation is pretty good. There’s an obvious anime influence to the action shots and in how the characters emote. I find it charming, but I also wasn’t a viewer of the more traditional Teen Titans show that came before this. Some fans of that show seem resigned to hating this one for being a comedy show, but that’s their loss, I suppose. I don’t think this show is going to be remembered as one of the best of its era, but it’s fine and it’s not something I mind watching. It knows when to leave a joke behind and the episodes are too short to really get stale, though I do wish Cartoon Network didn’t show massive blocks of this show seemingly every day when it has plenty of other quality shows it could boost.

It’s more of a Halloween special, but it still knows to end on a moon shot after a flying sleigh just went by.

This is the second Teen Titans Go! episode to appear in one of the countdowns, the other being “Second Christmas.” Neither is a traditional Christmas episode, which feels appropriate for the brand. I found both entertaining, but the holiday mash-up gimmick utilized here makes me appreciate this one just a bit more. Regardless, Cartoon Network is likely to show both more than once this December so keep an eye out if it’s something you want to check out. You can also buy the episode digitally and may even be able to stream it on Cartoon Network’s app. It should be one of the easier specials to find this year should you choose to seek it out.