I feel like we can’t move onto The New Batman Adventures without first talking about Batman & Mr. Freeze:  SubZero. This direct to video feature is essentially the true finale to the original run of Batman:  The Animated Series. It’s existence can be owed to the fact that Warner Bros. wanted to do a tie-in film with the upcoming feature film Batman and Robin which featured Mr. Freeze as the main antagonist. This was supposed to be released alongside that, but since that film was so poorly received it was held back until March of 1998. This complicates things as by that time The New Batman Adventures was airing on Kids WB and had even aired a Mr. Freeze episode that follows the events of this story. It was released to video, which in 1998 meant VHS, and also aired on Kids WB. I could only find one release date listed online so I’m not sure when the television premiere took place (it could have been the same day), but that’s how I first saw this one. 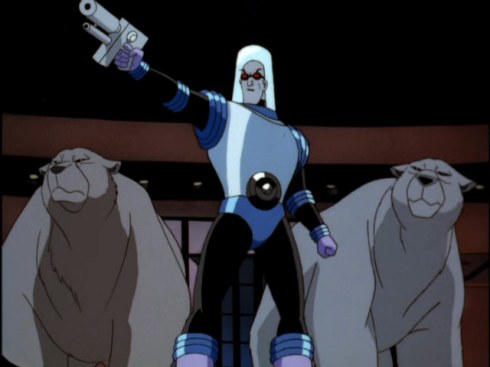 Mr. Freeze has returned, and he brought polar bears this time.

Mr. Freeze was first introduced to the animated viewing audience via “Heart of Ice” which first aired in 1992 as part of the show’s first season. It was so successful at rebooting the previously campy Mr. Freeze into an A-tier villain that the writers were reluctant to return to the character out of fear that whatever they came up with couldn’t possibly match “Heart of Ice.” Eventually, they relented and Mr. Freeze appeared in the penultimate episode “Deep Freeze” in which he partnered with  Grant Walker in an evil scheme, but eventually turned and become a reluctant hero in the end. The episode basically proved what the staff feared initially as it wasn’t nearly as good or on par with “Heart of Ice.” It’s not a bad episode, but hardly a highpoint for the series. As a result, SubZero feels like a second attempt at capturing the magic once again and perhaps the lengthened running time will help tell a worthy story.

For the film, most of the principal players from BTAS were able to return. In the director’s chair is Boyd Kirkland who directed many episodes in the series as well as the show’s other feature, Mask of the Phantasm. Kirkland also co-wrote the film with Randy Rogel, another individual who had several writing credits in the main series. The voice cast was also largely returned for this one including Kevin Conroy as Batman, Loren Lester as Robin, and Michael Ansara as Mr. Freeze. The only notable change is Mary Kay Bergman taking over the role of Barbara Gordon for Melissa Gilbert. This would be Bergman’s only performance as Gordon as she would be voiced by Tara Strong in The New Batman Adventures. The other notable absences are Bruce Timm and Paul Dini, who were credited with this new version of Freeze. They were likely busy working on Superman and The New Batman Adventures during the development of the picture. Also missing is composer Shirley Walker who was replaced by Michael McCuistion, who had previously worked on some episodes of the show. He would go on to score 3 episodes of The New Batman Adventures as well as several more for other DC animated productions. Walker would also contribute to the sequel series. 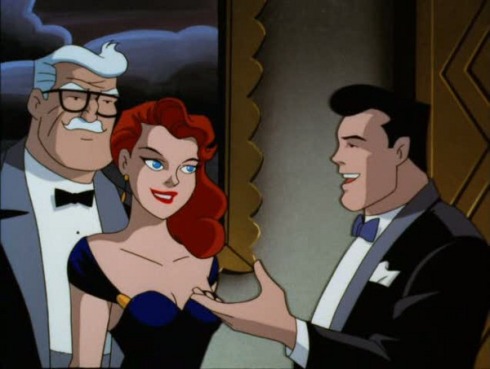 Barbara has a new voice actress, Mary Kay Bergman, and a new beau.

The film basically picks up where the series ended. Victor Fries has made a home for himself in the arctic alongside his still in stasis wife, Nora. He’s acquired a pair of polar bear companions as well as a twelve-year-old Inuit orphan named Koonak (Rahi Azizi). When an expedition by a US submarine disturbs their home and destroys the containment unit keeping Nora alive, Fries is forced to once again don his Mr. Freeze persona.

Nora cannot survive for long outside her containment unit which brings Freeze back to Gotham and in contact with an old colleague, a cryogenics expert by the name of Gregory Belson (George Dzundza). Belson just so happens to be in great financial distress as he tried to game the system with some insider trading in the futures market that didn’t pan out. He’s desperate for cash, and Freeze has access to a gold ore vein in the arctic. He needs Belson’s help to perform an operation for the only hope Nora has at survival is via an organ transplant. Unfortunately, she also has a rare blood type and no organs are available and are unlikely to become available in time, so they’ll need to harvest them from a living donor.

Once again, it’s the welfare of Nora that motivates Freeze.

That’s where Barbara Gordon comes in. She’s the unlucky one who matches Nora’s rare blood type and is also of similar build. Mr. Freeze abducts her from a club while she is on a date with her new boyfriend:  Dick Grayson. It would seem Barbara got over her Bat-crush and settled on the Boy Wonder, though the film makes it seem like everyone is still keeping each other in the dark regarding alter-egos. Freeze, along with his two polar bear companions, takes Barbara to an abandoned offshore oil platform where the surgery will be performed against her will.

Most of the film involves the setup before transitioning to a focus on Batman and Robin’s detective work which will eventually force a showdown with Mr. Freeze. At a mere 67 minutes, the mystery of where Freeze took Gordon and what he wants with her isn’t lingered on for too long and there’s plenty of time saved for the climax on the oil rigging. It’s paced well and the movie moves along without feeling rushed. If anything is sacrificed, it’s the final confrontation at the end. Batman and Freeze really don’t have much of a confrontation, as circumstances force them to contend with a burning platform. It’s a similar setup to the episode “Deep Freeze” in that regard, but with smaller, more obvious, stakes.

Batman and Robin have some detective work ahead of them, but at least Robin’s gloves are now the proper shade of green.

The film in large part feels like a referendum on “Deep Freeze.” If you recall, in that episode Freeze learns his wife is still alive and then immediately agrees to help a wealthy man destroy the planet to revive her. It was a pretty outlandish setup which is why Batman was able to convince Mr. Freeze to not go along with Walker’s plan. In this film, Nora’s life is on a timer and in order to save her Freeze merely has to sacrifice one woman he doesn’t even care about. While it would have been interesting to see how he would have responded had someone been able to reason with him that Nora would never want an innocent to die so she could live, that’s never broached and it’s conceivable to think Freeze would not be swayed. He’d likely rather Nora live and despise him than for her to die. Freeze’s desperation causes him to act impulsively throughout the picture, and his relationship with Belson gives him a plausible reason to return to Gotham in an effort to save his wife knowing it will likely put him in the crosshairs of The Batman. 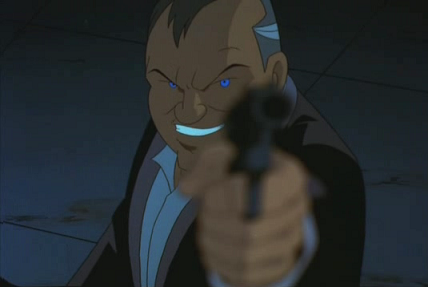 Belson is pretty much a slime ball.

In many ways, it’s Dr. Belson that ends up being the film’s ultimate villain. He’s described by others as a jerk and he’s essentially a criminal for engaging in insider trading. Had he been successful with his futures play he might have been caught. When Freeze first approaches him for aid the film teases he won’t go along with murder, but he’s mostly feigning his apprehension and just uses it to leverage more money out of his old colleague. 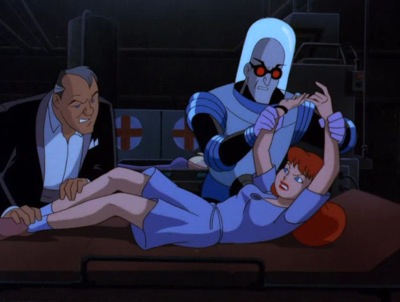 Barbara may spend most of the film kidnapped, but she never stops fighting.

Barbara Gordon’s kidnapping may be the main plot device that gets this film rolling, but she’s hardly playing the role of damsel in distress. Her kidnapping is voluntary, as she doesn’t want Mr. Freeze to harm any of the patrons of the club she’s abducted from, especially Dick. She also tries to escape her confines more than once and realizes she has a sympathetic ear in Koonak. It would have been disappointing if the woman who is Batgirl just sat around and waited for Batman and Robin to save her, but Rogel and Kirkland know what they’re doing.

The film is visually quite nice and a noticeable cut above the television series. Dong Yang Animation, which animated most of season 2 and some of season 1, did the traditional spots with Koko Enterprises doing the CG. The colors are an obvious upgrade as Robin’s costume actually features two shades of green instead of that odd blue. The scenes on the flaming oil platform are especially spectacular and it’s obvious more care was put into this project as a whole. I also really like a spot at the beginning of the film where Fries emerges from the arctic waters. His body is coated in a thin layer of ice which cracks and breaks apart as he moves. The CG is used probably more often than I would like. It’s dated, but not woefully so. It’s a touch distracting in some of the chase sequences and with the Batwing, but it looks nice at the film’s onset with Fries swimming in the arctic amongst a swarm of CG salmon. The only real disappointment I have with the look of the picture is that it’s presented in 4:3 instead of 16:9. I assume that’s the aspect ratio it was created for since it was going to be broadcast on television, and since this was before the proliferation of 16:9 television sets, there was basically no need to develop for that if it was only ever going to be viewed on a TV set.

I hope you didn’t get too attached to Koonak, because he’s not coming back.

This film is the final presentation of Batman and the other denizens of Gotham in this art style. For some characters, like Summer Gleeson (Mari Devon), this is their final appearance all together. Veronica Vreeland (Marilu Henner) also has a cameo, but as a blonde now instead of her traditional red hair. It’s also the last appearance of Nora Fries and the only appearance for Koonak. I definitely miss this art style and the change for The New Batman Adventures is what kept me from getting into that series initially. When this surfaced on television it was like going back to an old friend.

Batman & Mr. Freeze: SubZero is a worthy follow-up to “Heart of Ice.” Even with the benefit of triple the minutes, it’s still not quite as captivating as that episode and I think that’s largely due to the surprise that initial episode had going for it. This film at least takes the character of Mr. Freeze and gives him a reason to act like a villain once more. It’s surprising that Paul Dini and Bruce Timm weren’t involved, but maybe turning to the duo of Kirkland and Rogel meant the pressure of doing something worthwhile with the character was largely removed freeing them to explore him unencumbered. For both, this was their last contribution to Batman: The Animated Series and it’s a worthy note to go out on. Had this been a theatrically released venture we’d probably unfairly compare it with Mask of the Phantasm where it would come up short, but for a direct-to-video venture this is more than acceptable.

Batman & Mr. Freeze: SubZero was originally released on VHS, but has since been released on DVD and Blu-Ray. It’s also streaming, if that’s your preference. The best way to view it, for my money, is via the Batman:  The Animated Series Blu-Ray set which includes this film as well as Mask of the Phantasm in one package alongside the entire television series.