Batman: The Animated Series – “What Is Reality?” 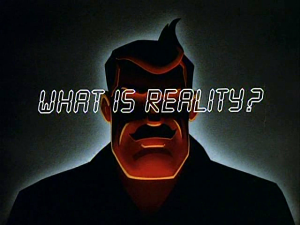 After having escaped both Batman and the Gotham PD, The Riddler (John Glover) is back to erase his criminal history and likely get some measure of revenge against Batman and Robin for ruining his prior plans. It’s a rare example of the show having a direct follow-up to a prior episode as villains are often captured and released from Arkham or jail offscreen. It’s not often we have a villain escape and then make reference to their fugitive state, but that’s what we have here in what is only the second appearance of the quite popular Riddler character.

The episode opens with a jogger running through the Gotham night. He decides to withdraw some money from an ATM only to find it’s spitting out riddles instead of cash. Not only that, it shows his balance as zero which enrages the man. The scene jumps to Gotham’s version of Wall Street where investors are being taunted by the scroll not by failing prices, but by riddles. We then see the Gotham Department of Motor Vehicles suffer a similar fate as Dick and Alfred wait in line to dispute a ticket of some sort. All of this brings us to Gotham PD where Batman and Gordon are discussing the obvious – this is the work of Edward Nygma, aka The Riddler. He’s been on the run ever since the events of “If You’re So Smart Why Aren’t You Rich?” and has so far managed to illude capture. Gordon then notices that all online records of Nygma’s very existence are being deleted at an alarming pace to make it appear like he does not, and has never, exist. Before Batman can ask about the hard copies of his records, they’re informed that a package has arrived at headquarters and it’s ticking. 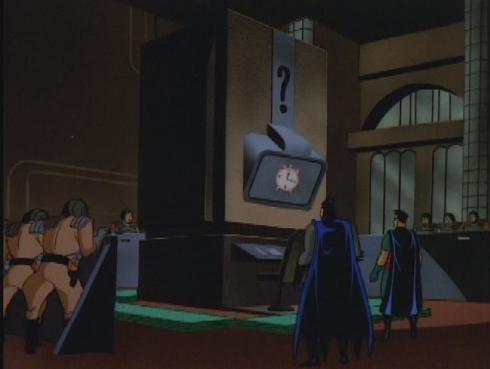 The shipping on that must have cost a fortune.

Gordon is apparently comfortable with letting Batman and Robin handle this potential explosive device as the two are seen examining the rather large package. Robin notes that the blocky structure is a puzzle and boasts that he was able to complete a Baxter’s Box puzzle in record time, so this should be no problem. A Baxter’s Box, as best as I can tell, is this world’s version of a Rubik’s Cube. I guess even referencing that famous toy could fall into a copyright area? Robin is able to get the box to open and inside they find a large console complete with a monitor, two seats, a massive keyboard, and a pair of headsets. Not knowing what to immediately make of it, Batman leaves Robin to check it out. Meanwhile, some cops have stolen the hard copies of Nygma’s records and are shown delivering them to Nygma himself who is watching all of this via a monitor in an undisclosed location.

Batman looks to the various riddles that Nygma left behind via the ATM, stock market, and DMV. They’re simple riddles, so Alfred and he deduce they should focus on the numbers contained in the riddles, which when translated to roman numerals, leads Batman to the DMV. There he finds some goons accessing the hard copy records there, likely searching for Nygma’s files. Batman engages them which leads to the action spilling outside where a Riddler Van tries to run down the caped crusader. When Batman winds up on the hood of the vehicle, he finds it’s being driven by a robot with a camera for a head. Nygma is able to taunt him as well, and points out the vast amounts of explosives in the back of the van. Batman is able to avoid a rather explosive demise, but not without detonating the van making quite the mess. Riddler is able to leave him another clue though, because that’s what he does, about where to turn his attention to next.

At Gotham PD, Robin has discovered that the console delivered there is actually a virtual reality machine. He demonstrates how it works to Gordon before taking off for a snack leaving Gordon plugged into the machine. Once gone, Riddler appears in the virtual world and is able to trap Gordon. When Robin returns, he receives an electrical shock from Gordon’s headset when he tries to remove it. Batman soon arrives as Riddler’s most recent riddle directed him to Gotham PD headquarters. Robin gives him the rundown and Batman is left with no alternative but to enter the VR machine and rescue Gordon. Riddler has placed Gordon in a high velocity device within the world similar to what astronauts use to train for the force of space travel. Riddler claims Gordon’s heart can’t last in the machine indefinitely injecting a time component into the situation. Robin warns Batman that he’s basically entering a world controlled entirely by The Riddler which prompts Batman to insert an ear piece into one ear so he can maintain a link with Robin while inside the game. Robin is also able to watch what is going on via the rather large monitor Riddler included. 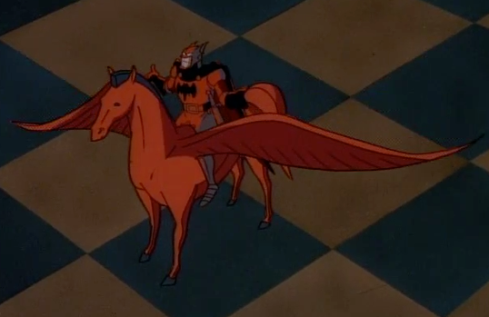 If you’re going to call yourself the Dark Knight then you should look the part.

Once in the world, the episode’s perspective shifts to that. It’s mostly a world depicted in shades of red not unlike a Virtual Boy, but with some black and white as well. Riddler pushes Batman along via clues which leads him to a chessboard. Batman is forced to literally adopt his Dark Knight persona to sneak past which just leads to a constellation based puzzle for him to solve, with Robin’s help (he’s big on astronomy apparently). Eventually, Batman finds himself face to face with The Riddler and a giant version of a Baxter’s Cube. Not wanting to waste more time in figuring out the puzzle, Batman realizes he has some control over himself in this virtual world and imagines he has mallets instead of hands. He bashes the cube, which just prompts the Riddler to attack. He splits himself into multiple Riddlers, and Batman responds by doing the same. As they engage in a competition of who can create more versions of themself, Batman points out how hard it must be for Riddler to maintain control over his virtual world when splitting his focus amongst the many duplicates he’s made. Just pointing this out causes the world to collapse, and the Baxter’s Cube breaks away revealing Gordon.

Well this presents a problem.

Batman and Gordon are able to escape the virtual world. Once outside, The Riddler returns to the monitor to taunt them and leave them one final clue about where he could be. Just after doing so, he lets out a horrible scream indicating he’s in some trouble. His clue was enough for Batman to figure out his location, and when Batman, Robin, and Gordon find the Riddler he’s still connected to his game unable to remove himself much in the same manner as Gordon previously. Batman remarks getting him out of there may be a riddle no one can solve (spoiler: this isn’t the last we’ll see of The Riddler!) as the credits roll.

“What is Reality?” is a decent follow-up the The Riddler’s debut. It doubles-down on Riddler’s fascination with video games and virtual worlds, which is an interesting take on the character, and one that feels very of the times. I mentioned previously how I liked that this episode directly deals with the fallout of the previous one, even though it isn’t a two-parter. The writers seemed to not want to really bother with riddles this time around though, opting to deliberately have The Riddler use simple riddles but with a bit of a convoluted message hidden in each one. I’m not particularly good at riddles so I feel a little uncomfortable for criticizing the episode for going easy on them, but maybe they should have hired somebody who could craft a good riddle? As a result, The Riddler seems rather stupid as his efforts are not even remotely challenging for Batman to figure out. Batman also easily bringing an end to the VR world is rather underwhelming, but maybe they wrote themselves into a corner since they gave Riddler complete control over the world. The ending is kind of chilling though. After almost rooting for The Riddler in his debut he’s a bit more of a conventional villain here, but his actions never make us desire a fate like that for him.

Riddler’s in a rather sorry state at the episode’s conclusion, but he’ll bounce back.

This episode marks the final contribution from Akom Productions. They were let go after the some-what disastrous “Joker’s Wild” episode. Perhaps because of this they did an especially careful job with this episode. It looks fine and I have no complaints about the animation. There are some very minor errors, but most episodes contain one or two. It’s not a hugely ambitious episode, though some fun things were done with the virtual world. I’m glad only a few minutes are spent there though as that red palette gets kind of irritating to look at.

This isn’t the last we’ll see of The Riddler, which I can’t imagine comes as a surprise to anyone. It is the last we’ll see of him for a while though and his last appearance of season one. Unfortunately, his next appearance doesn’t mirror this one by dealing with the fallout. He’ll just be his normal self leaving us to wonder how he extricated himself from the VR world. I guess for them not to tell us means it wasn’t a very interesting story. I bet they just unplugged the thing, that seems to be the solution for most electronic mishaps.

This entry was posted on Friday, August 24th, 2018 at 12:00 am and tagged with akom production co., batman, dc comics, edward nygma, james gordon, robin, the riddler and posted in batman the animated series, Comics, Television. You can follow any responses to this entry through the RSS 2.0 feed.
« DuckTales Season One Review
Dragon Ball Z: Broly – Second Coming »

One response to “Batman: The Animated Series – “What Is Reality?””