Batman: The Animated Series – “The Cat and the Claw – Part II” 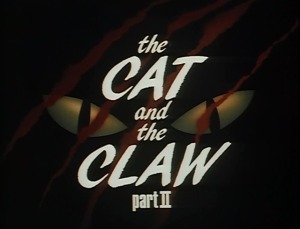 “The Cat and the Claw: Part I” was the big kick-off for Batman: The Animated Series. It was also the introduction of Catwoman, Batman’s closest foil, and portrayed her as a Robin Hood of sorts robbing from the rich to benefit the poor, neglected animals of Gotham. Her acts aren’t quite so noble as that, as she lives a pretty pampered lifestyle in a Gotham penthouse with an assistant on hand 24/7 so not all of those riches are going to the animals. It also introduced the relationship between Batman and Catwoman in which Catwoman has an attraction to Batman while Bruce Wayne has his eye on Catwoman’s alter-ego Selina Kyle. 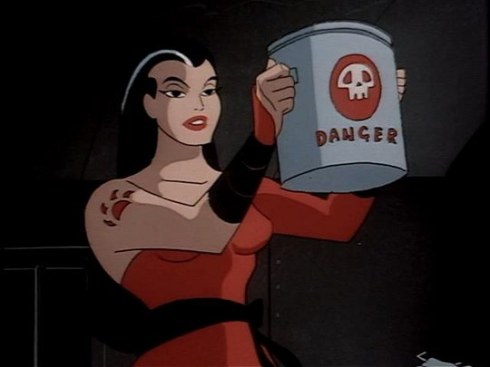 Ever remove the label from a can of Chef Boyardee?

Not to be forgotten, is the true villain of both episodes:  Red Claw. Red Claw is a soviet terrorist who has infiltrated Gotham and stolen a biological weapon in which she utilizes to hold all of Gotham at ransom. Catwoman is brought into the fold by virtue of the fact that a company Red Claw is conspiring with has seized a piece of land once intended as a sanctuary for large cats. Batman, naturally, just wants to make sure Gotham isn’t destroyed.

The episode picks up where the previous one left off. Catwoman has been followed back to her apartment by a member of the Red Claw gang and her identity is now known to her adversaries. Batman is tipped off about the gang’s intention of knocking off the plague weapon which is coming through Gotham on a train (seems to be some security flaws). Batman isn’t able to prevent the theft, obviously or else we wouldn’t have much of an episode, but he does get to come face to face with Red Claw.

The following day, Bruce and Selina are out to try and have a date once more when Bruce’s car is assailed by a member of the Red Claw gang. There’s a fun chase that ensues with the Red Claw car just trying to run Bruce and Selena off the road while Bruce gets to demonstrate his Batman driving skills as they eventually get away (Bruce can afford the repair bill). This was all the result of Red Claw knowing Catwoman’s identity, and since Selina has no idea about Bruce, she kind of figures out that they’re onto her. Bruce also notices traces of cat hair left behind by Selina and apparently this is good enough for him to know that she’s Catwoman. 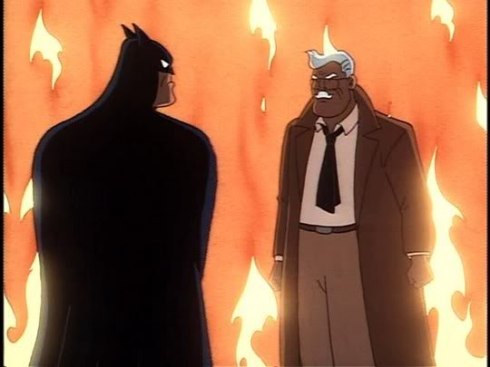 Thanks for the help, Batman. Next time, can you stop the bad guys with less fire?

The rest of the episodes ends up being a Batman/Catwoman team-up. Catwoman is portrayed as rather cocksure, as she was in the previous episode, and careless as a result, necessitating help from Batman. They both end up captured and have to escape from Red Claw. There’s some nice action sequences and their escape is actually pretty thrilling, even if it doesn’t seem in doubt. Red Claw proves to be rather ruthless, but just as ineffective as most Batman villains. A confrontation between her and Catwoman is setup, but doesn’t really pay off. Catwoman  is also teased to have some special connection with not just her pet Isis, but cats as a whole. I don’t recall this playing a role in a future episode, but I could be mistaken.

People hoping for a Batman/Catwoman pairing following this episode were probably let down by its ending. After the mess with Red Claw is cleaned up, Catwoman escapes and flees to her penthouse. Unknown to her, Batman has already been there to advise her assistant, Maven, to flee since Red Claw is looking for Selina. He’s there waiting for her and when she tries to turn on the charm to get out of the predicament he coldly slaps a pair of handcuffs on her while he suggests this hurts him more than it hurts her.

Just kidding, want to come over to my place?

Trying to portray Batman’s arrest of Catwoman as some noble act feels kind of silly. I know they only have so much time to work with, but Bruce’s affection for Selena could best be summed up as a simple crush. They never get to know each other, though I suppose a life-harrowing event such as the car chase might leave more than a mark. I touched on it in the last episode, but Batman breaks the law all of the time in small ways and is able to justify it. Selina seems like she does the same and perhaps Batman could have steered her into a better direction. Nevertheless, he’s not willing to bend.

Some have voiced displeasure with Catwoman as a whole and how the show handled her. Even Bruce Timm has suggested they could have done a better job with her and it’s hard to disagree. I wish she wasn’t so incapable of taking care of herself across two episodes, always needing help from Batman. I also think they couldn’t decide if she should be an anti-hero or a true villain and tried to have it both ways, which feels noncommittal and isn’t particularly satisfying. She’ll pop up again, but her future appearances seem to only exacerbate that aspect of her character.

Just as was the case with Part I, Part II does look great and the colors, animation, and style are some of the best the show would produce. I love the sequence of Catwoman just narrowly sliding under a closing steel door and the fire effects, perhaps dated, are still pretty spectacular. All of this leads me to render a verdict of style over substance in the case of “The Cat and Claw” as a whole, and especially Part II. Part I was decent setup, but the payoff wasn’t. At least they had the foresight to utilize a throw-away villain like Red Claw when the focus was going to be put on Batman and Catwoman. It just felt too early for those two to team-up and for Batman to figure out her identity. And for a character as prominent and popular as Catwoman I don’t think it would have been too risky to plan on featuring her in 2 or 3 episodes before this.

One response to “Batman: The Animated Series – “The Cat and the Claw – Part II””