Batman: The Animated Series – “The Cat and the Claw – Part I” 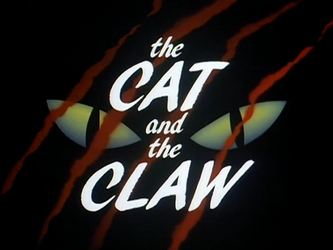 This may be episode number 15, but it’s actually the very first episode of Batman: The Animated Series by air date. Airing as a special prime time sneak peak, “The Cat and the Claw – Part One” featured the debut of a very popular Batman foil – the not so villainous Catwoman. Like The Penguin, Catwoman was fresh off of starring in Batman Returns where she was played by Michelle Pfeiffer. Also like The Penguin, Catwoman was a regular on the Batman television series from the 1960s and was a featured villain in Batman: The Movie. In terms of Batman adversaries, few were as well known to audiences as Catwoman. 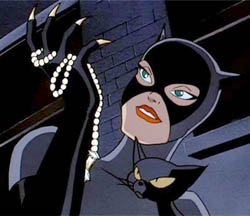 Unlike The Penguin and Joker, Catwoman was not made an existing villain in this series. This episode marks her debut to both the television audience and to this version of Batman as well. They have never crossed paths before their meeting here, though one gets the impression that Catwoman has been up to this sort of thing for quite some time. She’s quite good at getting around and breaking and entering and even has little cat-shaped caltrops to make use of. Her outfit is very similar to Batman’s and I suppose that’s intentional. She even has a yellow-gold belt. Really, the only difference is she lacks a cape. This version of Catwoman is less an adversary and more another aspect of how Batman could operate. While he may be a vigilante out to do what’s right while largely adhering to the law of the land, Catwoman plays more fast and loose with the law and is willing to break it, going as far as thievery, if the ends are justified by the means. Batman’s ultimate goal is also to help the good people of Gotham by reducing crime, where as Catwoman is basically an animal rights activist who may or not prefer animals (in particular, cats) to people.

The episode opens with Catwoman (Adrienne Barbeau) out on the prowl. She’s after something and we get a look at how she operates. At her side is her trusty cat Isis whom has been trained to infiltrate locations and even deactivate traps. Catwoman is after a diamond necklace, but she attracts the attention of our hero. She and Batman have a playful little chase and it’s impressed upon us almost immediately that the Batman ignites something within Catwoman. Catwoman is able to elude Batman, in part because he stopped to save her precious cat from becoming roadkill. He seems willing to let her off and try another time. 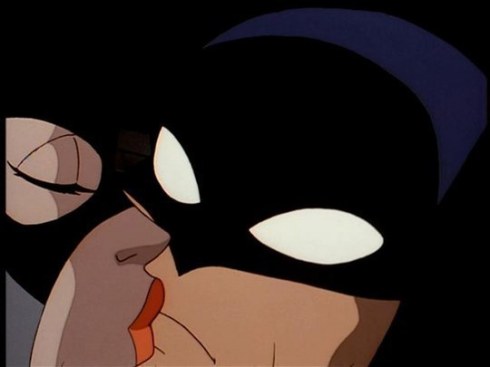 The Batman/Catwoman dynamic isn’t anything new, and it’s not surprising to see them go this route. Also not surprising, is that Bruce Wayne and Selina Kyle, Catwoman’s real life persona, are destined to meet. Wayne is attending a charity auction where a date with Gotham’s most eligible bachelors is what’s up for bid. Kyle grossly outbids the other ladies for the services of Bruce and he’s immediately smitten with the blond bombshell. Kyle is disinterest though, as she was only doing it for the charity which is an animal charity. We’re given insight into Catwoman’s motivations for her thievery. Rather than enriching herself, it would seem her aim is a bit like Robin Hood (in her mind), though instead of giving to the poor she’s donating to animal rights groups.

Before Bruce and Selina can formalize plans for their date, that Bruce insists upon having, gunfire is heard and Batman is forced to spring into action (this seems to happen a lot to poor Bruce). Batman has to deal with some terrorists, and upon doing so is informed by Commissioner Gordon that a terrorist known as Red Claw is believed to be operating in Gotham.

They would make for a nice looking couple.

The next day, Bruce shows up for his date just as Selina is informed by her lawyer that a proposed sanctuary for large cats is being acquired by a corporation that intends to bulldoze the preserve and put up a resort. Selina is irate, but Bruce happens to know the CEO of the corporation, Multigon International, and arranges a face-to-face between he and Selena. It’s fruitless, and Selina storms out angry alongside Bruce. As they leave, Red Claw appears to inform the CEO of Multigon, Stern, to keep an eye on Ms. Kyle. Red Claw is somewhat shadowed but we see Red Claw (Kate Mulgrew) is actually a woman and a pretty tough looking one at that. 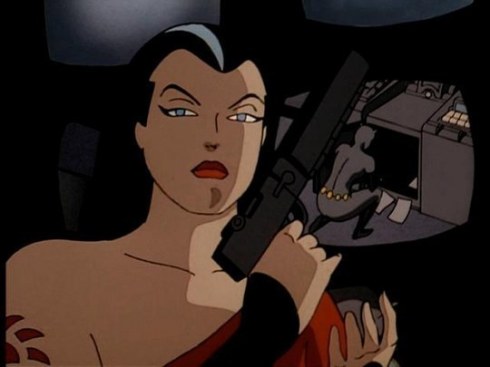 Sort of forgotten in the debut of Catwoman is the real villain of the episode – Red Claw.

Selina and Bruce agree to end their date prematurely, since she’s not much in the mood following their meeting with Stern, and agree to try again tomorrow. That night, Catwoman returns to Multigon to do some sleuthing. She’s able to get in, but not undetected. Soon she’s swarmed by guards and manages to reach the rooftop only to find herself in a precarious situation on the edge of the building. Naturally, Batman is there to make the save. They have another playful exchange, though Batman gets serious with her and demands she unmask. Catwoman feigns being hurt by Batman’s rejection, which causes Batman to react sympathetically giving Catwoman an opening to flip him over her shoulder and escape.

Back at her apartment, Selina boasts to her assistant Maven that the night was a success, but we’re soon shown an individual affiliated with Red Claw has traced her back to her apartment. He utters an ominous warning for us, the viewers, before the episode ends. 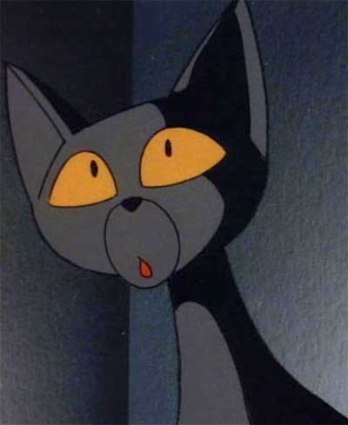 Isis is a bit of a scene-stealer.

The first part of “The Cat and the Claw” successfully introduces us to this version of Catwoman and the role she’ll play in Batman’s rogues gallery. Her intentions are mostly good, but her means are unlawful. You could argue Batman’s are as well since he routinely sneaks into places he’s not welcome and performs search and seizures outside of the law, but Catwoman’s willingness to steal is apparently the line for Batman. The little we see of Red Claw, a villain created for this show, depicts her as a pretty ruthless terrorist and we’ll have to wait for Part Two to see just how far she can be pushed. This show seems to clearly love having sympathetic villains, so this turn for Catwoman isn’t too surprising. She bares no real resemblance to the character we had just seen in Batman Returns, aside from the general look of her costume and whip accessory. I am left wanting to see more of the Selina character. I’d like to know more about what brought her to where she is, but we’re never really going to get that from this show unfortunately. I also do like the dynamic at play with Batman where Catwoman clearly has the hots for the caped crusader while Batman knows he needs to keep his distance. That’s in contrast to Bruce Wayne’s obvious interest in Selina Kyle, while she seems completely uninterested in Bruce as a potential partner. It’s not a unique setup, but it is effective at creating some drama. It’s also easy to see why this was picked as the premiere, because in addition to the familiar villain, the episode also looks great. Lots of sharp blacks and great animation, especially with Catwoman’s adorable little cat Isis. We’ll have to wait for Part Two to see how this all plays out.

This entry was posted on Friday, January 5th, 2018 at 12:36 am and tagged with adrienne barbeau, batman, catwoman, kate mulgrew, red claw, super hero cartoons and posted in batman the animated series, Comics, Television. You can follow any responses to this entry through the RSS 2.0 feed.
« Batman: The Animated Series – “Heart of Ice”
Batman: The Animated Series – “The Cat and the Claw – Part II” »

One response to “Batman: The Animated Series – “The Cat and the Claw – Part I””