Once upon a time, Bugs Bunny was a big enough star to land numerous television specials. He’s still a recognizable character across the world, but I sometimes feel as if Bugs isn’t as loved as he should be. I can’t recall the last time I saw him standing next to a Warner Bros. logo in front of a film. I just feel like he should be on the same level as Mickey Mouse and Disney does a much better job of promoting their mascot than Warner.

In 1979 Bugs returned to the small screen for a Christmas special. Unlike some other Bugs TV specials, this one wasn’t just a collection of previously released theatrical shorts but a collection of all new shorts with an obvious Christmas theme. It features the most recognizable of Looney Tunes as well as the voice of Mel Blanc. It’s broken up into three acts that are each different shorts:  Bugs Bunny’s Christmas Carol, Freeze Frame, and The Fright Before Christmas. Fritz Freleng directed the book-end shorts as well as the joining segments while Chuck Jones handles Freeze Frame.

Our carolers for the evening, no Daffy is pretty disappointing.

The special opens with Bugs leading some other Looney Tunes characters in some carols before we’re whisked away to an adaptation of A Christmas Carol. In this, Bugs is sort of the narrator, but he’s also a part of the story as Fred and Jacob Marley. Yosemite Sam is Scrooge and Porky is Cratchit. Tweety is the Tiny Tim character, though he’s not really essential to the story. Bob asks Scrooge for some coal, which Scrooge denies because he gave him a piece last Tuesday (Disney will kind of steal that line). Fred, Scrooge’s nephew, is there to wish his uncle a Merry Christmas with the carolers and notices Bob’s predicament. When Scrooge tosses him out, Fred swipes a piece of coal and gifts it to Bob. Scrooge’s cat, played by Sylvester, sees this and alerts Scrooge who tosses everyone out and fires Bob. Bob thanks Fred, even though he did kind of get him fired, and invites him over to his home for dinner. There he meets the rest of the family and sees how little they have. A knock on the door is from a man with the light company and he comes in and takes the family’s candle. Another knock is from the bank – Scrooge is foreclosing on the mortgage and kicking the family out tonight. That’s one harsh lender. 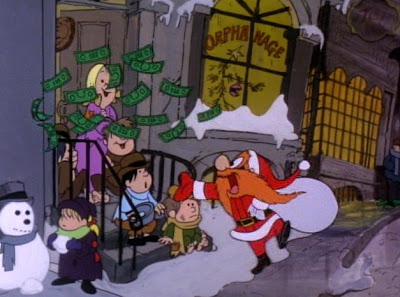 You know what they say about a fool and his money.

Bugs takes it upon himself to teach Scrooge-Sam a lesson uttering a popular Looney Tunes line of, “Of course you know, that this means war.” He returns to Scrooge’s house to first annoy him with carolers. Then he throws snow in his hot bath. To really scare him straight though, he dresses up as a ghost and convinces Sam that he’s his deceased former partner Jacob Marley. Rather than run through the usual past, present, and future routine, Bugs is able to just get to the point by threatening Scrooge with eternal damnation. It’s enough and Scrooge heads over to the Cratchit house to set all the wrongs right, though he’s not particularly happy to do it. Once done, it’s revealed to be a sort-of play and Sam assures Bugs he’ll be getting his money back. Wile E Coyote and Roadrunner look on from outside the house, which leads us into the next segment.

The Coyote is busy researching road runners (book title “Everything You Ever Wanted to Know about Road Runners but were Too Afraid to Ask”) and discovers they love deserts and hate snow. One ACME snow-seeder later and the Coyote is buried under a pile of snow. Every time he tries to use the snow generator it just drops a pile on him, even when he takes shelter in a cliff face it just shoots the snow horizontally. Realizing that’s a dead end, he resorts to the tried and true method of switching two road signs, one pointing to the desert with one pointing to a snow summit. The Road Runner falls for it and ends up on a frozen pond unable to get much traction. The Coyote is ready with a pair of speed skates and calmly skates a circle around the Road Runner intending for the bird to fall through the ice. Of course, the ice under the Coyote drops instead out leaving the Road Runner floating on a circular piece of ice. He runs in place and creates an outboard motor effect to escape the trap.

Next the Coyote uses rocket-powered skis to chase the Road Runner while some subtle Christmas music sets the mood. The two become buried in the snow with only their tails exposed. In a repeat from an old Bugs Bunny short, the Road Runner’s tail splits in two when he approaches a tree there-by allowing him to go around the obstacle, while the Coyote possesses no such ability and merely crashes into the tree. He then acquires a dogsled with a team of 12 92lb dogs guaranteed to run-down any road runner. Turns out, the dogs also love coyotes and they maul him. Had he checked the invoice more thoroughly he would have noticed. Next comes what’s probably the Coyote’s worst idea of the short – he rides a rocking horse like a sleigh while wielding a Road-Runner Lasso. All he does is entangle himself in the lasso while the rocking horse plunges off a cliff. It has the misfortune of landing on some train tracks. You know the rest. The Coyote then makes a giant snow ball he intends to crush the Road Runner with. He just ends up getting stuck to it and when it rolls towards a cliff he falls with the snowball close behind. He pops out of the snow looking like Santa Claus and holds up a sign wishing the viewer a Merry Christmas and Happy New Year.

We go back to the carolers and Bugs is still leading them in song when his nephew shows up to remind him that he owes him a Christmas story. Bugs informs him that he’s going to tell him all about Santa Claus and the night before Christmas. We’re then taken to the North Pole where Santa is speaking offscreen about getting a move on. High above an airplane soars by and the pilots are discussing their cargo – a tasmanian devil. The cargo falls from the plane and Taz ends up landing in Santa’s suit which was hanging out on a clothes line. He ends up in the sleigh (six reindeer, grrrr!) and the reindeer take off.

Back in Bugs’ home, or his nephew’s, he’s reading the little bunny A Visit From Saint Nicholas when a sound on the roof causes his nephew to get all excited for Santa. Bugs sends him to bed while Taz jumps down the chimney and lands in the roaring fire below. Bugs cracks some jokes at Taz’s expense, but invites him in for a snack. Taz is eager for food and not only does he devour Bugs’ milk and cookies but the entire table as well. Bugs then reads him his nephew’s Christmas list while Taz sets to eating the decorations on the Christmas tree. Eating the lights cause him to get electrocuted, but it doesn’t seem to bother him too much. Bugs suggests he sit by the fire so he can make him some popcorn, but Taz eats the kernels before Bugs can get the popper and the heat from the fireplace causes them to pop in his stomach. He starts to wreck the place, and Bugs sets up a gift exchange booth and gifts Taz a present – a self-inflating rubber raft (I expected TNT). Taz eats it, and when it inflates he floats away.

Bugs’ nephew Clyde wakes up disappointed that Santa didn’t bring him anything. Bugs assures him everything will be all right and they set out to return Santa’s sleigh. As they soar through the air Bugs wishes us a Merry Christmas. Back from the break, the Looney Tunes are sleighing along and singing carols when Taz decides in to eat their sleigh. That’s basically the end and they must have only tacked on this final segment so Porky can chime in with his signature good bye, only he stammers his way through “Happy Holidays” instead of the usual. 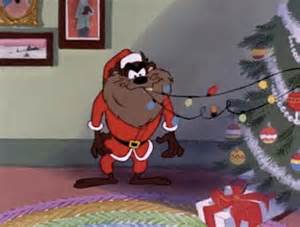 Bug’s Bunny’s Looney Christmas Tales is pretty underwhelming for the old rabbit. A lot of the gags have been done before, and the animation is definitely television quality as opposed to move theater quality. Of the three segments, the middle one, Freeze Frame featuring the Road Runner and Wile E, is probably the best. It’s nothing you haven’t seen before, but it’s a solid Road Runner short with just a dash of Christmas thrown in. Yosemite Sam as Scrooge makes a lot of sense, but it’s still a tired tactic to adapt A Christmas Carol. At least  the light department gag is probably the best joke in this one and probably the only time I laughed out loud. Tweety is essentially wasted though. And where’s Daffy? Did someone think he and Bugs could not co-exist in the same Christmas special? Is Daffy too big a star to play second banana to Bugs?

Watching this one, I inevitably feel compelled to come back to the Bugs and Mickey comparison. While Mickey was given Mickey’s Christmas Carol, yes a trope to adapt that story but done so well it’s probably my favorite adaptation of it ever, Bugs was gifted this. It’s unfortunate. While it’s true the format of a typical Bugs short doesn’t lend itself to a Christmas tale quite as easily as the more adaptable Mickey Mouse, they still could have done better. Why not have Bugs just wind up in the North Pole and his antics there mess up Santa’s plans or something? We don’t need to make Bugs more wholesome, we just want to laugh and get in a little Christmas cheer at the same time. Oh well. 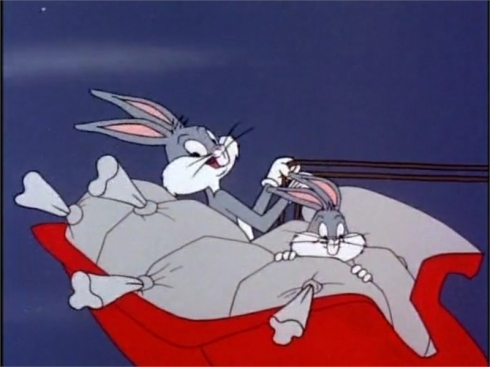 Of course Bugs would end up in Santa’s sleigh at some point.

Bugs Bunny’s Looney Christmas Tales probably won’t be shown on television this year. If it’s shown at all, it would probably be on Boomerang. If you insist on viewing it, you can find it on the fifth volume of the Looney Tunes Golden Collection set of DVDs. They’re sold individually or as a box set with all six volumes and it’s actually really affordable and comes highly recommended by yours truly, even if this special isn’t particularly…special.

This entry was posted on Friday, December 15th, 2017 at 1:00 am and tagged with bugs bunny, christmas cartoons, christmas specials, chuck jones, frizz freleng, mel blanc, porky pig, road runner, tasmanian devil, tweety, warner bros, wile-e coyote, yosemite sam and posted in christmas, Television. You can follow any responses to this entry through the RSS 2.0 feed.
« Dec. 14 – Bonkers: Miracle at the 34th Precinct
Dec. 16 – ‘Tis the Season to be Smurfy »