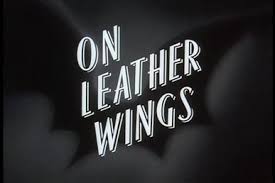 The series features great title cards for each episode. I like the simplicity of this one quite a bit.

On this day 25 years ago, Batman returned to television with a show simply titled Batman. Almost immediately, the show came to be recognized as Batman:  The Animated Series and is even referred as such on the DVD volumes released much later. When it premiered, Batman was riding high on a new wave of popularity thanks to two Tim Burton directed features:  Batman and Batman Returns. Batman had returned to his more brooding roots and away from the camp of the television series from the 60s starring Adam West (RIP). And while the Batman of this new show would more closely align himself with Michael Keaton’s portrayal than what was featured on various incarnations of The Super Friends, it was still an animated show featured on Fox Kids that would appeal to a general audience.

Before Christopher Nolan came along, the Batman of this cartoon series (voiced by Kevin Conroy) was often cited as the preferred Batman above all others to escape the comic books. And for a great many fans, it still is. Batman:  The Animated Series tackled mature stories and treated its legendary hero with respect. Primarily the work of Bruce Timm and Paul Dini, it has become a landmark for animated television and is often considered the best comic-book adaptation to ever grace a television set. 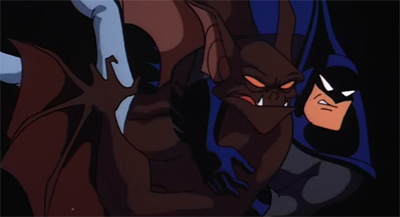 In the series’ first episode, Batman tackles an unfamiliar foe to most of the audience.

To celebrate 25 years of Batman:  The Animated Series, I’m going to take a trip through each episode in short write-up reviews. The posts will be in production order, so even though the series premiered with “The Cat and the Claw Part 1,” the first post is for “On Leather Wings,” which was the second episode to debut. The air dates are all over the place, as Batman’s first season was a 65 episode order designed to immediately qualify it for syndication. It was successful enough that more episodes were ordered (these are The New Adventures of Batman & Robin) and WB would order a third and final season many years later (The New Batman Adventures) to pair with their Superman animated series. I intend to get to all of them, including The New Adventures, though I have no idea how long it will take me. Hopefully I can refrain from typing 2000 words about each episode in order to move along at a decent pace.

With that out of the way, let’s talk about the first production episode “On Leather Wings.” This is a natural for the first episode because it’s a Batman solo adventure and does not feature a noteworthy villain who will hog the spotlight. This show very much follows a villain of the week/day type of format. There’s very little continuity from episode to episode and few callbacks, especially in the first season. This particularl episode was directed by Kevin Altieri and written by Mitch Brian. It’s sort of a surprise that Dini and Timm aren’t directly credited with the first episode, but since 65 were done at once I suppose it doesn’t matter much which is first. That and they also likely had a hand in just about every episode from some point in the development. Altieri will direct several episodes in this first season. Brian is credited as a co-creator on the show, though he only shows up a couple more times as a story writer. 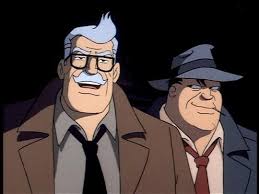 Commissioner Gordon and Detective Bullock, who will make many appearances in this show.

“On Leather Wings” feels like an introduction for Batman as the plot involves people confusing the villain with him and attributing his crimes to Batman. That villain is Man-Bat, a B-level villain who’s essentially a were-bat, if you will. The story calls on Batman to use his detective work to figure out who is the man behind the Man-Bat, essentially. Batman’s sleuthing skills take him to a bat exhibit in Gotham Zoo where he meets the irritable Dr. March. March, who seems to prefer bats to humans, is our episode’s red-herring though he’s clearly hiding something. Bruce also encounters March’s daughter and son-in-law, who have followed in his footsteps as bat experts. 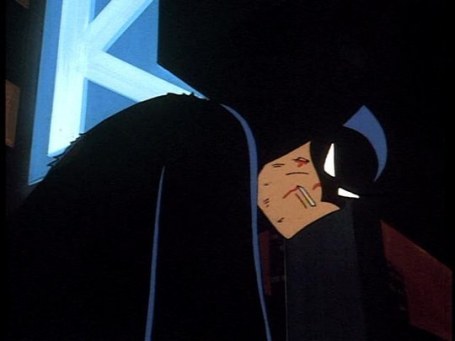 Fox was pretty good about letting the show depict some blood as well as guns and general, tasteful, violence.

Having Batman investigate a bat monster is a fun way to debut the series. We also get introduced to series mainstays Commissioner Gordon (Bob Hastings) and Detective Bullock (Robert Costanzo), and we also get a glimpse of Bullock’s distrust of Batman which will be an ongoing thing. Trusty butler Alfred is also debuted, though oddly enough voiced by Clive Revill. He will be voiced by Efram Zimbalist Jr. for all but three of Alfred’s appearances. The episode is also a nice exhibit of the show’s unique look. We get to see the Gotham skyline at night, done on black backgrounds and Batman and the Man-Bat pop nicely against it. The Batcave is also featured and we get to see Batman’s super-powered computer in action which will help him solve many mysteries through-out the series. It’s a tight little plot, which is resolved by the end in a mostly satisfying manner, though Batman seems very trusting of the bat experts to make sure this never happens again (spoiler alert – it does!) and declines bringing them to the police. In short, it’s a good episode though probably no one’s favorite. The production values are quite nice (we get some nice sound effects in particular for Man-Bat) and consistent through-out. Episodes both better and worse are still to come.

Like what you just read? Check back here every Friday, starting this Friday, for another episode recap of Batman:  The Animated Series. If you want to follow along we’re going in production order which just so happens to be how the DVDs are arranged. Individual sets can be had fairly cheaply these days, and there’s a complete collection for those with finer taste. All of the episodes are also currently airing on Amazon Prime so if you have a subscription you can watch there. I hope you enjoy reliving this series as much as I plan to enjoy writing about it.

This entry was posted on Tuesday, September 5th, 2017 at 2:42 pm and tagged with batman, bruce timm, kevin altieri, kevin conroy, man-bat, mitch brian, paul dini and posted in batman the animated series, Comics, Television. You can follow any responses to this entry through the RSS 2.0 feed.
« Mickey Mouse Season One
Do We Really Want a Nintendo 64 Classic? »

One response to “Batman: The Animated Series – “On Leather Wings””