Disney gets the Lego Treatment 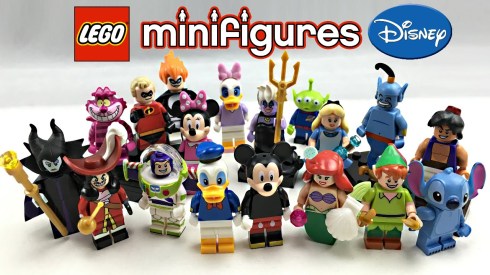 Lego is one of the most popular toy manufacturers on the planet. They’ve become known for their building block style toys that come in various shapes, sizes, and colors and can be combined to form castles, pirate ships, space crafts, and other fantastic designs. They also have struck gold with their mini figures, simplistic action figures that embody the Lego design and make great pilots, captains, and heroes to pair with the various sets. It used to be you had to buy a construction set to get a figure or two, but for several years now Lego has capitalized on the appeal of its mini figures by releasing them individually in blind bag assortments. Even more recently, Lego has decided to apply a popular license for these blind bag releases. For the past two years, that license was The Simpsons. I was rather fond of this decision and really it got me back into Lego after not buying a set since I was a kid. The Simpsons I feel still had legs and a series three would have been welcomed by me, but Lego has apparently killed that line and decided to go with a new license:  Disney.

Theming a line of figures on the Disney license is almost as broad as creating a line of “People” figures. The Walt Disney Company has been putting out animated and live action films for nearly a century. The company has its own television station full of original programming, plus it owns Pixar, Marvel, Star Wars, and ABC to name a few. And since Lego already makes Star Wars and Marvel sets, it stands to reason that their Disney themed wave of mini figures could include those franchises if it wanted to. What it really means for Lego is that its first wave of Disney mini figures is an amalgamation of a few popular Disney properties. The first set of 18 Disney figures contains popular Disney creations like Mickey Mouse and Donald, characters from classic animated films like Aladdin and Peter Pan, and also a few Pixar figures to round things out. There are likely fans out there who would have preferred it if Lego stuck to the classic animated films, or maybe even just the Mickey and friends line, but Lego opted to try to please a wide consumer base.

A motley crew of Disney plastic.

As someone who likes Disney and is married to a woman who LOVES Disney, it meant i had to collect this line with the same vigor as I did with The Simpsons. The wave hit retail on May 1st, though a few lucky individuals probably found them earlier. Like other mini figure waves, this series is released in blind bags so the consumer doesn’t know what they’re buying, unless they’re willing to sit and prod at each bag to feel the figure out. As Lego did with The Simpsons, they’ve chosen to make custom head sculpts for a lot of the Disney characters, basically all of the non-humanoid ones. That means finding Mickey and Minnie when groping a plastic bag is actually pretty easy, same for Sticth as well as the ducks, Donald and Daisy. I actually found the entire wave pretty easy to feel out and went a perfect 18 for 18 with my purchases. Now, if only I had better luck at finding the figures at big box retailers. Stores like Target and Toys R Us sell each figure for 3.99 a piece, but I got stuck hitting up specialty shops that charged 6.99. The things I do for love.

Unlike The Simpsons, these Disney figures are not released alongside any standard Lego sets, which is a bummer. Lego does have a line of Disney centric Lego Friends sets which focus on the various princess characters. The Friends line is Lego’s girl line, because apparently girls can’t handle traditional mini figures and bricks, and it’s clear Lego avoided duplicating characters it had already released as part of that line. The set of 18 is mostly free of the princess characters, with the exception of a mermaid Ariel. Alice from Alice in Wonderland is also included, but I don’t think she’s ever been considered a “princess.” From the Mickey and Friends collection, we have Mickey, Minnie, Donald and Daisy. Any Disney fan immediately sees that list and says “Where’s Goofy?!” He’s missing in action here. The four who are included look pretty good though. Donald and Daisy even have a little duck “butt” piece which is pretty funny but also pragmatic. Mickey is kind of dull though as he comes with no unique pieces or accessories. He doesn’t even have a tail! That’s a problem I’ll address later as it’s a recurring problem. Not the tail, but the lack of accessories to go along with these figures.

Ursula’s got it going on.

From the Disney animated classics group of films, there’s the following:  Alice, Cheshire Cat, Maleficent, Peter Pan, Captain Hook, Stitch, Ursula, Ariel, Aladdin, and the Genie. All are done fairly well, though characters like Aladdin and Pan suffer from being a bit too conventional and kind of boring in appearance. Genie suffers a little in that he’s fairly unique, but the efforts made to convey that don’t work so well. Instead of getting a more unique sculpt, he’s actually a standard mini figure with add-on pieces to round out his look. He does have a “ghost” lower body which is kind of neat, but he still doesn’t really look all that much like the Genie from Aladdin. Plus Lego got really cheap with his gold cuffs and only painted half of his wrist. Maleficent is unique in that she doesn’t have legs, but a triangular block for a base to simulate her robes. It works pretty well as a visual, though it’s probably not fun for kids to play with. Ursula is definitely the cream of the crop as she gets a uniquely sculpted lower body that looks great. Ariel does as well, but her tail is rather blocky and unappealing to look at. I get that Lego is supposed to be blocky, but there’s just something off with Ariel’s look. 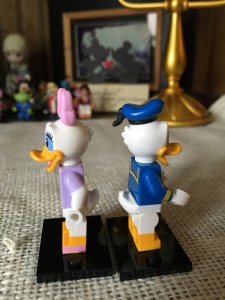 The piece Lego fanatics have been waiting years for:  duck butt.

Pixar is also featured, albeit in a minor way. There aren’t many Pixar characters that would work as Lego mini figures, but Lego did pick some suitable ones. From Toy Story, there’s Buzz Lightyear and the Alien, and from The Incredibles we have Mr. Incredible and his foe Syndrome. Buzz is the star of the four. While he doesn’t quite look like the Buzz we know and love, the unique pieces included give him a lot of personality. The Alien gets a unique head sculpt and looks fine, while Mr. Incredible and Syndrome look about as good as they can, though they’re a little boring. I don’t dislike any of the four, and actually really like Buzz, but I am left wishing Lego had stuck with more conventional Disney properties and gave Pixar its own wave.

With any release like this, it’s easy to zero in on what’s missing. Properties like Pinnochio, Snow White, and The Lion King are synonymous with Disney but not represented here. There’s also a lack of quality accessories that’s kind of disappointing. Mickey comes with none, when he should come with Pluto. He could have come with some clothing type accessories like his sorcerer’s hat, something which is better than nothing. Ursula comes with King Triton’s trident but not his crown, and Ariel comes with an oyster shell with a pink jewel in it. Maybe I need to watch The Little Mermaid again because I don’t remember that amongst her many treasures. I’d rather she come with a fork, I mean, dinglehopper, though a Flounder would have been better. Stitch, Cheshire Cat, and the Alien all come with no accessories, and Aladdin and the Genie both come with the same lamp. Couldn’t Aladdin at least have come with a black Jafar’s lamp? These figures aren’t really all that cheap, the least Lego could do is make sure each character has at least one appropriate accessory to round them out.

Pan looks kind of bloodthirsty, not that Hook looks like any less of a maniac.

Criticisms aside, I do think this is a pretty solid wave of mini figures and a nice start for the Disney line. I assume there will at least be a wave two and I’m hopeful Lego will explore some Disney sets, especially if they’re based on Disney World or Disneyland. As far as a potential wave 2 is concerned, I would assume some characters are no-brainers. Goofy, Woody, and Jessie seem like locks. Near locks would include Mrs. Incredible, Frozone, and Jafar. If Lego really wants to stick with the films its already touched upon, then characters like King Triton and the Queen of Hearts certainly have a shot as well. I’m hopeful that Pinnochio and Jiminy Cricket get a look, and a Beast and Gaston would be pretty awesome. It’ll probably be nearly a year before we know what’s to come, but until then it will be fun to speculate.

UPDATE:  Well it took Lego a few months to unveil it, they did indeed confirm a Lego version of Disney World’s iconic Cinderella Castle is coming this September. It will retail for $350 (ouch!) and total over 4,000 pieces and come bundled with 5 mini figures. Making her traditional Lego debut will be Tinker Belle and she’s joined by a tuxedo-clad Mickey, a red polka-dot version of Minnie, a pink version of Daisy, and Donald, who appears to be identical to his previously released figure. It looks pretty slick, and it’s hard to argue with the character choices. The castle interior looks like it will be full of easter eggs, and possibly hints for future mini figures, and the only initial piece of criticism I could offer is the depth of the castle looks shallow. It likely would have benefitted from a hinged design to make the base at least appear bigger. Aside from that, it’s a nice piece of eye candy and something I’m going to have to buy for my Disney-obsessed wife.

This entry was posted on Friday, May 13th, 2016 at 3:50 pm and tagged with aladdin, alice in wonderland, disney, donald duck, lego, mickey mouse, peter pan, pixar, the incredibles, the little mermaid, toy story, toys and posted in Film, Television, toys. You can follow any responses to this entry through the RSS 2.0 feed.
« Persona 4: The Animation
The Complicated Legacy of Sonic the Hedgehog »

5 responses to “Disney gets the Lego Treatment”