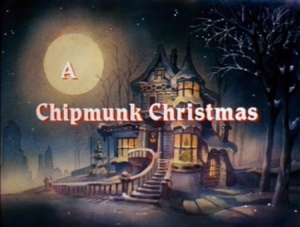 Few properties have managed to return from obscurity like The Chipmunks. They originated in song with “The Witch Doctor” and ended up getting an animated television show. That show faded and their popularity waned, but was resurrected in 1981 with A Chipmunk Christmas which celebrated their popular Christmas song “The Chipmunk Song (Christmas Don’t Be Late).” The success of the special lead to a new animated series called Alvin and The Chipmunks and a string of direct to video films. Now the Chipmunks are back as a film property after a long absence and they even have a new TV show. They’re not exactly well received by critics, but kids seem to love them again.

The quality of these various shows and films has never exactly been the best, but the original Alvin Show has some genuine humor which A Chipmunk Christmas gets right. What the Christmas special does better though is add a little heart. The story goes that Dave, the Chipmunks’ guardian and manager, is getting his boys geared up to play a Christmas Eve concert while the boys are more interested in just being boys. That is until Alvin finds out about a little boy Tommy who’s very sick and also a big fan of The Chipmunks. What Tommy wants more than anything for Christmas is a golden Echo harmonica, which Alvin so happens to be in possession of. He sneaks away from a recording session to give Tommy the harmonica, under the guise of saying Tommy won a contest, but Alvin is afraid Dave will be mad at him when finds out he gave away his harmonica. Especially once it’s reveled that Alvin is expected to play it as part of their Christmas Eve show. 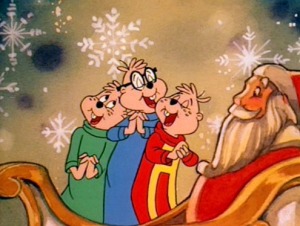 The Chipmunks received a slight redesign for their special, which would be further modified for the TV show Alvin and The Chipmunks.

This is one of those stories where the audience is naturally frustrated because the protagonist has done the right thing but is misunderstood. Alvin becomes consumed with making enough money to buy a new harmonica so Dave won’t know he gave away the original, but Dave just sees Alvin’s schemes from the outside as Alvin being selfish. Since this is a Christmas special, Alvin does eventually find a way out of his predicament when an old woman (voiced by the immortal June Foray, who pops up a lot in Christmas specials) offers to buy him a new harmonica for helping her out. The special culminates with the concert, and the ending has a nice little surprise for the viewer which might be my favorite ending of any Christmas special.

The Chipmunks may have seen their popularity seesaw over the years, but their Christmas special has remained timeless. With their renewed popularity, A Chipmunk Christmas has returned to television after a lengthy absence, though I never came across it this year. The special is widely available on DVD and Blu Ray and can be streamed online for free. This one is a classic that hits all of the right notes by being funny, charming, and has a great Christmas message. Don’t hold those new movies against it.

This entry was posted on Wednesday, December 23rd, 2015 at 12:00 am and tagged with alvin, christmas specials, dave seville, june foray, ross bagdasarian, simon, theodore and posted in Best of Christmas - TV, Television. You can follow any responses to this entry through the RSS 2.0 feed.
« #4 – A Charlie Brown Christmas
#2 – Mickey’s Christmas Carol »