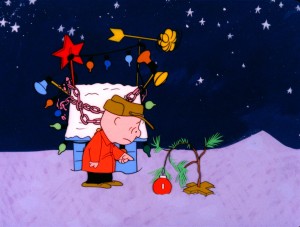 Old Chuck has been around for awhile now. No one can say his special has failed to stand the test of time. And even so, the origins of A Charlie Brown Christmas are pretty humble ones. Few expected it to be a success, especially after creator Charles Schulz wanted Linus to recite a passage from The Bible on the meaning of Christmas. The production values were low, and basically every voice actor was an amateur, and a kid.

Despite all of that, A Charlie Brown Christmas has been a monumental success. It has lead to numerous other Peanuts themed holiday specials and television shows. It’s soundtrack has been a best seller and its main theme “Linus and Lucy,” composed by Vince Guaraldi, has become the official theme of the Peanuts brand. 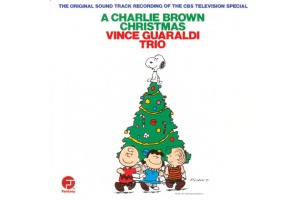 The soundtrack for A Charlie Brown Christmas is almost as famous as the actual special.

The story goes, Charlie Brown is depressed around the holidays because he doesn’t really understand what’s so great about Christmas. Part of that is derived from the rampant commercialism surrounding him and also by the fact that no one seems to like him. Lucy, in a rare moment of compassion, decides to offer Charlie Brown the position of director for their Christmas play. She seems to think the play will direct itself and Chuck couldn’t possibly screw it up. When Charlie Brown arrives at the auditorium he finds everyone is only interested in dancing around and few are serious about putting on the play. Frustrated, he decides to get a tree which just makes things worse, prompting Linus’s famous speech.

Amongst the specials on this countdown, A Charlie Brown Christmas is easily the most secular. It does so without turning off the unreligious, with the biblical meaning of Christmas serving as a reminder that the holiday isn’t all about getting presents and seeing who has the most lights on their house.  Still, I’m sure the devout Christians out there probably appreciate what A Charlie Brown Christmas has to say since most specials ignore that Jesus fellow.

Now obviously the special has become a bit of an ironic one. The primary message of A Charlie Brown Christmas is that commercialism has distorted the holiday’s message, and yet today, few properties have become more commercialized than Charlie Brown. Especially this year when the special celebrates its 50th year. None of this causes the actual special to be any less charming, and I certainly don’t mind the abundance of Charlie Brown merchandise as it’s an easy fail-safe when shopping for Christmas gifts.

As one of the most popular Christmas specials, A Charlie Brown Christmas is featured prominently on television and is also available on DVD and Blu Ray. It was shown this year along with a one hour special celebrating its 50th anniversary. If you missed that broadcast it will be shown again on Christmas Eve on ABC.

This entry was posted on Tuesday, December 22nd, 2015 at 12:00 am and tagged with charles schulz, charlie brown, christmas specials, linus, lucy, peanuts, snoopy, vince guaraldi and posted in Best of Christmas - TV, Television. You can follow any responses to this entry through the RSS 2.0 feed.
« #5 – Mickey Mouse: Pluto’s Christmas Tree
#3 – A Chipmunk Christmas »

One response to “#4 – A Charlie Brown Christmas”