For the number seven entry I am cheating a little, but only a little. I spelled it out in the intro to this feature, but I am considering theatrical shorts for this feature as long as they’ve basically been adopted by television. “Toy Tinkers” starring Donald Duck falls under that umbrella as it debuted in theaters in 1949. “Toy Tinkers” came during a time when Walt Disney was moving away from the short subject to focus on feature length films and television productions. Pretty much the only character still receiving shorts was Donald Duck, who had usurped Mickey Mouse’s role as lead character for cartoons. Mickey would receive short films here and there into the fifties, but Donald was the only one receiving consistent work.

“Toy Tinkers” is very similar to a later cartoon, “Pluto’s Christmas Tree,” because both feature Chip and Dale. In this cartoon, Chip and Dale sneak into Donald’s house after seeing him chop down a Christmas tree. When they get in they decide to stay due to its warmth and abundance of nuts. Donald, not being the friendliest duck, sees the duo and decides to have some fun at their expense. He even ends up pulling a gun on them after disguising himself as Santa Claus. Chip and Dale, of course, do not take this laying down and opt to fight back. They’ve had a few battles with Donald over the years, and just like in virtually every other one, they get the better of the duck after turning his living room into a war zone. 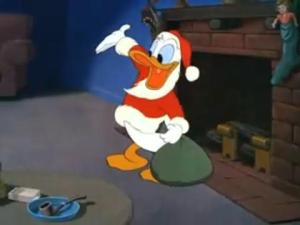 “Toy Tinkers,” as the name implies, features lots of toys and gags centered around them. The tamest moments of the short feature Chip and Dale interacting with these toys in an innocent and curious way. The toys also play a vital role to the combat sequences that follow where pop guns, trains, and wind-up cars are put to use. It’s a clever little short that’s plenty charming. It doesn’t really feature much Christmas spirit, but makes up for it with its use of timeless characters. Seriously, if you can’t enjoy a Donald Duck cartoon then we can’t be friends.

“Toy Tinkers” can be found on the Chronological Donald Volume 3, a collection of Donald Duck cartoons that is long since out of print and mighty expensive on the resale market. There is a holiday DVD from about ten years ago that included it which is much easier on the wallet, “Holiday Celebration with Mickey and Pals,” if you wish to seek it out. The Disney Channel will sometimes slip it into its programming during December as well, especially if they need to fill some small gaps in programming, but you’ll have to keep your eyes peeled to find it. If you wish to make it easy on yourself, pretty much every old Disney short can be found on Youtube. Since the company isn’t actively trying to sell them, they must not care about their availability online.

This entry was posted on Saturday, December 19th, 2015 at 12:00 am and tagged with Chip and Dale, christmas cartoons, christmas specials, donald duck, jack hannah, mickey mouse, walt disney and posted in Best of Christmas - TV, Television. You can follow any responses to this entry through the RSS 2.0 feed.
« #8 – South Park: Mr. Hanky, The Christmas Poo
#6 – The Simpsons: Simpsons Roasting on an Open Fire »