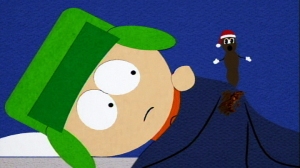 You can always count on South Park for something perverse, and it doesn’t get much more perverse than a talking piece of Christmas shit. South Park has made quite a few holiday specials, and no holiday has received more attention than Christmas. South Park’s Christmas specials contain some of the usual suspects like Jesus and Santa Claus, but creators Matt Stone and Trey Parker apparently felt they needed their own Christmas mascot so they created Mr. Hankey, the Christmas Poo.

Mr. Hankey is the star of the show’s very first Christmas special which aired during the first season. Mr. Hankey is presented as a benevolent spirit of the holidays who packs more Christmas cheer into his tiny, little body than any man, woman, or child. Mr. Hankey is the star of the episode, but the plot centers around Kyle who feels left out at Christmas because he’s apparently the only Jewish kid in town. His mother flips out at Mr. Garrison for casting Kyle as Joseph in the school Christmas pageant which snowballs on Garrison as everyone apparently has a problem with some aspect of Christmas. The Jews want to ditch the nativity, the Christians want Santa out, the hippies want to stop the slaughter of trees, and so on.

Mr. Hankey in Mr. Mackey’s coffee is probably the best gag in the entire episode, or worst, depending on your point of view.

Meanwhile, Kyle views Mr. Hankey as the solution to the town’s problem because he brings presents to all good girls and boys (so long as they eat their fiber), regardless of religion. It’s just that few in town are willing to embrace a piece of crap as a new Christmas mascot. Kyle starts seeing Mr. Hankey everywhere as a personified dookie with a Santa hat, which leads to some disgusting but hilarious gags, while everyone else just sees a regular old mookie-stink. Kyle ends up getting committed, only for the kids to find out Chef believes in Mr. Hankey, and the special actually wraps up in a pretty typical Christmas special sort of way, when you ignore the talking poop.

It’s funny, it’s ridiculous, but South Park actually does a pretty nice job of highlighting how non-Christian kids must feel at Christmas time. There’s a heart here, which is part of the humor as Parker and Stone prove to the viewer that we too can love a piece of poo. “Mr. Hankey, The Christmas Poo” can be found on the season one box set of South Park and also the “Christmas Time in South Park” DVD, which I reviewed previously. The special, along with every other South Park Christmas special, is almost certainly guaranteed to air on Comedy Central this year so check your local listings if you want to catch it. And lastly, every episode of South Park is available to stream on hulu if you want to watch it that way.

This entry was posted on Friday, December 18th, 2015 at 12:00 am and tagged with cartman, christmas specials, comedy central, kenny, kyle, matt stone, mr. hankey, stan, trey parker and posted in Best of Christmas - TV, Television. You can follow any responses to this entry through the RSS 2.0 feed.
« #9 – A Flintstone Christmas
#7 – Donald Duck: Toy Tinkers »