Frosty the Snowman is a Christmas special that everybody knows. It’s been airing on CBS every year since 1969 and will likely continue to do so for as long as there’s a Christmas. Starring comedian Jackie Vernon as the voice of the titular snowman, Frosty the Snowman is the rare Rankin/Bass production done in traditional animation as opposed to stop-motion and is based on the song of the same name.

Because the special is so well-known, there’s not a lot that can be said about it that hasn’t been said before. I could strike a more snarky tone and point out that, for some reason, a bunch of the children at the beginning are wearing shorts in the winter time. And what is going on with the voice of that kid in the gray sweater with the bowl cut? It’s almost as if they didn’t want to hire another voice actor so they just made some weird sound effect. Maybe he’s a robot? It’s also easy to question the wisdom of the kind-hearted Karen who opts to climb into a giant refrigerator when she’s not even wearing pants. And why does Santa only have four reindeer? That one has bothered me for years. 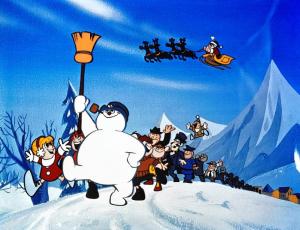 Only four reindeer for Santa? Was it too much of a financial burden to give him four more? Was food so scarce at the North Pole that Santa and Mrs. Claus had to butcher the other four for meat?

Yeah, there’s some weird stuff in this one but there’s also some genuine humor. Frosty being rather dim is funny and a surprisingly logical move for a children’s program. It’s also incredibly quotable with lines sticking with me through the years such as “No money, no ticket!” and “We evil magicians have to make a living too.” Frosty may be the star, but I do think Professor Hinkle is the MVP. He’s easy to dislike, just inept enough to stay one step behind, and a constant source of humor. He has that truly wicked moment during the special’s climax as well that adds legitimacy to his character. Really, how often do we actually see the villains in these various Christmas specials do something truly evil?

For a Rankin/Bass production, this cast is pretty star-studded. I already mentioned Vernon but they also opened up the checkbook for comedian Jimmy Durante who serves as the special’s narrator. The first lady of voice overs, June Foray, lends her voice to Karen. Billy De Wolfe voices Hinkle and Paul Frees has a small role as the traffic cop. Woven throughout the special is, of course, the song “Frosty the Snowman” and they actually do a pretty good job bringing the song to life without it feeling forced (though I suppose striking up a random parade is a little odd) or overplaying it. There’s also the emotional pay-off towards the end that gives the special an added punch.

Frosty the Snowman is a nice little Christmas special that virtually everyone knows. It gets enough right for it to earn a spot on pretty much every list of this type. The only thing that really holds it back for me is that it is a little corny and a little dated. There’s probably some exhaustion bias at work here too since I’ve just seen it so many times. Still, I don’t think being the 15th best Christmas special, considering just how many there are, is anything to be ashamed of. And it’s also ten times better than any of the sequels and spin-offs that have been made after this special.

This entry was posted on Friday, December 11th, 2015 at 12:00 am and tagged with cbs, christmas specials, frosty, jackie vernon, jimmy durante, june foray, rankin/bass and posted in Best of Christmas - TV, Television. You can follow any responses to this entry through the RSS 2.0 feed.
« #16 – Yes, Virginia
#14 – A Very Special Family Guy Freakin’ Christmas »