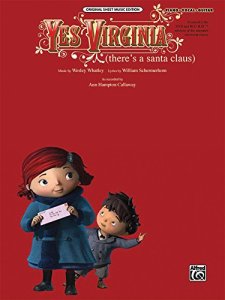 Yes, Virginia has the unique distinction of being based on a true story. The story dates back to a newspaper editorial from 1897 (!) that was titled “Yes, Virginia, there is a Santa Claus!” The story goes, that a young girl named Virginia asked her father if there really was a Santa Claus and his response was to tell her to write a letter to The Sun, a local newspaper in New York, telling her if it’s in The Sun then it must be true. It’s an enduring tale that has been adapted numerous times into musicals, specials, and films and is often recounted in some fashion every year.

This post is about the 2009 special promoted by Macy’s. It’s a tidy little story that stays true to the source in terms of the big picture, but there’s of course little dramatic bits added in to up the entertainment factor. Virginia has a little friend named Ollie who’s probably too adorable for his own good. Virginia also encounters bullies who want to convince her there is no such thing as Santa and a bell-waving Santa who tells her the exact opposite. The editor of The Sun is also a featured character who is at first reluctant to print Virginia’s letter. It’s this character who needs to come around and find the Christmas spirit in order for our special to be complete. 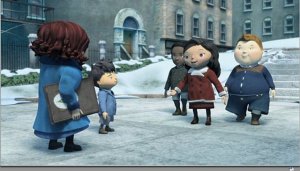 What it lack in visuals it makes up for in heart.

It’s impossible to engage the story of Yes, Virginia and not feel good about it. It’s a wonderful story and a piece of American history that should have no issues making kids and adults feel some holiday cheer. The only downside to the special is the animation, which was likely done on the cheap. Yes, Virginia is computer animated and some of the characters and sets are borderline ugly. It doesn’t animate particularly well, and the voice cast and music are nothing remarkable either. This is a special that is entirely dependent upon the story it is telling, and the characters in the lead role, are likable and easy to get behind.

Being that Yes, Virginia is only six years old, it’s still routinely shown on television each year. It’s also a free streaming option if you’re an Amazon Prime member, and if you’re not, it can be rented through the website for a small fee. It’s also readily available on DVD and well worth the small investment if you haven’t seen it.

This entry was posted on Thursday, December 10th, 2015 at 12:00 am and tagged with christmas specials, ollie, the new york sun, virginia and posted in Best of Christmas - TV, Television. You can follow any responses to this entry through the RSS 2.0 feed.
« #17 – A Muppet Family Christmas
#15 – Frosty the Snowman »