Of all the mainstream arts, television is the one that has seen the biggest advancement in terms of relevance over the past fifteen years. It used to be that TV was nothing more than the idiot box, a thing to rot our brains with. It was the home of the sitcom, a mostly safe way to kill 25 minutes on a weeknight, or daytime soap operas with outlandish and never-ending plotlines. Even the more celebrated dramas often had a “play it safe” mentality designed to entertain for a single episode before putting everything back in place for next week. There wasn’t much going on that seemed worthy of the term “art,” and an actor jumping ship from Hollywood to the small screen was seen as an admission of failure on said actor’s part.

Things are different now and some of the best stories, acting, and directing are occurring on television. Most of this is attributed to premium cable network HBO and their series The Sopranos and The Wire often cited as the two most influential. Basic cable has jumped in on the fun over the past eight years or so with much celebrated hits like The Walking Dead, The Americans, and of course, Breaking Bad. The main networks are still mostly home to popcorn fair but they’re slowly catching on to the changing television landscape.

Before all of these shows were breaking the mold, there was Cowboy Bebop. Cowboy Bebop is an example of strong story-telling with great character development that refused to be a slave to the popular TV tropes. The fact that it was coming out of Japan likely had something to do with it because Cowboy Bebop would never have existed as-is if it were American made. Just imagine a hugely successful show voluntarily ending after just one season of twenty-six episodes (a film would later be released but there’s never been talk of a season two or spin-off that I’m aware of). Cowboy Bebop set out to tell a complete story, and that’s what it did. If there was a temptation to double-back on that and have a second season it was ignored and probably for the better.

From left to right: Ein, Ed, Spike, Jet, and Faye.

Cowboy Bebop is largely credited to director Shinichiro Watanabe, who presided over the twenty-six “sessions” that make up the series. Cowboy Bebop follows the crew of the Bebop, comprised of bounty hunters in the year 2071. In this setting earth has largely been abandoned by humanity due to asteroid activity. A large collection of people now live on Mars, but a lot of the solar system as we know it has been colonized. The Bebop is captained by Jet Black, a former cop with a cybernetic arm. His main running mate is Spike Spiegel who was formerly messed-up with a criminal syndicate but now hunts bad guys for coin. They’re a fairly unsuccessful duo when the series begins but they’re soon joined by Faye Valentine, a woman with no memory of her past and a huge debt to settle, and the sexually ambiguous child Edward, who speaks in the third person and is a computer whiz and hacker extraordinaire. Rounding out the group is a welsh corgi by the name of Ein, a dog with near-human intelligence. They’re mostly a motley crew and often their bounties get away or find a way to devalue themselves preventing the group from really cashing in. Most of their relationships are a bit strained with Spike and Jet often wondering how their duo came to be this group. Faye basically comes and goes at her leisure while Ed just seems to enjoy hanging out with the crew. The various dynamics work out well as they clash often but all seem to reluctantly accept one another’s help when needed. 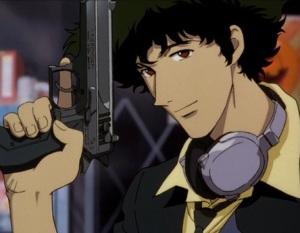 All of the characters are interesting and well-developed in their own right, but Spike is the show’s main character.

The animation for Cowboy Bebop is a sophisticated take on the standard anime style. The characters do not possess the exaggerated features of many anime programs but retain enough of the art form’s style to be considered anime. Characters tend to be long of limb. They look like they should animate in a stiff manner but they tend to have a certain flow about their movements. There’s a mixture of handrawn animation and CG with most of the CG reserved for the spaceships. Some episodes are visually dark, others bright. Some settings have an industrialized look to them, others are leafy and green, and some neon and futuristic. There’s a lot going on in the twenty-six sessions and the nomadic nature of the crew adds considerable variety in both story-telling and visuals.

Music is a big point of emphasis by Cowboy Bebop. In fact, each session title is a reference to either a song or style of music. There’s “Sympathy for the Devil,” “Bohemian Rhapsody,” and “Jupiter Jazz,” just to name a few. The music was done by Yoko Kanno and a better anime soundtrack you will not find. The opening title “Tank!” is a jazz-fusion track that has undoubtedly influenced several shows since like The Venture Brothers and Archer. The closing track for each episode, “The Real Folk Blues,” perfectly captures the show’s more melancholy moments. The show’s dub is also particularly impressive. Several of the names attached to it are well-known in the animation community such as Steve Blum (Spike), Wendee Lee (Faye), and Beau Billingslea (Jet).

By far though, the best thing going for Cowboy Bebop is its story-telling. The show slowly peels back the layers of each character throughout the series. At first, Spike comes across as a reckless cowboy who cares only about collecting his bounties. As the series moves along, we see he’s actually a good person at heart and when push comes to shove he usually opts to do the right thing. His story is what I would consider to be the main story. Some of his past, including his rivalry with current syndicate member Vicious, is revealed in the fifth episode “Ballad of Fallen Angels.” More is then revealed in the two-part “Jupiter Jazz” which is essentially the midpoint for the series before wrapping with the two part finale, “The Real Folk Blues.” His story is compelling often alternating between exciting and sad. Faye also has a window to her past opened as the series moves along and hers is just as captivating and arguably more tragic. The episode most centered around her, “Hard Luck Woman,” is one the show’s more satisfying. Jet and Edward are also examined and each has difficult choices to make. We learn a lot about these characters and it’s painful saying goodbye after just twenty-six episodes, but that’s part of the show’s lasting impact. 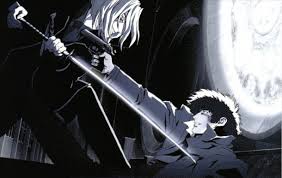 The Spike/Vicious rivalry is one of the show’s main conflicts, but it’s never overplayed.

Interspersed amongst the episodes are one-off palate cleaners, if you would. These episodes take on the form of a “bounty of the week” and we get to see the Bebop crew in action. Some are laden with humor such as the psychedelic “Mushroom Samba” while others are dark and violent, like “Pierrot le Fou.” Even though these episodes are lighter in content, they still offer moments for the characters to deepen our understanding of them or make use of creative story-telling devices, like the Alien inspired “Toys in the Attic.” Truly, there are episodes more likely to be cited as favorites but there is no bad episode among the twenty-six.

Cowboy Bebop nails it at pretty much every level. It’s visually engaging, aurally amazing, and its story-telling was ahead of its time. If the show had a smell or taste attached to it I’m sure they too would have been excellent. It’s rather unique among the other shows on this list, most of which are either comedies or children’s shows. Cowboy Bebop will make you laugh, but it’s definitely not a comedy and its mature subject matter puts it squarely in the adult zone. It’s really one the greatest shows made for television and one of Japan’s finest exports. Thirteen hundred words can not do it justice.

This entry was posted on Sunday, November 1st, 2015 at 9:52 am and tagged with anime, shinichiro watanabe, spike spiegel, steve blum, yoko kanno and posted in Best of Animation - TV, Television. You can follow any responses to this entry through the RSS 2.0 feed.
« The Tale of the Princess Kaguya
#1 Best in TV Animation: The Simpsons »

One response to “#2 Best in TV Animation: Cowboy Bebop”