#1 Best in TV Animation: The Simpsons

Could it really be another? There have been funnier shows, better looking ones, and shows with better stories to tell, but it’s hard to argue against the show that made prime time animation a thing and has lasted over 25 years. The Simpsons are an American institution at this point. There are people in their twenties who have never had a year of their life pass by without a new season of The Simpsons. That’s pretty incredible. And say what you will about the quality of the show in recent times, there’s still a large body of work that’s among television’s best.

Let me actually start with the argument against The Simpsons being number one. Really, that argument boils down to the show not being very good for the last ten or fifteen years. You’ll be hard-pressed to find a fan of the show willing to argue that the best is happening right now. The general consensus seems to be that the show’s peak was probably seasons two through seven. Seasons eight through twelve have their moments, and from there the show has been in a downward spiral of re-used plot devices and poor gags. After all, how many times have Homer and Marge split-up during an episode only to patch things up in the end? Or how often has Bart pulled some elaborate prank only to feel remorseful after the fact? For me, the best era of The Simpsons probably ended with the season nine premiere, “The City of New York vs Homer Simpson.” It was a promising start to what ended up being a mostly mediocre season. I’d argue though that The Simpsons ever since has mostly remained mediocre and has never produced a truly awful season. Though I concede one should feel fortunate if there’s at least one memorable episode per year that isn’t a Treehouse of Horror installment. 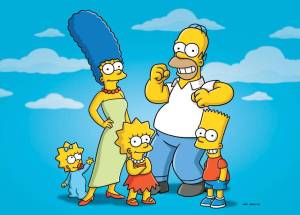 Even if I were to go so far as to say that The Simpsons has been bad since season nine, that’s still nearly two-hundred episodes of quality prior to that. Such an episode total dwarfs almost every other series on this list with the only comparable being South Park (which has had its own peaks and valleys over the years). When The Simpsons was operating at its best it was sharp, funny, satirical, but with enough heart to make viewers care about the characters. It operated as a pretty typical sitcom, but one willing to take advantage of the animation medium. Characters never had to age and the town of Springfield could be filled with hundreds of characters without the need to expand the cast.

What made The Simpsons a hit was its edgier brand of humor when compared with other sitcoms. The Simpson family was dysfunctional. Bart and Homer were always at odds with Homer being a rather poor example for the kids. They weren’t as hopeless as Fox’s other family, The Bundys, but they certainly weren’t The Waltons (much to the dismay of then President George H.W. Bush). Bart dominated the early episodes, often getting into trouble and just being a general delinquent. Overtime, Homer moved more and more into the spotlight as his I.Q. seemingly deteriorated more and more each season. Lisa and Marge have mostly served in a supporting role with each representing a foil for the male members of the family. Often once or twice per season one of the ladies would assume a starring role. The supporting cast became robust and episodes would even follow someone from Springfield with The Simpsons serving in a supporting role. It’s hard to pick a best character from outside the family because there are just too many to choose from. The miserly Mr. Burns is so good as the boss character/villain of the series (boss as in Homer’s boss, not video game boss, though he did serve in that role too). Krusty is well known as Springfield’s resident celebrity as is the cartoon duo Itchy and Scratchy. Moe, Barney, Troy McClure (voiced by the late, great, Phil Hartman), Ned Flanders, Principal Skinner, and on and on it goes. I doubt there’s ever been a larger cast in the history of television.

The cast is positively ginormous.

Every cartoon needs its own look, and visually, the series has always been distinct with its yellow skin-toned characters and circular eyes. Everyone sports three fingers and a thumb and wears the same clothes every day. The quality of the animation was a bit crude in the early going with some of the colors in the first season looking washed-out. As the series became a success, more and more money was tossed its way and the quality of the animation has steadily risen each year. In fact, that’s one thing the current episodes can boast over the classics: better animation. The show is often bright, but not distractingly so, with a lot of Springfield often appearing kind of run down. The main theme of the show was composed by Danny Elfman and is about as well-known as any other television theme. Shockingly, Fox has been able to keep the same vocal talent onboard over the years, though it hasn’t always been easy. There was a time when it appeared as if the rising costs of production due to raises for the cast would eventually kill the series, but now that seems unlikely. Everyone is past their career prime at this point and there’s less of a call for them to leave the show to pursue something else. They’re also all nearing or beyond retirement age and I imagine The Simpsons is a nice source of income they can rely on now. They’re also not stupid and know the show has gone past its peak so they’re unlikely to demand significant raises going forward, unless they collectively all decide they don’t really want to continue working on the show and demand Fox make them an offer they can’t refuse. It must be noted though that The Simpsons hasn’t avoided some tragedy over the years (it would be almost impossible for it to considering how long it’s been on) losing two popular talents. Phil Hartmen, who voiced many supporting roles, was murdered in 1998 while Marcia Wallace, voice of Bart’s hard-luck teacher Mrs. Krabappel, passed away in 2013. Both actors had their respective characters retired upon their death.

A neat graphic of the principal voice talent and the recurring characters they voice.

Just as it’s hard to pick a favorite character, it’s hard to pick a favorite episode or even season. The show was so good and so consistent in the early 90’s that it seemed to turn out a classic every week. “The Telltale Head” from season one is arguably the show’s first classic, along with the very first episode “Simpsons Roasting on an Open-Fire,” which is still the show’s best Christmas episode. “Bart the Daredevil” is another classic with an iconic moment even referenced in The Simpsons Movie. “Homer vs Lisa and the 8th Commandment,” “Bart the Murderer,” “Flaming Moe’s,” “Homer at the Bat,” “Marge vs The Monorail,” “I Love Lisa,” “The Last Temptation of Homer” and so many more. It truly is a daunting task to list the best of the best. Just coming up with a list of the best Halloween specials is hard (which The Simpsons must have a record for most Halloween episodes, easily)!

The Simpsons has been on television for so long that its legacy is likely going to be forever linked to its longevity. It has almost surpassed the show’s reputation for just being a damn good TV show. And how long will it go on? Who knows? The natural assumption would be 600 episodes, or maybe a 30th season, but it’s possible the show just goes on and on until someone too important decides to leave. It likely won’t go quietly as I imagine Fox would not allow the show to just end without making a big deal out of it, and they should. The show deserves as much. If it weren’t for The Simpsons it’s unclear what the landscape for adult cartoons would be. Sure, The Flintstones came first, but The Flintstones were not as nearly as impactful. While The Simpsons embraced the animated form, The Flintstones tried to be a typical sitcom that just happened to be animated. I may not watch The Simpsons on a weekly basis anymore, and really have not since the nineties ended. I still do not look forward to the day when The Simpsons has ended. It may no longer be the best show on television, but I still think the world is a better place with The Simpsons on at 8 PM every Sunday.

This entry was posted on Saturday, November 7th, 2015 at 11:38 am and tagged with al jean, animation, bart, fox television, homer, marge, married with children, matt groening, the flintstones and posted in Best of Animation - TV, Television. You can follow any responses to this entry through the RSS 2.0 feed.
« #2 Best in TV Animation: Cowboy Bebop
When Marnie Was There (film) »