The Tale of the Princess Kaguya 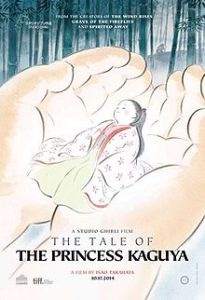 Hayao Miyazaki is the most celebrated director of Studio Ghibli, and one of the most celebrated directors of animation in the entire world. Lurking just behind him, however, is the immensely talented Isao Takahata. Takahata is the director of the delightful and underrated Pom Poko, as well as the heartbreaking and immensely affecting Grave of the Fireflies, one of the very best animated films of all time. When Miyazaki announced his retirement before the release of his final film, The Wind Rises, it reasoned to assume that Studio Ghibli would turn to Takahata to lead the company from the director’s chair. Apparently that is not to be, as the studio would end up announcing it was suspending development on all projects to revaluate its business strategy. Before that though, the company announced Takahata would be directing The Tale of the Princess Kaguya, giving the world at least one last Studio Ghibli film directed by the immensely talented director.

The Tale of the Princess Kaguya is an adaptation of an old Japanese folktale known as “The Tale of the Bamboo Cutter.” The general premise of the tale is that an old bamboo cutter finds a tiny girl inside a bamboo shoot who grows into a princess. In the film, the bamboo cutter is voiced by James Caan for the english adaptation, who finds the tiny woman in the bamboo shoot. Upon removing her she immediately becomes a baby and grows in size. He takes her home to his wife (voiced by Mary Steenburgen, making this the second time Caan and Steenburgen have portrayed a married couple, with Elf being the first) and they simply refer to the baby as Princess (Chloe-Grace Moretz). She soon starts growing rapidly and reaches her teenage years much faster than she had any right to. Her father decides she must be an actual princess, and upon returning to the forest where he found her to discover gold in the bamboo shoots, has the funds to make it happen. Princess, often referred to as Little Bamboo by her friends in the forest, would much rather live a peasant’s life among the trees but is reluctant to disobey her father. They move to the city where the princess is dubbed Kaguya and counseled in the ways of nobility. The meekness she is expected to take on does not suit her and she is best described as a fish out of water amongst the other noble folk. Her father is blind to this and pushes her to choose a suitor and marry a prince, but as the film progresses it becomes clear to the viewer that this is the path that will bring about the most unhappiness for the main character.

An ordinary bamboo cutter makes an unbelievable discovery in the forest.

The film does a good job of portraying the father as a well-meaning individual. It would be easy for the audience to turn on him completely given how miserable his actions make his daughter feel, but we can tell he truly believes he’s doing the right thing by forcing the noble lifestyle upon her. He views his daughter, as many fathers do, in a perfect light and wants only the best for her. He’s not acting out of any sense of selfishness. He’s not a gold-digging individual or in search of fame for his own name. Unfortunately, he is just completely blind to how he’s making his daughter feel and doesn’t realize he’s deprived her of the only thing she really wants. In this, the film is sort of an anti-princess movie in comparison to the old fairy tales popularized by Disney. For many of those, the lady in waiting yearns to be a princess and is forced to wait around for her prince to come save her and remove her from a life of poverty. Today’s movie-going audience values strength of character, especially from its female leads after years of weak ones, and in this Kaguya succeeds at crafting a modern princess tale.

The running scene, my pick for best visual sequence in the film.

Unfortunately, it isn’t successful in telling a truly compelling story. The character of the princess is the best thing going for it. She is easy to root for and also easy to empathize with. Aside from her, there are few other memorable characters. Her plight is so obvious and easy to grasp onto that the many scenes of the film that illustrate just how depressed she’s become are almost unneeded. The film is dreadfully slow and plodding (a bloated 137 minutes), so much so that I would be surprised if children would generally find it immersive. Often the time-consuming nature of animation production forces shorter runtimes upon directors. This can be frustrating for the truly captivating animated films out there, but at the same time, these limitations can also have a positive impact by forcing the director to focus on the story and the most important aspects of it. Such constraints apparently were not place on Takahata, but a persuasive voice in his ear would have benefitted this film tremendously.

Perhaps the reason for the film’s extended run time is the minimalist approach to animation it takes. The film adopts a sketchbook look thats low on color and detail. Sometimes backgrounds are dominated by emptiness with maybe a few shrubs or tall grass for the woodland scenes or simple textures in the village scenes. Whether you like it or not is a matter of taste, but I personally did not find it enjoyable to view. The only time I found the sketchbook visuals gave it a compelling look was during a scene where the princess is running through the countryside. There the undefined nature of the pencils imparts a sense of speed to the scene. Mostly though, the film looks messy or even bland. With the plot dragging and not every scene feeling important, the film has a hard time relying on the visuals to set the mood or carry a particular segment of the film. 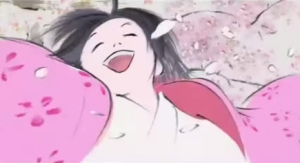 The princess, in one of her few moments of happiness in the film.

All of these short-comings lead me to the conclusion that The Tale of the Princess Kaguya would have made a better short film than a feature. The visuals, if only on screen for a short time, would not be allowed to overstay their welcome and the plot could be resolved in a more expedient fashion. I’m the type of person who often enjoys a long composition, be it book, film, or song, but I just felt this film was hard to sit through. It was not a joyful experience for me, and though I found the ultimate resolution of the film to be interesting and appropriate, by the time I happened upon it the characters had lost all of their goodwill with me. I just wasn’t entertained, which was really frustrating to me because of the track record of Takahata and Studio Ghibli. Thankfully, The Tale of the Princess Kaguya is just the penultimate film (for now) for Studio Ghibli, because it would be really unfortunate for it to go out on such a low note.

This entry was posted on Sunday, October 25th, 2015 at 6:39 pm and tagged with isao takahata, japanese animation, studio ghibli, the bamboo cutter and posted in Film. You can follow any responses to this entry through the RSS 2.0 feed.
« #3 Best in TV Animation: Futurama
#2 Best in TV Animation: Cowboy Bebop »

One response to “The Tale of the Princess Kaguya”