Revisiting The Simpsons as Lego

Last July, I made a post about 2014’s newest addition to the Lego family:  The Simpsons. Two of the world’s most popular brands teamed-up not just for a Lego-themed episode of the iconic television show, but also to bring several of the show’s many characters to life as little three inch plastic toys. The big addition was also the release of The Simpsons’ house in Lego form which covered the bulk of my post.

Well now it’s 2015, and if this Lego fan-blog can be believed, we’ve got a new round of Simpsons Lego merchandise to look forward to in the spring. And considering the snow is piled high outside my home right now, spring can’t come soon enough. I ended that post from last summer wondering about what was to come as it pertained to Lego and The Simpsons. There was the possibility that The Simpsons would be one and done, and had they been, it wouldn’t have been a slight. An entire wave of mini figures was devoted to the brand and The Simpsons house is positively massive by Lego standards. It’s questionable how well a brand that is mostly aimed at older individuals would sell as a toy, especially considering that the show is no longer as popular as it used to be. Truth be told, I have no idea if kids today watch The Simpsons as I did when I was young enough to be interested in Lego as a plaything. Still, I hoped we would see more from Lego concerning The Simpsons because there is so much left untouched as it stands now, and my Simpsons’ house could use some company.

Maggie doesn’t have many looks on the show, but this is her most popular aside from her traditional blue onesie.

Here’s how 2015 is currently looking: We’ve got another wave of mini-figures on the way and at least one more building set. The lineup for mini-figure wave two is quite appropriate given what came out last year and what would be expected of a second wave. First off, there’s a new version for each member of The Simpsons family. Collectors and fans of the show are probably disappointed by that as we already have two versions for each as it is, but anyone who has ever followed a toyline as a kid or adult knows this is par for the course. Just like every wave of Teenage Mutant Ninja Turtles action figures needs another version of each turtle, expect future waves of Simpsons figures to contain Homer, Bart, Lisa, Marge, and Maggie. I was kind of hoping maybe Lego would just include another Homer and Bart, given that they’re the two most popular, but oh well. At least we’re getting Bart as Bartman, a pretty popular version of the character, and while we don’t know what Lisa and Maggie will look like, both are being bundled with one of the family pets, Santa’s Little Helper and Snowball II, who really should have been included with the house last year. Homer and Marge are both in their “Sunday best” so I take that to mean Homer’s blue suit and Marge’s long, green dress that the duo often wear to church. It wouldn’t surprise me if Lisa and Maggie are similarly dressed, though I’m kind of hoping we get Maggie in her starfish-like snow suit.

The remaining supporting characters rumored to be a part of wave two are a mix of popular characters and those that pair well with other figures. Martin naturally fits in with Bart, Milhouse and the other kids while Smithers can finally be placed alongside Mr. Burns. Groundskeeper Willie and Comic Book Guy are fan favorites and it’s nice to see the retired Edna Krabappel included as well. Some notable omissions though are still present. It’s nice to have Edna, but it would be better if we had a Principal Skinner to pair her with. Milhouse as Fall Out Boy is likely included to pair with Bartman, even though it doesn’t make much sense from the perspective of the show and it just makes me want a Radioactive Man (Rainier Wolfcastle) as well. Dr. Hibbert and Professor Frink have been around awhile, so I’m not disappointed to see them included but I personally would prefer Lenny and Carl. There are images of a head mold for the infamous criminal Snake floating around the internet and he is noticeably absent from the list for wave two. My guess is he is being bundled with the Kwik-E-Mart set which will probably also contain another version of Apu, or better yet, Sanjay or Manjula. I’m curious if they’ll sneak another version of one of the Simpsons into the set as well, maybe a version of Homer as a Kwik-E-Mart clerk.

Which brings me to the second part of this post: what I want going forward! We know we’re getting a Kwik-E-Mart which is both logical and welcomed, but we don’t have confirmation for anything else. So here’s a small list of ways Lego could bring Springfield to life (as lifeless plastic):

That’s a pretty extreme reaction to Lego’s choice to bypass you, Moe.

1. Moe’s Tavern: Let’s get this one out of the way upfront. I want it. You want it. Anyone who has any interest in Lego versions of Springfield wants it, but isn’t going to get it. Lego has a pretty strict policy against alcohol and certain forms of violence, and a Lego version of Springfield’s most famous dive is probably out of the question. I’m hopeful that Lego could compromise and give us mini-figures of Moe and his number one patron, Barney, even if they’re in less memorable versions. Moe could be in his casual attire he sometimes wears on the show while Barney could be depicted as either the Plow King or as he was when he got sober. If Lego really wanted to give us Moe’s Tavern while saving face they could always do Moe’s Family Restaurant, which is just Moe’s Tavern from when he decided to try to be more like TGI Friday’s. It’s better than no Moe’s at all!

2. The Android’s Dungeon:  I mentioned this one last year, mostly because it just makes so much sense given the market Lego is courting with The Simpsons. The Android’s Dungeon is the infamous comic book shop run by Jeff, aka: Comic Book Guy. It played a prominent role in the Lego episode of the show and would be a natural set to include a Radioactive Man to pair with Fall Out Boy. Lego could also bundle it with Homer as Angry Dad when he came to resemble the Incredible Hulk or versions of Bart and Lisa from the Halloween special where they became superheroes. I’m actually surprised this set hasn’t already been announced. 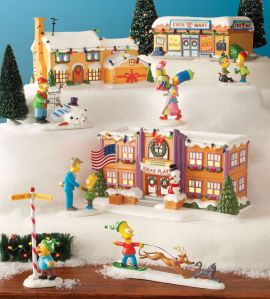 These are definitely going to be on display in my house come Christmas time. If I can wait that long.

3. Springfield Elementary:  When Department 56, a company known for crafting ceramic Christmas Villages, partnered with The Simpsons last year to do a series of Simpsons inspired ceramics it selected The Simpsons house, the Kwik-E-Mart, and Springfield Elementary to focus on. Lego should do the same. The school would probably end up out of scale when placed beside 742 Evergreen Terrace, but it’s a sacrifice I’m willing to make. As long as it includes a classroom (complete with chalkboard gag), cafeteria, and Principal’s office I’ll be happy. It would pair extremely well with the children of Springfield already released as well as Groundskeeper Willie and Edna. Skinner could also be included along with Lunch Lady Doris and Superintendent Chalmers. Willie’s tractor and shed could be a part of the package and Lego could even include some of the students who have yet to be released. There could be a school bus with Otto. There are so many possibilities! Like the already released home for The Simpsons, this would be an expensive set but one I’d be willing to invest in.

4. Krusty Burger:  We already have a Krusty, so why not the fast food restaurant that bares his image? Krusty Burger would be an attractive piece and would fit in with the Kwik-E-Mart as a smallish-scaled release. It could include another version of Krusty, maybe Sideshow Mel, as well as Mr. Teeny and everyone’s favorite local teenager, Jeremy, the squeaky-voiced teen! If we need to toss-in another member of The Simpsons family, how about an obese Homer? 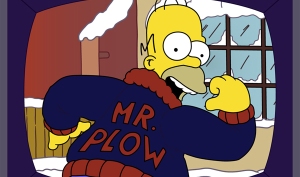 5. Vehicle sets:  New buildings are nice, and probably preferred, but if Lego wanted to do cheaper sets they could always turn to vehicles. One fans would be sure to eat up is Homer as Mr. Plow, one of the show’s most famous episodes. Naturally, that would pair well with Barney’s Plow King. A police cruiser for Wiggum that includes Eddie and Lou seems plausible. The Homer, with Herb Powell, would certainly be an interesting vehicle to behold. Any of Burns’ vehicles or the family’s station wagon would also make sense. If it can’t be included with Springfield Elementary, then Otto’s bus would also be a good one and would be another way to introduce more children of Springfield. Sadly, we probably would never get a Duff Blimp given the previously mentioned alcohol policy, but a man can dream!

There are countless other sets that would be welcomed but didn’t crack my top five. Ned’s house would make sense given it sits right next to The Simpsons’ and we’ve seen the interior of it many times on the the show. Something incorporating the Nuclear Power Plant would make sense, even if it’s just Homer’s control deck or Burns’ office. Burns’ mansion would also be interesting, complete with hounds, and a version of Lard Lad Donuts would fit in nicely with the other smaller builders I proposed. It’s probably unlikely that Lego supports The Simpsons line long enough for even half of these to get produced, but as long as it continues to sell well, Lego will likely keep putting out stuff. If you liked last year’s offerings and if the Kwik-E-Mart turns out well, let Lego know with your dollar that you want to see more of the many locations around Springfield!

This entry was posted on Saturday, February 7th, 2015 at 4:36 pm and tagged with action figures, bart, homer, krusty, lego, mr. plow, smithers, the simpsons, toys and posted in Television. You can follow any responses to this entry through the RSS 2.0 feed.
« Final Fantasy X-2 HD Remaster
Walt Disney’s One Hundred and One Dalmatians »

2 responses to “Revisiting The Simpsons as Lego”