The Batman character certainly has changed a lot over the past 50 years. Sure, under the mask he’s still Bruce Wayne, his parents are still dead, and he can usually be found prowling the streets of Gotham City by night accompanied by a juvenile in a red and yellow costume. Many things have changed though. For one, Bruce Wayne is no longer content to be a millionaire so he’s jumped into the billionaire ranks. The blue and gray spandex Batman used to wear is now often black and gray and even armor-plated, depending on the artist. Robin, thankfully, isn’t parading around in tights either or a bright yellow cape (no wonder why he’s usually the one getting picked off as opposed to Batman) and sometimes he even gets to be an adult. Mostly though, the tone of the work has changed. A lot of writers have received credit for turning Batman into a more serious and mature character during the 70’s and 80’s with most of it going to Frank Miller, but the change was actually rather gradual. In order for a character to survive decades upon decades and remain relevant, he has to change with the times as the general tastes of the public are always evolving.

In 1965, Batman was faced with becoming irrelevant. His comic book sales were down and he hadn’t appeared in a film reel in decades. Television was still pretty new, and pretty limited, but the idea to give the caped crusader a shot at television came up and by 1966 Batman was more than relevant once again; he was a star! Starring Adam West and Burt Ward as the dynamic duo, Batman appeared twice a week (a rarity at the time) on television in a serialized nature, often with the first night’s program continuing into the second’s. The show was a hit with children mostly, but also adults who grew up reading the Batman comics. Color TV was new at the time, and Batman was presented in eye-popping color for those fortunate enough to have a color set. The jazz-infused soundtrack was catchy, and the wild cast of villains gave the show a new flavor each week. Stars were born, of course, with classic comic villains such as The Joker and The Penguin seeing their star burn even brighter while villains mostly abandoned by the books, such as Catwoman and The Riddler, found a new lease on life. The show was basically a farce, with Batman and Robin presented in an ever serious manner oblivious to the ridiculous circumstances they would find themselves in week after week. The supporting cast of Commissioner Gordon (Neil Hamilton) and Chief O’Hara (Stafford Repp) were equally oblivious while the villains came across as the only ones in on the joke. Batman and Robin would find themselves in dire situations often, but would always get out of it either thru ingenuity, sheer coincidence, or via an oddly situation specific “Bat” gadget. This was Batman in the 60’s and it’s what people wanted.

Look out, caped crusaders! The Joker, Catwoman, Penguin, and Riddler have joined forces!

When the show was first conceived, it was decided that a movie would be created to help launch the program. Plans changed, however, when the network involved surprisingly picked up the show with production needing to start immediately to meet a January air date. The movie was back-burnered for awhile in order to focus on the television show, but filming resumed in the early spring to make a summer release possible. This ended up being a boon for the show, and the film as well, as Batman took off and created great anticipation for the film. The increased budget for a feature also meant that new gadgets and vehicles, such as the Batcopter and Batcycle, could be created for the film and then used again for the television show. In order to make the film feel bigger than the show, four villains were present instead of the usual one: Joker, Penguin, Riddler, and Catwoman. The only complication was Julie Newmar, Catwoman on the show, was unavailable so the part had to be recast and went to Lee Meriwether. Cesar Romero, Burgess Meredith, and Frank Gorshin were able to play their roles as Joker, Penguin, and Riddler, respectively, and the rest of the television cast was available for the film as well.

The style of the television show was incorporated into the film. The art direction is distinctly pop for the era. There’s an abundance of bright, primary colors. When the characters are put into a more realistic setting, such as Batman during the infamous bomb segment, they stand-out against the background and appear as out of place as a man in a batsuit should (though the extras in the shots carry on as if this is business as usual). The action sequences are surprisingly kept to a minimum, but when a fight breaks out expect many haymakers and somersaults (the editors saved the famous “pow” animations for the film’s climactic battle). The Batman theme is present but in small doses. The film’s main theme is perhaps relied upon a bit too heavily as it’s used for every long shot of Batman and Robin in their various vehicles used throughout the film.

Still the coolest Batmobile ever created.

The plot from the film is rather rudimentary. The four villains have teamed up to kidnap the world leaders using a bizarre dehydrating ray that reduces any human it touches into a pile of dust to be rehydrated later. The protagonists deduce their foes’ motives thru absurd means presented as deductive reasoning but are either lazy writing or an attempt at humor. Batman is the straight man while Robin is more of a hot-head (and possibly a sociopath who wants to murder alcoholics). The villains are as over-the-top as their TV personalities. Gorshin and Romero present their characters as cackling madmen with The Riddler having the added flaw of feeling compelled to leave Batman and Robin clues in the form of riddles. The film actually draws attention to how similar the two villains became once they hit television, but both actors perform so well in their roles it’s mostly forgiven. Meredith is a delight as The Penguin. He waddles everywhere and gets so much personality out of that long cigarette holder always stuck between his teeth. Meriwether’s Catwoman is basically the same as Newmar’s with her always feeling compelled to use the word “perfect” when describing something she approves of, but drawing it out into a long “purrrrrfect” because she is, after all, a crazy cat-person. Catwoman also gets to have an alter-ego in the form of Miss Kitka, who seduces Bruce Wayne to lure him into a trap so that he may be used as bait for Batman. As a kid, I found it odd how easily Batman is able to see thru a disguise The Penguin uses later in the film, but he’s blind to Catwoman’s. Apparently, even Batman sometimes ends up thinking with the wrong head from time to time.

The special effects in the film will impress no one accustomed to the movies of today. When Batman is attacked by a shark early in the film it’s clearly made of rubber and its teeth leave no imprint on Batman or draw blood. A scene of some ducks in the water are obviously decoys, and every character who throws a punch whiffs by about six inches on their target. And who could forget the climbing scenes? Scene thru the lens of today, these shortcomings just add to the campy charm. The comical bomb Batman is forced to dispose of is cheeky and the ray-gun effects are delightfully cliche. 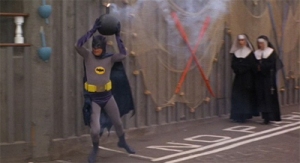 The film is a farce, an exercise in the absurd, and it is entertaining. I grew up watching the television show in syndication during the 80’s. I suspect my generation may be the last who can say that as I assume most kids today have never seen Adam West as Batman and I wonder if they would appreciate it. Perhaps if this is the fist Batman they’re exposed to they’ll see what the kids of the 60’s saw, or maybe they’ll just see a very ordinary looking man in gray and blue spandex. Batman was fun for me as a kid with all of the different villains and bat-gadgets and as an adult I find it funny and charming. It’s not really clever comedy, but I wouldn’t call it stupid either. The Batman premise is one that’s far-fetched and unrealistic, and the writers approach the character as such. While writers and filmmakers today are more interested in a realistic portrayal of a masked vigilante, it’s kind of fun to see the character portrayed in the only manner he could actually exist. The entire 1960’s television series is finally set for release this holiday season in a massive, and expensive, box set. That might be overload but for anyone seeking out just a taste of the Batman from 1966, the movie represents a good, and cheap, snap-shot. The blu ray from which this review is for, looks great considering the film’s age. The colors pop as they should, the picture is sharp, and there’s quite a bit of extra content. The film doesn’t look as old as it really is, which is often the best compliment one can give to such an old movie. This was my first Batman on television and I would go on to enjoy Tim Burton’s take on the character and fall in love with The Animated Series. I never lost my affection for this Batman though, and even though I view it in a different way than I did as a five year old, I am still charmed by it. Hopefully, I’m not the only one.