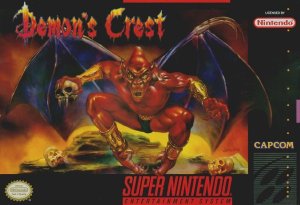 There is something about the 16bit era of gaming that I just find inherently charming. This is the era where games started to grow up, tell complex stories, but without losing site of what makes games fun. The visuals, music, sound effects, pacing – it was like gaming nirvana. That’s not to say it’s been all downhill since; far from it, actually, but I always enjoy going back to these games. And when I can find a good, quality game from that era that I’ve never played? Well, that’s just divine.

Demon’s Crest is one such game. Released by Capcom late in the Super Nintendo’s life-cycle, Demon’s Crest has garnered a reputation as a cult classic. Because of its late arrival, few people actually picked up a copy and experienced it in 1994. The Gargoyle franchise also has never been one of great importance for Capcom. For those unaware, Demon’s Crest is the third game in the Gargoyle trilogy which started on the GameBoy. The main character of these games, Firebrand, is that annoying red, flying enemy from the Ghosts ‘N Goblins games thrust into a starring role. The storyline for these games isn’t all that interesting or important, but credit Capcom for spinning off a seemingly random enemy into its own franchise. Since the end of the 16bit era and the dawn of the retro era, Demon’s Crest has become one of those handful of SNES carts that fetches over 100 bucks routinely on the secondary market. Thankfully, the Virtual Console exists so these games can be experienced by anyone with a Wii/Wii U console and a game like Demon’s Crest can get the recognition it deserves. 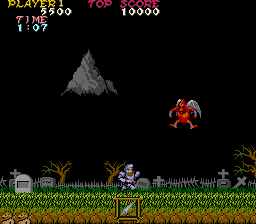 Cap com apparently saw something in this little, red, demon to warrant giving him his own game.

Demon’s Crest is essentially a side-scrolling platform game, but it’s a hybrid title in that it incorporates elements from the run and gun genre and the RPG. As Firebrand, the player explores various stages from the ground, in the air, and underwater. At the start, Firebrand can shoot a fireball as his lone attack, cling to walls, and fly through the air. The flying mechanic is neat and doesn’t feel cheap, as it often does in many games like Super Mario Bros. 3. By pressing the jump button while in air, Firebrand deploys his wings and can hover indefinitely. He can move side-to-side but cannot gain altitude (a power-up later in the game allows him to ascend in the air from a flying position). He can still attack, and pressing the jump button again causes him to drop and re-pressing the button at anytime while falling will initiate the process all over again.

After the first level is completed, the player gains access to a world map not unlike what is seen in the Final Fantasy titles from that era. Firebrand can fly to any stage from here and the game can essentially be completed at any point, though playing thru every stage multiple times is encouraged to collect power-ups and explore every nook and cranny. Firebrand is on a quest to recover various crests, each one grants him a new power. The earth crest, the only one that basically can’t be missed, removes Firebrands wings but gives him access to a dash move and a ground-hugging projectile. The water crest lets Firebrand breath underwater, the air crest lets him fly freely, and the best crests are basically a jack-of-all trades kind of power. Additional projectile attacks for Firebrand’s normal form can also be found, along with other power-ups, bottles for storing potions, and vellum for spells. The goal is to conquer the enemy Phalanx, but the secondary goal is to collect everything and get the best ending plus additional content in the form of power-ups and additional boss battles. 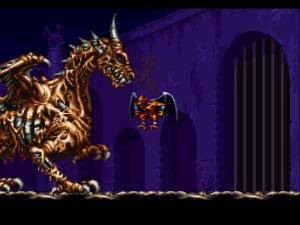 Some of the game’s bosses dominate the screen.

At first, the game seems like it’s going to be massive, but it can be completed in an afternoon, especially if you’re not after the best, ultimate, ending. There’s an element of trial and error at play, as the game intends for the player to acquire new powers to advance past certain spots. The game is forgiving in this regard as it grants unlimited continues and you can always quit to the map if a scenario seems too difficult. The levels are not simply “go right” kind of levels. They encourage exploration in all directions, and additional gargoyle powers will open up new sections so re-playing levels is practically essential to completing the game. Uncovering new powers is addicting and fulfilling and I was always eager to try out each new one I found.

Acquiring these new special abilities make the game easier, which is welcomed since the game is fairly challenging. No, Demon’s Crest is not among the most difficult of games to grace the SNES (like the title it’s spun-off from) but it isn’t a breeze. Most of the early challenge involves getting used to Firebrand’s controls. He handles easy enough, but the mind needs to be trained in order to best utilize the hover/flying ability. There are usually numerous enemies at ground level and in the air to contend with, and learning to dodge is the best way to succeed. The game is also fairly cryptic in that it doesn’t explicitly tell you what your new powers are capable of. As a result, the player has to experiment a little which may lead to some deaths here and there, but it’s not too bad. The game is fairly generous with restorative items and the in-game currency allows the player to stockpile health potions and the like. There are also some mini games to spend time on, though nothing exciting. The boss fights are usually a test to figure out what the best approach/power to use is. Some boss fights will seem impossible without the right ability, but once found, they’re a piece of cake. The hardest bosses are a challenge no matter what. They’re not controller-tossing hard, but will offer a nice test for the player. 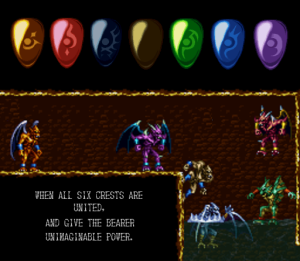 The music in the game is heavily reminiscent of other gothic-inspired titles, most notably Castlevania. It’s tempo is slower and Demon’s Crest finds it’s own sound. It’s not on Castlevania’s level, but it’s very enjoyable. As a later era SNES title, the game is pretty nice to look at. Firebrand is nice and big without dominating the screen. Many of the boss characters have a lot of personality or take up the entire height of the screen. The regular enemies, the canon fodder, are a little boring though and the game gets bogged down at times when a lot is going on. Sometimes the slowdown is actually helpful, but it is a weak point of the game. The controls are quite good, but there’s some missed opportunities to be found here. The shoulder buttons are not utilized when they could have at least been devoted to cycling thru Firebrand’s gargoyle forms. It gets tiresome having to constantly pause the game to switch relics, and many boss encounters require this very thing. The spells available to Firebrand are also fairly useless, and the only potion worth spending money on is the best one which restores all of Firebrand’s health.

When it comes to old games, I always prefer to experience them as they were intended: on their original console. When that is not possible (or in this case, too expensive), the Virtual Console is more than adequate. I played the game exclusively on the Wii U Gamepad utilizing the Gamepad’s screen instead of a television. The game plays just fine, and the ability to save is definitely welcomed. The original cart only provides a password save functionality, and while the game isn’t terribly long, it’s one I chose to experience in one or two hour at most sessions. It probably took me around six hours to finish the game, with some additional time spent after the fact going back and finding the items I missed to tackle the secret boss. This strikes me as being a pretty average game for the era in terms of length making it comparable to Super Metroid and Super Mario World.

Demon’s Crest is an excellent example of a forgotten classic. It’s probably not a top 10 game on the SNES, but that’s only because the SNES has arguably the greatest library of games of any console. Demon’s Crest is a unique blend of several genres, and its setting and style help set it apart from many of its contemporaries. If it sounds like something you would enjoy, I can’t recommend it enough as it’s worth the 8 bucks Nintendo is charging. And if you’re on the fence, I still say give it a shot because it’s a game that’s just inherently fun. Hopefully, this re-release on the Virtual Console makes Capcom some money and inspires them to revisit the Gargoyle series. A modern take on the franchise would be a most welcomed thing, indeed.

This entry was posted on Monday, November 24th, 2014 at 5:39 pm and tagged with 16 bit games, capcom, firebrand, ghosts 'n goblins, nintendo, super nintendo, virtual console, wii u and posted in Video Games. You can follow any responses to this entry through the RSS 2.0 feed.
« Batman: The Movie
A Flintstones Christmas Carol + Christmas Flintstone »