It’s probably safe to say that there has never been a more controversial Nickelodeon show than Ren & Stimpy. Conceived by John Kricfalusi and his team of writers/animators at Spumco, The Ren & Stimpy show was a throwback to the days of Tex Avery and Chuck Jones when cartoons didn’t need a message or contain any sort of educational content. Beyond the format, there were numerous controversies behind the scenes as well as Spumco was slow to deliver new episodes and John K. was constantly fighting with the censors at Nick over the content of his show, eventually leading to his firing with Nickelodeon/Viacom still holding the rights to the characters. Because of this, seasons 1 and 2 of The Ren & Stimpy Show are easily the seasons held in the highest regard by cartoon fans as they’re the only two series creator John K. worked on. The show would last another 34 episodes after John K’s firing and would eventually be revived in the new millennium when the rights reverted back to Kricfalusi as the short-lived Adult Party Cartoon. Kricfalusi’s right-hand man, Bob Camp, remained onboard with Nickelodeon and there were some good episodes released in season 3 and beyond, but the best was definitely contained in the first two seasons.

Ren & Stimpy was another take on the venerable cat and dog genre of comics and cartoons. The two were designed to play off each other with Ren being the smart, cunning, and less conscionable one, and Stimpy the dim-witted, good-natured character. There was no continuity from one short to the next allowing Ren and Stimpy to hold-down whatever kind of job fit the mood of the short, live in any part of the world, or just plain exist in a more ridiculous version of reality than the next. Sometimes they lived in a house, sometimes a trailer, sometimes a tree, though usually they were poor and sometimes even homeless (as was the case in the pilot). Spumco’s addition to the genre was more gross-out humor, more surrealist imagery, and just out and out lunacy. Save for perhaps Marvin The Martian, most Loony Tunes shorts occurred in reality with anthropomorphic characters. There were different rules for physics, and firearms certainly never functioned as intended, but there did seem to be clearly defined rules. The Ren & Stimpy show shunned such rules. Ren, in particular, seemed to lack a definite form as his face and body would constantly change shape to suit the scene. Expression was important to John K. and his characters often exhibited new and interesting expressions, with Kricfalusi allegedly demanding his animators not repeat expressions in subsequent cartoons. The backgrounds often lacked form and were more interested in surrealism. The pilot, “Big House Blues,” is probably the best example of this. Whether it was by design or to keep costs down, I’m not sure, but it added a unique dimension to the show. 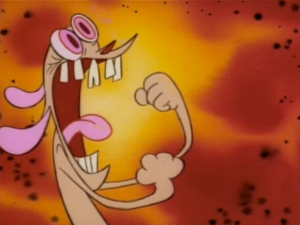 Aside form the presentation aspects, The Ren & Stimpy Show differentiated itself from other programs of its day and past with its own brand of humor. Violence was a staple of the program with Ren often getting irritated with Stimpy and resorting to slapping him across the face while berating him for being a “fat, bloated, eeeediot!” Even the characters would react to a situation in a violent fashion with their eyes bugging out impossibly far and their brain smashing through their skull. The show also delighted in poking fun at its audience by creating parody commercials for children’s products that really weren’t that far off from the real thing (I bet 90% of the viewing audience wanted some powdered toast). There was also plenty of gross gags throughout the show. The gross humor is probably what the show is remembered for best over 20 years since its debut. If it wasn’t Stimpy’s hairballs making you gag, it was the close-up still shots of characters like the fat lady from “Fire Dogs.” These hyper-detailed, unanimated sights, were another unique feature of the show often utilized to show just how ugly the world of Ren & Stimpy was. There was plenty of scatological humor as well surrounding used kitty litter or even Stimpy’s personified fart.

It should be pretty obvious at this point that The Ren & Stimpy Show was not for everyone. For those of us who grew up with Bugs Bunny and Daffy Duck, it wasn’t such a radical departure but the inclusion of the gross elements turned off a lot of the older generation. Kids like gross stuff though, well, some do. I was probably the right age when the show premiered for it to leave an impression on me. Sometimes the humor was over my head, and it took me several years to notice the not-so-subtle homosexual innuendo between the main characters, but for the most part I got it and it worked for me. And now when I re-watch it, it’s almost better because a part of me is surprised at just how much made it to air and how Ren & Stimpy couldn’t exist in today’s world. Seasons 1 and 2, in particular, hold a special place in my heart. I watched the show until the end, but these episodes are the ones I remember the best and the ones I enjoyed the most. If I were to make a top ten list of my favorite Ren & Stimpy cartoons, all ten would likely come from this set. 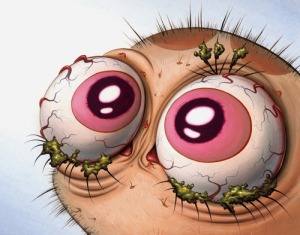 The first DVD release of The Ren & Stimpy Show took awhile to arrive, and when it finally did it was greeted with a mixed reaction. Not because of the episode selection though. Sorted in their original air date order, the episodes span the best of the era. There’s “Stimpy’s Invention” and its memorable “Happy, Happy, Joy, Joy” sequence. There’s the visit from Ren’s cousin Sven and the absurdity of that ending. The trilogy of Commander Hoek and Cadet Stimpy are here as well, along with other notable episodes such as “Rubber Nipple Salesmen,” “Fire Dogs,” and “In the Army.” This set basically could be titled the John K. era, and while John K. proved with the Adult Party Cartoon that he didn’t exactly possess the golden touch, the show was at its best when he was in control and voicing Ren. His Ren is a little more sinister sounding than Billy West’s, who voiced Stimpy and would voice Ren for season three and beyond (he also voiced him in a couple of season two episodes, though I am not certain why). The show embodied those surrealist elements more freely under John K’s watch and following his departure the show focused in more on the gross aspects. It lost a little bit of its soul, but I suppose that should have been expected. 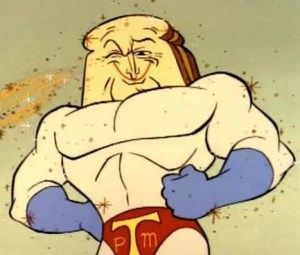 The show created other stars other than just Ren and Stimpy, probably none no bigger than Powdered Toast Man.

This DVD set’s biggest selling point was the inclusion of the original pilot and the infamous “banned” episode, “Man’s Best Friend,” starring George Liquor. Emblazoned in bold letters on the cover of the DVD is the word “UNCUT” designed to grab the attention of any who see it. What isn’t explained, is that the word only applies to a select few episodes. By the time this DVD was created, Ren & Stimpy were airing on the Spike network in conjunction with the new Adult Party Cartoon. The Adult cartoon was cancelled almost immediately, but Spike continued to air what it dubbed the “Remastered Classics” of old Ren & Stimpy cartoons. Unfortunately, the television landscape had changed and Spike demanded more time for commercials so these remastered classics were less remastered, and would have been more appropriately titled as edited for time. These new masters served as the basis for most of this set and some things were lost. “Ren’s Toothache” seems to be the biggest casualty as much of Stimpy’s oral hygiene sequence is missing, which was an excellent example of the show’s use of sound effects to create an uncomfortable reaction. The other big victim is “Haunted House” and its removal of the insane Bloody Head Fairy. Basically, the cover is a lie and a pretty cheap trick to attract attention. It’s for that reason I actually waffled on buying this set until recently when it was down to around ten bucks. I don’t regret my purchase, but it still bugs me that many of these episodes have been edited and aren’t the episodes I saw as a kid.

At least we now have “Man’s Best Friend” and didn’t have to resort to the internet to view it. It’s not the best episode of Ren & Stimpy, but it’s a solid B+ affair with perhaps the show’s most violent sequence. It’s also nice to finally see the unedited version of “Big House Blues” and the full scenes we’ve been seeing in brief clip form during the show’s opening sequence for years (specifically, Ren drinking from a very gross looking toilet). There’s some bonus content in the form of a brief documentary on the show’s creation and around half a dozen commentaries. Because the show was only a half hour, this set is the type you can basically blow through in a weekend, but it will be a pretty good weekend.

This entry was posted on Sunday, May 18th, 2014 at 10:14 am and tagged with 1990's cartoons, billy west, censorship, john kricfalusi, nickelodeon, spumco, viacom and posted in Television. You can follow any responses to this entry through the RSS 2.0 feed.
« Mario Golf: Toadstool Tour
Mario Kart 8 »