With spring comes golf season and this spring brings a new Mario themed golf game as well.  Titled World Tour, the game is set for release this week on the Nintendo 3DS which got me to thinking about my favorite title in the Mario Golf series:  Toadstool Tour. Released in 2003 for the Nintendo Gamecube, Toadstool Tour was the sequel to the Nintendo 64 game (simply titled Mario Golf) and was the first Mario Golf title to really incorporate the over-the-top components of Mario’s Mushroom Kingdom setting.

Mario has a history of having various hobbies and other jobs. We first knew him as the Princess rescuing Jump Man in Donkey Kong before moving onto his more popular plumber gig for Mario Bros. and the Super Mario Bros. series. Not long after his previously mentioned debut he almost immediately jumped into the world of sports. Nintendo basically decided Mario was its most marketable persona and stuck him into everything. He had cameos in the likes of Tennis and Punch-Out!, but it was the original Golf game that first allowed users to control Mario as he took part in a sport.

Golf games in general have been around basically just as long as video games. Golf is one of the few sports that’s played all around the world so it makes sense that it would be well-represented in game form. Still, it can seem kind of surprising at just how many golf games there are considering it’s often not been a sport real popular with kids (before Tiger Woods, it wasn’t really popular at all). It works though in game form since it doesn’t really require much out of its AI opponents and the slow pace makes it easier to plan. And really, the basic gameplay hasn’t changed a whole lot between NES Golf and Toadstool Tour, though pro-oriented titles like Tiger Woods have made advancements with analog control.

Toadstool Tour is pretty basic on the surface. The user selects an onscreen avatar and a mode for play. Modes include tournament, match play, and Mario specialty modes like coin mode. Each character has its own unique attributes affecting power, control, and spin and also a natural ball trajectory. Mario is the most well-rounded and his ball travels straight while a power hitter like Bowser has a mean hook and less control over where his ball is going. Once on the course, the player has two main modes of play:  auto and manual. Auto is basically a one-button approach where the user lets the CPU take over after lining up a shot and pressing A twice. It’s good for kids but most gamers will find it unsatisfying and opt for manual. On manual, the player hits the A button to start the character’s swing and then a bar at the base of the screen starts to fill. The player has to hit the B button to stop the bar at the desired spot for power, and then stop it again as it comes back for control. Once the ball is in the air, the player can affect the spin of the ball in one of four ways: topspin, backspin, super topspin, and super backspin. For those unfamiliar with golf, topspin basically extends the distance of the shot a few yards by making sure the ball rolls forward once it strikes ground. Backspin does the opposite. The standard versions of both are pretty true to life, while the “super” versions can really exaggerate the movement of the ball. Pre-shot, the user can also affect what part of the ball the character strikes by using the D pad. Once the swing starts the player has to hold the analog stick to match the new strike point allowing the player to put more loft on the shot or hook/slice it in a certain direction. 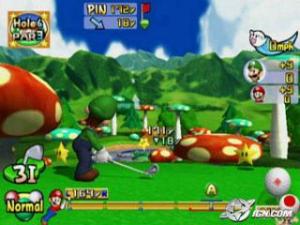 Toadstool Tour may be nearing its eleventh birthday, but it’s still a pretty nice game to look at.

Players have access to a full arsenal of clubs. The game will make a default selection that 90% of the time works best. It’s usually on approach shots where you may opt to go for a different approach such as putting from the fringe as opposed to a chip-shot. The power meter can also be toggled from normal, power, and approach. If using the putter, there are three options for short, medium, and long range. The user is free to select whatever option he or she desires, though the power function has only six uses per round (a perfectly executed shot though, max power plus perfect accuracy, won’t consume a power shot reserve). There are enough options to approach any shot, though if the game has one short-coming it’s with the putting. Putting does not have an accuracy input, it’s simply a two-press function for power. Longer shots are actually fine, but the really short ones can be more troublesome because of how touchy the meter is. For short puts, you basically have to let the meter fill all the way and set your power when it’s coming back. This takes getting used to and novice players will likely miss some short ones as a result which can be really frustrating. Many golf games will have a “gimme” putt feature where a yard or less is automatically sunk by the game. Such a feature would be welcomed here.

The basic gameplay works well, putting excluded, and it actually surprised me with how robust the shot options are. It wouldn’t be a very special game though if it ended there. This is a Mario sports title after all, so a certain amount of “wackiness” is expected and the game mostly delivers in that respect. There are six courses to unlock, not including the par 3 course, and each new one unlocked ups the difficulty factor as well as the amount of Mario-isms. The first course is fairly basic, as are the next couple, but later ones add things such as warp pipes and piranha plant hazards. The final course takes place at Bowser’s castle and features numerous lava hazards, thwomps, and other features common to such a setting. These courses can be pretty difficult, but are definitely more rewarding. Completing courses and certain game modes unlocks additional characters, and competing against individual characters in match play unlocks star versions of those characters. The star characters have improved base stats and are practically mandatory if you want to score under par on the most difficult courses. 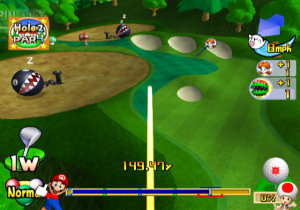 It’s not often you have to worry about chain-chomps when getting in a round of 18.

Even though the Mario theme is represented well here, I can’t help but wish there was more. Mario has visited all kinds of different worlds throughout his games and I feel like crazier courses could be designed to accentuate that even more. It is my hope that the new game does just that. Additional courses in general would also be welcomed. Six feels a little light. Eight, or even ten, would be best. There could be ice courses, pipe courses, even a floating airship course. And now that the Mario Galaxy series has come along, some funky gravity-defying course would likely be a fun experiment in course design. More courses would naturally lead to more variety. Most of the courses in Toadstool Tour encourage power over “target golf.” The hardest courses negate that to some degree, but the power golfers definitely seem to have an advantage on most courses. An ice course, for example, would definitely emphasize spin and control over power as the ball’s movements once it hit the ground could be pretty unpredictable.

Mario Golf: Toadstool Tour is currently the best Mario Golf game released and probably the best Mario sports title as well. It strikes a nice balance between the actual game of golf and the more off-beat qualities brought by the Mario gang. It could probably stand to be even more outlandish, and some minor control tweaks could also improve the experience, but as it stands it’s a fun game of golf and offers a different experience from the usual EA Sports type of game. If you’re looking for a home golf game and something to play with friends, Toadstool Tour is a cheap and effective solution.

This entry was posted on Monday, April 28th, 2014 at 1:09 pm and tagged with bowser, camelot, donkey kong, gamecube, golf, luigi, mario, nintendo, sports games and posted in Sports, Video Games. You can follow any responses to this entry through the RSS 2.0 feed.
« Castle of Illusion Starring Mickey Mouse (2013)
The Ren & Stimpy Show: Seasons 1 & 2 »