Where, oh Where, is Yorick Brown? With a new film in the Ghost Rider series set for release in the upcoming weeks, it got me to thinking about the comic book medium and how it has translated to the big screen.  Hollywood has always been interested in comics.  This interest for a long time was reserved really for the super elite characters of Superman and Batman.  Over the last two decades though, that has changed tremendously.

I suppose it started in the 80’s to some degree.  During that decade we were treated to such cinematic gold as The Punisher and Howard the Duck.  They were, of course, something far less than gold and today are only viewed by those looking for a laugh.  I can sort of see why a production company would think the Punisher character would work for a movie.  Especially considering that this was the time when the action hero picture was making big bucks.  I have no idea how Howard the Duck ever received the green light.  It was a terrible idea, and the results were pretty terrible as well.

I suppose we have Fox’s X-Men, and to a lesser extent Blade, to thank for this wave of comic book films.  X-Men seemed to do just enough to satisfy critics and fans of the comic, and in turn, it made quite a bit of money.  This made Marvel Comics, which had struggled financially during a lot of the 90’s, all kinds of happy as it quickly began licensing all of its franchises for films.  At the time I think a lot of people expected little to come from these agreements, but it seems like the opposite occurred.  Not only did the X-Men make it to film, but Spider-Man, The Fantastic Four, The Punisher (again), Daredevil, and more.  Some of these sucked, but it seems like most actually made money so the studios keep going back again and again.  Not to be out done by its chief rival, DC also got into the game with not just Batman and Superman films, but Catwoman, Watchmen and Green Lantern.  We’ve even seen the less popular titles make it to film as well such as Hell Boy, Road to Perdition, and V for Vendetta.

If you’re reading this then it’s probably safe to assume you like both comic books and film, so I’m going to assume most are aware of the relative quality of the above pictures.  There’s some good ones in there and some even bring about good debates, but there’s also a lot of garbage.  You’re probably also aware that even Marvel’s Man-Thing character managed to get a movie during this period, it just didn’t play in theaters.  That’s a pretty obscure character and when you combine that with Ghost Rider and Thor it almost seems crazy that there are people who think these characters can make a good movie.  I know Thor is kind of a classic character in the Marvel Universe.  I’ve never been a fan so maybe I’m biased but I look at a character like Thor and I just don’t see a good film.  I don’t even really see an interesting character.  Thor works best when he’s paired with other characters, not when he’s the star.  As for Ghost Rider, well, at least he looks cool (when not played by Nicholas Cage).  Which leaves me with one big question:  Where is Yorick Brown?

Has any comic series come along in the last 20 years that is better equipped to make the leap to the big screen than Brian K. Vaughan’s Y: The Last Man?  I would argue no and for several reasons:

One, the main character is not a super hero.  Yorick is just a college-age kid who happens to be the last man alive.  He’s an amateur escape artists so that gives him a unique set of skills to be worked into the main plot, but there’s nothing flashy about him.  This means no awkward looking costumes and no big, expensive special effects.  In other words, he’s cheap!

Two, the main character fits right into the target demographic.  He’s young and he’s male, isn’t that who the studios are trying to attract?  Make him played by a cute actor and now suddenly the women want to see the movie.  This is easy!  He’s also a pretty charming character with a quick wit not, unlike Peter Parker, but also has some pretty common insecurities when it comes to women.  If anything, he’s too perfect for film.

Three, the story is unique and interesting.  All of the men on the planet suddenly drop dead except one.  There are so many questions that initial premise creates, enough to last a full trilogy.  It also avoids the whole over-played super villain character.  We don’t have to deal with some misguided scientist who accidentally gave himself super powers but warped his own mind in the process.  No one is out for world domination, and the antagonists are relatively unknown.  There’s an ultra feminist cult that shows up from time to time, but they’re not the main villain.

Four, it’s a pretty small cast.  There’s Yorick and his two female companions Agent 355 and Dr. Allison Mann.  They meet quite a few people on their trek across the globe, but there aren’t many re-occurring characters.  This means no awkward, giant cast like with X-Men or the upcoming Avengers flick. 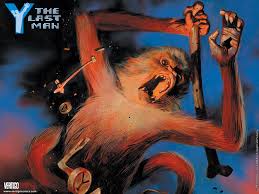 Ampersand, a star just waiting to be born!

Five, there’s a monkey!  Americans love monkeys, and Yorick’s other companion is Ampersand, a male capuchin monkey who happens to be the only other living, male mammal on the planet.  He also throws poop.

Yorick’s search for answers plays out across 60 issues like a good adventure story.  I suppose that’s another plus for Hollywood, this story has a beginning and an end.  It’s not an on-going book like most comics and it’s been over for quite a while.  60 issues sounds a like a lot to fit into a trilogy, but they’re pretty action and scenery driven books easily classified as light reading.  I think I breezed through most of the story in about a weekend.  And given that it’s 60 issues it allows the director and screenplay writers to break it up into thirds.  It was released in 10 graphic novels after the main run, which is how I experienced it, and if I was to write a screenplay for the first movie I’d focus on the first three books.  Some stuff would obviously be trimmed out, book 4 seems like an obvious one to see some cutting down, but I think it would be fairly easy to adapt the entire run over three films.

Which is actually the answer to my question.  As much as I’d like to think I am, I’m not smarter than the studio heads of the major production companies.  Anyone who even looked at a summary for Y: The Last Man knows it could be adapted for film and that it would have a chance to do well.  That’s why the rights to the film property have already been secured by New Line Cinema, which is a sister company of Vertigo, the comic book company that ran Yorick’s story.  Unfortunately, New Line isn’t one of the biggest in the game and it’s their bottom-line that’s preventing the biggest obstacle.  Vaughan has done a screenplay for a potential film, and D.J. Caruso was attached to direct, but one major obstacle has reared its rather ugly head.  New Line is hell-bent on doing Y: The Last Man as a stand-alone movie, while Caruso and Vaughan see it as a trilogy.  It would seem like the compromise would be to do the film the way Vaughan and Caruso wish to, and if it makes money, to go ahead with two more, but I guess things aren’t that simple. 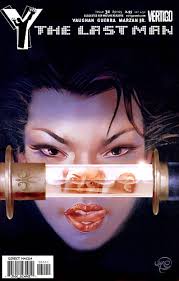 I know exactly what you're thinking, "You mean to tell me there's ninjas too?! Why hasn't this happened?!"

As of right now, that’s where we stand.  Things were moving pretty quickly for Yorick for awhile, but not much has been said since 2008.  Caruso has since walked away and no replacement has been announced.  There was talk of potentially turning the comic into a television series, but I don’t think such talk was ever serious.  I could see it working for TV in a one hour format, but would fear that it would never reach the end.  If the show was a success, there would be a temptation to just run with it until people got sick of it, meaning new story-lines would be created on the fly.  And if it failed, we’d just end up with a season or two and not the complete tale.  I still think a trilogy is the best way to go about it, and I’m puzzled that New Line thinks it won’t make money on a trilogy.  There’s just no way to condense a 60 issue comic into a two hour film and do it right.  I also don’t think a studio could get away with the Watchmen approach of one giant movie.

It’s really too bad, as I think Yorick Brown could be a minor star on film.  Because the book was put out by Vertigo, it hasn’t reached the audience it would have if done by Marvel or DC.  And if it had been done by Marvel, it would undoubtedly have been made into a film by now.  It’s plot line is thought-provoking and quite interesting.  Mostly, the story is just fun and that translates to any medium.  Maybe the studio will budge on its demands in time and let a film-maker do it the way he or she wants to.  Kick-Ass and other off-beat comic films have done well and made their studios money, so it seems like eventually Yorick will have his story told as well.  The wait is killer though, and the longer it goes the possibility that The Last Man will be forgotten starts to seem more and more likely.