Why I’m Not Excited for Diablo III Blizzard Entertainment, the developer for the upcoming PC game Diablo III, has earned a reputation over the years as one of the best, most consistent developers in gaming today.  Once called Silicon & Synapse, Blizzard was an American developer in an industry still dominated by the far east.  It focused on game ports at first, before going on to developing its own titles in the early 90’s.  The company had some minor hits on consoles with games like Rock n’ Roll Racing and The Lost Vikings, but the developer really became known when it released a real time strategy (RTS) game for the PC titled Warcraft:  Orcs and Humans.  Warcraft was an example of great timing on the part of Blizzard.  It wasn’t all that unique from a gameplay standpoint as the RTS genre had already been firmly established by the Dune series from Westwood Studios, the other big name in the RTS genre.  Blizzard and Westwood would have a rivalry through-out the 90’s with the two producing big name franchises like Blizzard’s Warcraft and Westwood’s Command & Conquer.

What Blizzard is often most credited with when it comes to the RTS genre is adding plot to the game.  This goes beyond merely setting up the conflict but extends to in game missions.  Where Dune was comfortable to have the player focus on annihilating the opponent on a given map, Warcraft added purpose.  There were many straight-forward kill the enemy missions, but there were also rescue missions or establish a satellite base type of thing.  It seems like a small thing, but it did help break up the monotony of the game.  And Warcraft’s setting did go a long way as well as the medieval/fantasy theme worked well within the game and the major conflict of orcs v.s. humans proved surprisingly dramatic.  It wasn’t high brow kind of stuff of course, though the plots would become more complicated in later games, it was basically good v.s. evil but that worked well enough at the time.

Most people today know Warcraft more for the World of Warcraft franchise than anything else.  Like with the RTS series of games, WoW came at a great when the massively-multiplayer online (MMO) role-playing genre was taking off.  Blizzard again didn’t do much to rock the boat from a gameplay perspective, but the Warcraft franchise worked well in this setting and Blizzard made everything easy on the new comer.  This made WoW the most accessible title in the genre and a main reason why it has become the studio’s biggest cash cow.

Of course, Blizzard didn’t just make money off of the Warcraft franchise.  Also paying out dividends was the massively popular StarCraft.  As most would suspect given the name, it’s basically Warcraft in space.  The conflict is new, and has now been expanded to three parties instead of two, but the basic gameplay is still the same.  StarCraft did prove more complex.  While Warcraft and its sequel established a pretty basic strategy, StarCraft’s game challenged players a bit more.  Resource management was more complex and simply overwhelming the opposition didn’t always work as the factions waging war against one another were now quite different.  In Warcraft, the orcs and humans were practically palette swaps as they were so similar.  There were a couple noticeable differences (mainly in spells earned by higher level units, which actually proved to be a pretty big difference as the Ogre Mage’s bloodlust was ultra-powerful) but for the most part each side had its own main melee unit, ranged unit, siege unit, etc.  StarCraft’s humans (Terrans), Protoss, and Zerg each came with their own gameplay strategies that the player needed to exploit in order to win.  A Protoss player would not approach a fight the same way a Zerg player would, nor would he attack a Zerg enemy the same way he would a Terran enemy.  This helped make StarCraft hugely popular online and in competitive settings.  Strangely, StarCraft wouldn’t receive a proper sequel for over 10 years. Blizzard’s other big franchise, and the one this post is supposed to be about, is the Diablo franchise.  First released in 1996, the Diablo franchise is your basic dungeon crawler.  It’s the most straight-forward and simple title in Blizzard’s catalog.  The first one was especially basic.  It only included three characters: the warrior, rogue, and mage.  Each one had its obvious strengths and weaknesses. The player took the character through the game’s lone dungeon of 16 levels with the main goal of destroying the game’s antagonist, Diablo.  There were quests along the way given out by the game’s townspeople or just stumbled upon while journeying through the dungeon.  None were of the head-scratching variety and merely added a little back-story to why you were killing a certain enemy.  The game’s narrative was mostly non-essential, the real drive was to simply level up and make your character as strong as possible.  Finding loot was the main goal as you never know what the next monster would drop or what would be in the next destructible barrel.  Each level of the dungeon was also randomly generated which encouraged replay.  Once the game was beaten it didn’t end there as the player could continually take the same character through the dungeon again and again until boredom set in.

Diablo was quite successful, and its sequel Diablo II even more so.  Diablo II arrived in 2000 and carried over the same point and click mechanics but added more variety to the character classes.  Where there were once 3, now there were 5.  There was also a skill tree implemented to make each class feel different.  Now the warrior class wasn’t just stronger, he could do special attacks or leap (he was also now called the barbarian).  The game’s expansion would add more classes as well giving gamers far more variety.  The game was also much bigger and more challenging, but was still mostly just a dungeon crawl with the main goal of the player to create the most powerful character possible.

The theme for Diablo II: more is better.

I was hooked on the original Diablo.  I beat the game with each of the three classes multiple times.  My favorite was the rogue, though the mage character ended up being the most powerful if enough time was invested.  His magic was so strong that I rarely had to equip him with a weapon.  In Diablo II, I found myself suitably addicted once more but the game’s massive size cut down on my willingness to play through it again and again.  As such, I only really played through it twice; once with the necromancer and once with the amazon.  By the time I was nearing the end with the amazon (and truthfully, I can’t remember if I beat it or not with her) I had had enough.  By this time I felt Diablo had been eclipsed by Bioware in the dungeon crawler genre.  Baldur’s Gate, and later Neverwinter Nights, offered a more rewarding experience.  Diablo could be boiled down to the fact that you just clicked on the enemy you wanted dead and spammed potions to stay alive.  Diablo II did liven up the experience with the skills system, and some characters introduced supporting characters as well but they weren’t as tactile as the multi-person party found in Baldur’s Gate.

This sort of leads into the main point of this post:  I’m not excited for Diablo III.  Diablo III is set for release this year, and maybe as early as next month, for the PC and Mac.  Whether or not I’m excited to play it is actually irrelevant, as I don’t think I own a machine that could run it.  My laptop can run StarCraft II in the low settings just fine, but I suspect more muscle is needed to do the same with Diablo III.  Even if the game was coming out on Playstation 3, I don’t think I’d have much desire to play it.  It’s possible I’d end up getting it at some point, but unenthusiastically.  That’s fine and all, but I feel like I’m in the minority.  I feel like Blizzard has created a reputation for itself that includes amazing games.  Blizzard notoriously takes forever to release anything with a focus put on quality.  It’s in some ways kind of ridiculous considering it now has powerful financial backing from Activision which means the development teams are much larger than what they once were.  It made sense for a small developer to take awhile to get things to market, but now it just seems like a marketing strategy.  Blizzard cried about not having enough time to get out StarCraft II, so it removed the Zerg and Protoss campaigns in order to make its release date.  It was announced in 2007, but work basically had begun in 2003, and yet the game was released in an incomplete state in 2010.  The not enough time excuse just rang hollow and it sounded more like a money-grab than anything as now gamers will have to buy two more games to complete the story. 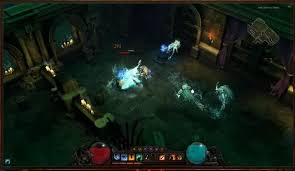 Gameplay shot from Diablo III. As one can see, aside from looking better, not much has changed.

Diablo III has had a more quiet release schedule.  Perhaps Blizzard has learned to better manage its resources or just wisely has kept its mouth shut until the game is within a couple of years of release.  Still, I was surprised when I looked up the game for this post that it was announced in 2008, nearly 4 years ago.  I suppose it just feels like it hasn’t been that long because my interest has remained low.  Diablo offers a fun, but shallow gameplay experience and one that just doesn’t work for me anymore. When I was in my teens I could play these dungeon crawl types with more enthusiasm but now they’re just boring for me.  A lot of them seem to receive similar critical reactions to my own, but I suspect Diablo III will be a critical darling despite not doing much different.  Blizzard will deliver a solid narrative, something the company has become well-versed in doing, which will go a long way towards giving the game greater purpose.  Gameplay wise, I suspect it will be the same experience just with a different lens.  For fans of the first two games, that will probably be good enough as Blizzard’s long development windows does help to create an increased interest.  If Diablo had an almost annual release schedule like some franchises it would have died a long time ago.  The same could really be said of StarCraft and Warcraft as the RTS genre really became over-saturated in the last decade to the point of nearly killing it.  Spreading out the releases helped keep things fresh, though Blizzard did justifiably change and enhance the gameplay experience when moving from Warcraft II’s straight-forward approach to the hero one of Warcraft III (which is why I consider Warcraft III Blizzard’s finest hour).

Diablo III will be released at some point, probably sooner rather than later (though one should never hold their breath where Blizzard is concerned) and will probably be a commercial success.  I won’t be among those purchasers though as I feel like I’ve already played it.  This post isn’t meant to slam the franchise, the company, or its fans.  Just the ruminations of one gamer who can’t help but look at Blizzard and wonder what all the fuss is about at this point.  It’s been a long time since Blizzard really did something unique, and if it wants to be considered one of the best developers around, it’s time to see the company do something different.  Diablo III is, without question, anything but different.

3 responses to “Why I’m Not Excited for Diablo III”