Yesterday I went over some of my favorite Christmas movie and TV specials.  I covered most of the basics, the specials pretty much everyone agrees are required viewing around the holidays.  Today I’m going to go into the more non-traditional ones and focus more on Christmas themed episodes of some of my favorite shows.  Let’s start off with one that should seem pretty obvious to anyone who has read my blog in the past.

It just wouldn't be Christmas without a little Danzig.

Aqua Teen Hunger Force: “Cybernetic Ghost of Christmas Past From the Future” – Cartoon Network has made a lot of money off of their adult swim programs simply by creating funny shorts for practically no cost by traditional standards.  Aqua Teen Hunger Force is one such program where the animation is crude but the laughs often come in bunches.  The first Christmas special for the show was a memorable one, though it had very little to do with Christmas.  The neighbor of the Aqua Teens (Master Shake, Frylock, and Meatwad) Carl, wakes up one morning to find his swimming pool full of blood and an annoying robot soon shows up with a long, drawn out tale about the origins of Santa.  It’s ridiculous, to put it mildly, and Carl finds out that if he wants to get rid of the blood and the robot he has to give of himself to a great, red, ape…sexually.  Refusing to do so, Carl puts his house on the market which attracts one very interested buyer:  Glenn Danzig.  Danzig voices himself as he becomes the neighbor from Hell and even lets the writers poke fun at him a little.  Light on holiday cheer, but big on laughs, this one is a staple in my X-Mas rotation.

Family Guy:  “A Very Special Family Guy Freakin’ Christmas” – When Family Guy first premiered on Fox following Super Bowl XXXV it did so with a ratings thud.  It managed to hang around for 3 seasons (more like 2.5) before getting cancelled, and then famously re-emerged several years later.  I loved Family Guy when it first arrived, but over the years I grew tired of it.  The newer episodes rarely entertain me, but many of the old ones can still make me laugh.  Family Guy’s first Christmas special is one such episode.  It’s an appropriate tale for the Griffen family as everything that could go wrong does and we’re treated to an amusing scene where Lois goes bat-shit insane.  Stewie also has a pretty memorable turn as baby Jesus and we get to learn what Peter thinks Christmas is all about. 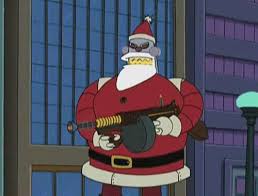 "Santa Claus is gunning you down!"

Futurama:  “X-Mas Story” and “A Tale of Two Santas” – For me, Futurama and Family Guy will always be linked, just because both premiered on Fox and both met with unfortunate ends before rising from the ashes once more.  While I outgrew Family Guy’s antics, I still love Futurama.  Sure the new episodes haven’t been as good as the first 4 seasons but it’s still a sharp and enjoyable comedy series.  And for the Christmas season, I can’t separate the two specials that came before the cancellation.  “X-Mas Story” serves as Fry’s introduction to what Christmas is like in the year 3000.  It’s literally called X-Mas and is horrifying.  A homicidal robot Santa (voice of John Goodman) patrols the skies on X-Mas Eve and slays anyone he finds (except Zoidberg) and instead of families coming together to spread good cheer, they come together to cling to one another in fear.  “A Tale of Two Santas” followed it where Bender had to take up the mantle of Santa and try to reclaim X-Mas.  It doesn’t go too well and Bender finds himself on death row.  There are lots of witty jokes throughout both and I love Professor Farnsworth’s opinions on 20th century modesty.

Batman The Animated Series: “Christmas With The Joker” – Batman’s second episode marked the debut of Mark Hamill as The Joker.  Hamill’s debut was a flawless one, as The Joker is first shown singing a familiar Batman themed “Jingle Bells” parody as he blasts out of Arkham Asylum and takes over the Gotham television air waves.  Meanwhile, Dick Grayson is trying to get Bruce to sit down and watch It’s a Wonderful Life as he’s never seen it.  When Dick asks why, he coyly replies “I never could get past the title.”  Joker kidnapping some of Gotham’s elite throws a wrench into those plans and we get to watch Batman and Robin try to track him down before a final, satisfying confrontation to close out the episode.

X-Men: “Have Yourself a Morlock Little X-Mas” – I already talked about this one, and every other episode of X-Men, months ago so I won’t say much here.  I’ll just add that, as corny as it is, it always gets me at the end.  Light on action, heavy on sentimentality, it’s a standard holiday special but with the X-Men.

South Park:  “Mr. Hankey The Christmas Poo” – South Park has many memorable Christmas episodes, so many it’s hard to choose just gone.  There’s Christmas in Iraq, satanic woodland animals, and even Charlie Manson gets in on the fun in one episode.  My personal favorite though will likely always be the original, the episode that introduced us all to Mr. Hankey, The Christmas Poo.  The premise of a talking piece of poop is outrageous, and the visual gags are a riot, especially the one where Mr. Hankey is seen bathing in Mr. Mackey’s coffee.  The plot of the episode is actually pretty solid as it focuses on how Kyle feels lonely at Christmas because of his Jewish heritage.  This also was the first episode where Kenny didn’t die, which was kind of a big deal in 1997. 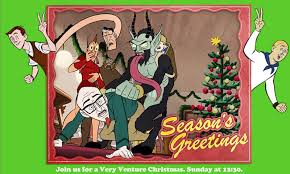 The Venture Bros.:  “A Very Venture Christmas” – This might be the first time I’ve mentioned The Venture Bros. on this blog, which should be considered a crime.  The Venture Bros. is the best show on television.  I can’t get enough of it and have probably seen every episode ten times, if not more.  The lone Christmas special for the brothers Venture is actually the show’s lone half episode as it clocks in at under 15 minutes.  Despite the brief running time, there’s a lot of great gags, most notably the appearance of the Christmas Krampus and the debut of Tiny Joseph.  At some point I’m going to have to start talking about The Venture Bros. more, but this is an okay start.

The Flintstones: “A Flintstone Christmas” – This one’s going back a few years.  The Flintstones had a few memorable Christmas specials, but this one is the only one I’ll go out of my way to view.  It’s sort of a re-make of the first Christmas special where Fred had to fill in for Santa.  In this one, Fred once again has to fill in for an out of commission Santa as he’s laid up at the Flintstone’s residence with a cold.  Unlike the first one though, this time Barney tags along as Fred’s elf and the running time is extended to a full hour.  While Fred and Barney fly around the world delivering presents, Mr. Slate and the wives await Fred’s arrival at a Christmas party where he’s supposed to play Santa.  Just when it looks like Fred’s about to get into a host of trouble, he comes through and the process gets repeated.  Fred ends up getting bailed out by Santa in the end, so they’re even when all is said and done.  It’s too bad Hannah Barbara hasn’t done a better job of getting its Christmas specials out on DVD.  A collection including this one and The Jetsons, Smurfs, and other holiday classics would probably sell pretty well. 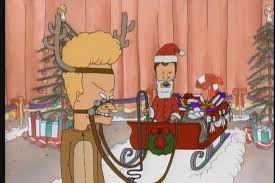 Beavis & Butt-Head Do Christmas – Everyone’s favorite dim-witted duo had a couple holiday specials including this one.  In it the pair take on two holiday classics, A Christmas Carol and It’s a Wonderful Life.  In the first, Beavis envisions himself as the manager at Burger World and finds himself as this tale’s Scrooge.  Only Beavis is unmoved by the visions he sees, he just wants to watch some porn and couldn’t care less that his employees are suffering.  In the second, Butt-Head is shown what life would be like if he were never born, and predictably, everyone is better off for it.  In fact, this story’s version of the Clarence character is here to kill both Beavis and Butt-Head in order to make the world a better place.  He doesn’t succeed, and we’re thankful for it.  During the festivities, we’re also shown segments featuring Santa Butt-Head with Beavis serving as a reindeer.  Butt-Head reads viewer mail and whips Beavis.  When the chicks writing the letters start to fawn over Beavis, he just whips him more and more.  Not only is this a humorous holiday themed episode, it’s also one of the best episodes of the original series.  Here’s hoping for a new Christmas special from these two arrives this month.

Bad Santa– Last but not least, my new favorite Christmas movie.  And by new, I mean 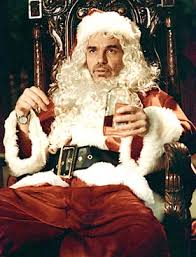 within the last five years, which makes Bad Santa far more recent than most of the specials I’ve cited across both entries.  Bad Santa is an atypical Christmas movie in that there’s very little Christmas cheer to be had.  Christmas is just a useful time of year for the film’s protagonists, Willie and Marcus, to case a department store while masquerading as Santa and his little elf buddy.  Billy Bob Thornton is outrageous in his turn as Willie, a character with almost no redeeming qualities.  In fact, so unredeeming was Thornton’s character that director Terry Zwigoff was forced to shoot some additional scenes just to make Willie look some-what decent.  It actually was a good move by the studio as some of these added scenes, like the one where Willie tries to teach The Kid how to box, are among the funniest.  This is a dark comedy, and one of the best I’ve seen, Christmas or no Christmas.  The supporting cast is great too and includes the final film role for the late John Ritter.  That said, this isn’t a film for everyone but it’s definitely one for me!

Thus concludes my list of Essential Christmas Viewing.  I definitely enjoy the funny side of the holiday but there’s some sentimentality in there as well.  I will watch all of these specials and more this December.  Hopefully you have a list of your own that you can enjoy, and if I was able to convince someone to check out a special they never saw before then all the better.

This entry was posted on Friday, December 2nd, 2011 at 9:12 pm and posted in Television. You can follow any responses to this entry through the RSS 2.0 feed.
« Essential Christmas Viewing (Part 1)
Super Mario 3D Land »