The Nintendo 3DS had a sluggish launch and one I think I’ve chronicled fairly well here.  Early on it was really a lack of quality software that kept sales slow (and a rather large sticker price) until the arrival of Ocarina of Time 3D.  Not long after that title arrived, Star Fox 64 3D hit stores and represented another quality title.  Throughout that, Nintendo was able to supplement the true 3DS titles with some quality Virtual Console titles.  The problem was, we had already played these games before.  Sure, both Zelda and Star Fox received a nice visual boost but that merely hid the fact that both titles were nearly 15 years old.

Finally, the first Triple A, original, game has arrived and who else could it be in the starring role?  It’s Mario, and he’s back in his first original handheld game since 2006’s New Super Mario Bros. and his first ever original portable title in the third dimension.  And by third dimension, I mean both the game engine and that feature that is supposed to be the main selling point of Nintendo’s latest handheld, the stereoscopic 3D.

Super Mario 3D Land is a title that is right up my alley.  It’s an all new Mario adventure, but it features several nods to the old-school games, primarily Super Mario Bros. 3.  If Nintendo is going to focus on one game to emulate, why not SMB 3 which is in the running for greatest game of all time.  The homages to that title are numerous, the most obvious one being the inclusion of the tanooki suit.  Whenever Mario finds the brown leaf power-up he is given a cute, cuddly, tanooki suit that grants him a tail attack and a hover ability.  The suit is absurd looking, even more so today than it was on the NES, but it’s just as useful as it used to be.  Well, it does lack a true flying ability and initially lacks the stone-form ability as well.  The tail attack is certainly nice to have for those of you used to playing Super Mario Galaxy where Mario has a similar spin attack by default.  The hover ability is also a great safety net for those tough platforming sections and is needed to get some of the games numerous star coins. 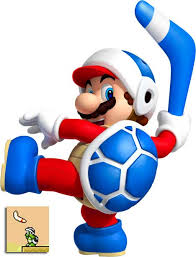 If Mario only had the one power-up though, that would be pretty disappointing.  New to the Mario-verse this time around is the boomerang suit.  Like SMB 3’s hammer bros. suit, the boomerang suit outfits Mario as a boomerang brother.  He’s able to throw one boomerang at a time, that will always come back to him which can be useful for setting up return strikes on enemies.  It also can be used to grab items like other power-ups and star coins.  Also returning is Mario’s trusted fire flower.  You would think the boomerang suit would render the fire flower obsolete but it does hold some advantages, namely that Mario can shoot up to two fireballs in succession and their range is much farther than the boomerang.  There are also some Zelda-like puzzles in the game where Mario can use his fire power to light some beacons.  Unfortunately, Nintendo didn’t take the opportunity to throw in another SMB 3 homage and have the fire flower give Mario an orange suit, instead it’s the traditional white and red.

As for the gameplay, this is pretty much a mix of old and new.  The game certainly has a Galaxy feel to it, minus the funky the gravity.  I would say it plays most like a cross between the New Super Mario Bros. games and the Galaxy ones.  Each level has three hidden star coins to find and a certain quota is needed to advance in the game and to unlock bonus levels.  There are 8 worlds with 5 to 6 levels within each one.  Each world ends with either a trek through Bowser’s castle or an air ship battle with a returning Boom Boom from SMB 3 or Pom Pom, which I assume is his sister.  For some reason, Nintendo chose to go this route for this game rather than to resurrect the Koopa kids from SMB 3.  The boss battles are fairly painless, with the exception of the final Bowser confrontation which caused me to continue numerous times.

Outside of that though, the game is pretty easy.  Most gamers will max out Mario’s extra lives before arriving at World 8 .  Most of my deaths were the result of poorly timed jumps on my part or intentional because I missed a star coin.  The difficulty would have been the number one source of criticism for me if not for the Special Worlds.  The Special Worlds open up once the game is finished and represent a second game.  Opening up the Special Worlds also unlocks the tanooki suit’s stone-form ability and even lets you play as Luigi.  Some of the Special Worlds, like the castles, are just harder versions of the normal level but many are new levels entirely.  Some also include a shadow Mario to pester you and force you to move quickly.  The game will keep track of your speed runs for Street Pass purposes, meaning when you walk past someone who also has this game the system will exchange your best times and give you something to try to beat. 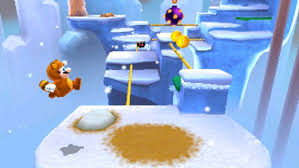 Practice your jumping because this game is loaded with sections like this.

The other criticism I have to levy at this game is the use of 3D.  Many media outlets are praising this game for its use of 3D, but I reckon most are just drinking the Nintendo kool-aid.  Yes, in this game 3D is practically required in some parts which makes this the first game to accomplish such a feat.  How ever, it still fails to elevate the 3D effect beyond a gimmick.  Most of the places where 3D is necessary are self-contained rooms and make for awkward optical illusions for target jumping.  Otherwise, I found it just made negotiating jumps even more difficult.  I did force myself to play with it on at all times, unless I found a section where it was really just pissing me off (like the final battle with Bowser) and shut it off out of frustration.  3D just isn’t a natural thing for the human eye and it just makes Mario feel hard to control.

And hard to control is what has always been in the background for the 3D Mario adventures.  Mario controls well-enough, but he’ll never control as tightly on a 3D plane as he does on a 2D one.  This game made me appreciate the approach the Galaxy franchise took as the use of gravity in those games cut down on death by falling.  Very few of my deaths are actually caused by enemies and mostly are caused by missing platforms.  Nintendo also took away Mario’s ability to double and triple jump for this game, but I found that to be a good thing as it allowed for section with lots of repeated jumping.  Mario can still do a long jump, but for some reason my ability to pull it off consistently seemed spotty.  I never got a great hang of it, but also never encountered a spot where I absolutely had to use it.  Mario can also do a quick side-flip, but I often found myself pulling that off by accident which would only lead to trouble.  He also has a power-up backflip that has its uses.

Annoyances aside, this is a great game.  Yes Mario could control better and 3D is still mostly a stupid gimmick, but he controls well-enough and you can always shut the 3D off if you please.  The main game is pretty easy to get through, but the Special Worlds will test the skills of most gamers.  And this isn’t a game where you should be settled with just beating it.  No, any gamer who picks this one up should aim to collect all of the star coins as that’s where the true challenge lies.  The game is just fun to play and takes me back to the days when I played games for the simple pleasure of it, not to advance a narrative.  Hopefully Super Mario 3D Land is just the beginning in a long line of quality original games to hit the 3DS.  It’s been a long wait.

This entry was posted on Sunday, December 4th, 2011 at 4:57 pm and posted in Video Games. You can follow any responses to this entry through the RSS 2.0 feed.
« Essential Christmas Viewing (Part 2)
Dragon Ball – Season One »