We’re past Thanksgiving and the calendar reads December 1st which can only mean one thing:  we are officially in the Christmas season.  Sure retailers try to start the season earlier and earlier each year in an attempt to stimulate consumerism but once December is here even the Scrooges of the world are forced to accept it.

For someone with no religious beliefs what-so-ever, I sure do love this time of year.  Like most people, I find it annoying when Santa and Frosty show up in stores before Halloween.  And by the time New Year’s rolls around I’m pretty sick of the Christmas music at the mall, grocery store, and in every commercial.  Something I seem to never lose an appetite for though are Christmas television specials.  Be they original stories or just Christmas themed episodes of my favorite shows, I tend to love them all.  Well, not all of them.  There are some pretty terrible Christmas specials that surface every season, often multiple times.  And as I have gotten older, I have lost interest in a lot of the Rankin/Bass productions like Frosty the Snowman and Santa Claus Is Coming to Town.  And as someone who isn’t particularly interested in the religious origins of the holiday, I don’t get much enjoyment out of The Little Drummer Boy or Small One.

Every year, right around Thanksgiving, I begin to get the itch.  The itch to dig out my old Christmas specials recorded onto VHS decades ago (now conveniently transferred to DVD) complete with vintage commercials that give me a laugh.  I also dig out the movies and DVD’s of the same material and seek out other specials on cable and make a note of when to tune in.  I’ll watch a lot of specials this holiday season, some that I don’t even particularly care for, but the ones I am about to post on are the ones I have to see every year, sometimes twice!

Mickey’s Christmas Carol – The Dickens classic, only with mice and ducks, Mickey’s 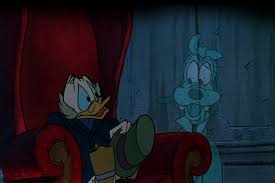 Goofy as Jacob Marley might be my favorite character in this special.

Christmas Carol first showed up in theaters in 1983 alongside the feature film The Rescuers and was once a staple of broadcast TV around this time of year.  There are many adaptations of A Christmas Carol and any television series that lasted more than a few seasons probably has one.  Many I find too derivative and pointless, but this one has always resonated with me.  This is, of course, where we were first introduced to the animated version of Scrooge McDuck, who would go on to star in Disney’s Ducktales.  This Scrooge is wonderfully done, and while he isn’t truly mean, he’s just so self-centered that he can’t be bothered with anything that isn’t making him money.  Mickey plays the role of Bob Cratchit with Goofy serving as Jacob Marley.  The animation is superb, as is often the case with Disney.  The hand-drawn animation even still looks wonderful on my nearly 25 year old VHS copy.  To truly experience this holiday classic though, you need the broadcast version that used to air in the 80’s and 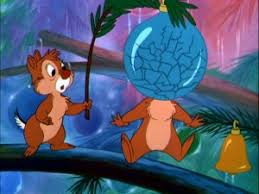 90’s.  This version was shown with three classic Disney short films:  Donald’s Snow Fight, Pluto’s Christmas Tree, and The Art of Skiing starring Goofy.  These shorts can be found on the Disney Trasures collections today, and I’ve seen Pluto’s Christmas Tree included on DVD’s containing Mickey’s Christmas Carol as well.  Pluto’s story, where he and Mickey cut down a tree that just happens to be home to Chip and Dale, is probably my favorite with Donald battling his nephews in an outrageous snow ball fight a close second.  This is classic Disney that kids today have no concept of and this is almost always the first Christmas special I watch each season.

Dr. Seuss’ How The Grinch Stole Christmas – This one goes without saying, it’s a classic!  If you’ve never seen it then surely you are not from earth, and I welcome you to our humble planet.  I love the Grinch, always have and always will.  And I hope anyone reading this knows that I am speaking of the original TV special from 1966 and not that horrid film that I would prefer to pretend does not exist.  This one has it all, colorful rhymes, unique visuals, and even pleasant songs.  I detest musicals for the most part, and with Disney films I tend to just tolerate them.  With the Grinch, I actually enjoy them which is something even Walt has never been able to get me to do, so bravo to you Dr. Seuss and the folks at MGM.  I’ll probably watch this one at least a half dozen times before New Year’s.

Rudolf the Red-Nosed Reindeer – I mentioned in the lead in that I don’t particularly enjoy the Rankin/Bass productions any longer, but each year I make an exception for Rudolf.  While at one point in time I may have called this one my favorite (or runner-up to the Grinch), I definitely don’t enjoy it as much today.  The songs stink and I hate The Island of Misfit Toys, but everything else is pretty swell.  Sure that claymation stuff doesn’t really hold up well but it’s at least charming.  I still get a little lump in my throat when Santa asks Rudolf to lead his sleigh.  Nostalgia kicks every now and again.  Stay far away from the sequels though, if you know what’s good for you. 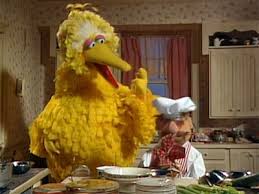 Big Bird, meet the Swedish Chef. He's got plans for you that involve a turkey baster and some stuffing.

A Muppet Family Christmas – Here’s a topical one, what with The Muppets being all the rage again with a new film in theaters.  This was a television special that first aired in 1987 and was seldom seen afterword.  It was notable at the time for combining all of the Muppet properties, namely The Muppets, Sesame Street, and Fraggle Rock, which is probably why the word “family” appears in the title.  The set up is that Fozzy’s mother is getting ready to head off to Malibu for a Christmas get-away and has rented out her farm house to Doc and Sprocket, who viewers at the time knew from Fraggle Rock.  Doc just wants a nice, quiet Christmas away from the city but the Muppets are about to mess everything up on him.  Fozzy, being the good-hearted son that he is, thought it would be nice to surprise his lonely mother by bringing the whole gang out to her house and they show up just before she’s about to head out the door.  Calamity ensues as the house is overriden with the odd-ball Muppet clan, and soon the gang from Sesame Street arrives! You may be wondering what they could possibly add but the writers do a good job of having the Sesame Street characters poke fun at themselves (there’s a delightful exchange between Doc, Bert, and Ernie where they explain what passes for small talk where they’re from) and I’ll always welcome an Oscar the Grouch appearance.  There’s a lot of good one-liners and subplots within the hour long special and even the first appearance of the Muppet Babies.  It closes out with a nice Jim Henson cameo as well.  My only gripe with the special is too much singing, especially towards the end.  I have the original 1987 broadcast which contains even more songs that weren’t released on the VHS/DVD copies to come later.  If you’ve never seen this one, dig it up as it’s pretty entertaining.

A Charlie Brown Christmas – Here’s another one you’re likely to find on every list of this type.  One of the oldest annuals, the classic tale of can’t win Chuck and his seasonal depression have charmed viewers for decades.  It’s hard to pin point what makes this one work so well.  Is it the way the children act like adults?  The catchy theme?  The focus on the commercialization of Christmas we all can identify with?  Or is it the way our protagonist is redeemed during the show’s closing moments?  Probably all of the above, and then some.  The Peanuts gang is in top form for this one, and out of all their holiday specials, this one has always been my favorite.  I still have yet to encounter a solid aluminum Christmas tree though.  I do find it somewhat ironic that this special has spawned it’s own line of commercial items.  People can buy replica Charlie Brown trees and action figures and all kinds of other crap.  It’s probably not what Charles Shultz envisioned when he penned this one so long ago. 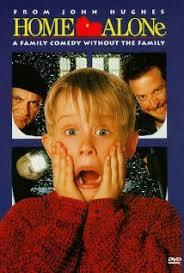 This is probably the first image that pops into the minds of 99% of Americans when they hear the name Macaulay Culkin.

Home Alone – The family comedy without the family, as the tag-line refers to it on the VHS release.  Home Alone was a box office juggernaut in 1990 and 19991 and made Macaulay Culkin a fixture at Christmas time.  This is one of those movies parents hated, since it contained lots of stupid scenarious, over-the-top cartoon violence, and screaming.  Kids loved it though, and for some reason it seems like many parents eventually came around to it as well (at least mine did).  Eight year old Kevin McCallister gets left behind when his entire family takes off on a vacation to Paris.  Most people endure the film’s early parts just to get to the memorable robbery scene where the film’s villains, played by Joe Pesci and Daniel Stern, get way more than they bargained for from Kevin as they try to loot his house.  The visuals make for a good laugh, but I really enjoy the film’s earlier scenes, notably anything featuring the made-up movie Angels With Filthy Souls.  As was the case with Rudolf, avoid the sequels.  Home Alone 2 is okay, but a carbon copy of the original, while everything after that is utter crap. 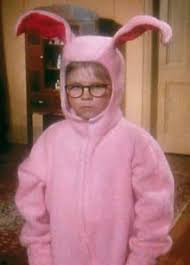 obsession with getting a Red Ryder BB Gun for Christmas is a tale we all can relate to.  At least, I hope everyone can.  I know I can.  In 1993 all I wanted was a Super Nintendo, and in true Ralphie fashion I thought I had been let down again, only to have my dad point out to me that there was something behind the dining room set I missed after ravaging the area underneath our Christmas tree.  Ralphie’s exploits through adolescence and his quirky family dynamics are what make this tale relatable and endearing nearly 30 years after it first came out.  We rise and fall with young Ralphie through each scene and share in his triumph when his Christmas wish comes true.  The fact that the film avoids any real melodrama is a true testament to its writers and crew.  TBS has made this one into a tradition for my family as after we exchange gifts we sit down with some tea and breakfast and watch it on Christmas morning.

That concludes part one of my Essential Christmas Viewing List.  As you probably noticed, this post covered mostly the classics, the ones everyone enjoys with perhaps only a slight twist or two.  My next entry will be more centered on me and the specials I often have to seek out each year that others perhaps do not, so come back and check it out.

This entry was posted on Thursday, December 1st, 2011 at 7:17 pm and posted in Television. You can follow any responses to this entry through the RSS 2.0 feed.
« Skyrim Impressions
Essential Christmas Viewing (Part 2) »