Over the course of five months I blogged about my favorite cartoon as a kid:  X-Men.  I gave an episode synopsis/review for every episode (well, I cheated a bit by looking at them by plot, so 4-parters weren’t split out by episode as I went through it all) which was a lot of fun for me.  For some, it necessitated a re-watching of the episode which would lead to me watching episodes I didn’t necessarily need to see again, but wanted to.  And with every episode available on DVD, it was really easy.

These DVD covers are pretty awesome.

I was a first day purchaser for each DVD as they were released by Buena Vista.  The DVD’s had some nice, original, box art but the actual content was bare bones.  That is to say, there really wasn’t anything other than the episodes themselves (in broadcast order).  It was disappointing, as even some of the VHS tapes from the ’90’s at least had some roundtable discussions with the creators of the characters and show, but in the end a minor flaw.  I was so happy to finally have the show I adored as a kid on DVD and at the ready whenever I wished to see it that any short-comings could be overlooked.  And much to my satisfaction, the program has aged well.  Sure it may not look and animate as well as modern cartoons but the content and characters are watchable even at an adult age.  That’s something not every cartoon from my youth can claim (I’m looking at you, Mario).

So as a way to put a nice bow on everything, I figured I would list my favorite episodes.  As with my individual reviews, I’ll go by plot so, for example, “Out of the Past” would be considered as one episode, even though it’s two parts.  I’ll draw a line at the four and five part story arches, of which there were 3.  And while those are entertaining, none of them would crack my list anyways as their wide scope is some-what of a hindrance.  Though I suppose if I liked an individual episode enough I would have included it, but I really didn’t.

I figured a top 10 would be too easy, so I settled on doing a top five which proved really difficult.  Ultimately, my criteria was equal parts enjoyment and importance to the series as a whole.  As a result, through no conscious effort on my part, all five episodes ended up coming from the first two seasons.  I’m slightly uncomfortable with that because it makes it seem like the final three seasons aren’t that good, but they are!  There were some tough final omissions and I would be remiss if I didn’t list these honorable mentions:

So what episodes made my Top 5?  Read on:

Remember when you could only get "X-Men" on VHS one episode at a time?

Till Death Do Us Part – A very important episode that sets up the events for all of season 2.  Morph is reintroduced and when it happened it had impact.  Even though he had only been “dead” for a season it felt like a shock to see him back and as a bad guy.  Mr. Sinister also made his true debut for the series and lived up to his name.  Most importantly though, the Friends of Humanity were introduced serving as a real world enemy for the X-Men and one they couldn’t simply face head-on.  The FOH bring the civil rights aspect of the show into the forefront, and when the writers are working with that mind-set, the show is at its best!

The Final Decision – Season one’s finale and the first time the X-Men team-up with arch enemy Magneto.  Such a partnership would become the norm in later seasons to the point where Magneto didn’t even feel like a villain, but here it had purpose and weight.  The episode’s melodrama where the X-Men are seen walking off into certain doom was chilling, and still is for me today.

A Rogue’s Tale – Perhaps unexpected if you didn’t read my original synopsis, but a great origin story for Rogue and another episode with emotional weight.  Sometimes it feels like the girls of the team get overlooked, but getting a glimpse of the tragic parts of Rogue’s past were revealing and extremely well done.  As a viewer, we empathize with the Ms. Marvel character but at the same time with Rogue as well, blurring the line between hero and villain.  The fact that the episode doesn’t really have a nice, happy ending, just adds to the experience. 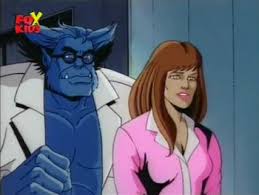 I wonder what he would look like if he shaved?

Beauty and the Beast – I considered making this number 1, but couldn’t for what will soon be obvious reasons when I get to number 1.  This episode though represents everything that is great about the X-Men.  Here we have Beast, a mutant who has some neat abilities and can do things normal men cannot, but it comes at the cost of his physical appearance.  Before this episode, we didn’t know Beast that well but from what we did know it seemed like he didn’t let his appearance get him down.  Here we see him vulnerable as his mutant heritage threatens the safety of the woman he loves.  We see the ugliness of humanity both through the FOH and Carly’s father, who can’t even acknowledge Beast as a person even though he gifted his daughter with sight.  The drama is handled exceptionally well for a kid’s show, and the ending always affects me.  If I had to pick just one episode to show someone new to the X-Men what the show is all about, I’d probably go with this one.

Night of the Sentinels – How could it be any other?  This is the episode that started it all and hooked me and millions of others right from the start.  It effortlessly introduces us to the X-Men through Jubilee and the hostile world they inhabit.  The Sentinels prove to be a truly threatening and deceitful menace that earn their distinction by killing the lovable Morph in the second act.  We get classic interactions between Wolverine and Gambit, Wolverine and Cyclops, and Cyclops and Xavier.  We see not only the conflicts that exist in the world, but the ones that exist amongst team members.  The animosity between Wolverine and Cyclops especially is quite riveting and Wolverine drilling Cyke in the gut put everyone on notice, and sent kids flying to toy stores looking for Wolverine action figures.  I can’t think of a better first episode(s) for any series than this one.  It accomplishes everything it needs to and then some.  Today, I still love watching it.  I laugh when Jubilee blasts Wolverine, I ache when Jean relays the news on Morph, and triumph when Wolverine sinks his claws into the neck of a Sentinel.  I love this show!

So that’s my top 5.  Feel free to agree or disagree, I won’t argue as there are many worthy episodes.  I didn’t even list one of the enjoyable Wolverine-centered episodes or any of the clever time traveling ones.  This is such a fun show, if I ever have kids I hope they take to it else I’ll be really bummed.

Though I’ve exhausted the topic of X-Men, there are more shows to revisit.  Perhaps I’ll never do as exhaustive a look at any other show, but I plan to do some DVD reviews at least and I already know what my next subject will cover.  I also intend to get to looking at older video games and talking about my all-time favorites.  I have the CDX to continue fiddling with, and some SNK hardware to talk about.  In short, I’m not lacking for nostalgia.

And lastly, if you haven’t heard Powerglove’s cover of the X-Men theme, where have you been the last year?!

This entry was posted on Tuesday, October 11th, 2011 at 9:02 pm and posted in Comics, Television. You can follow any responses to this entry through the RSS 2.0 feed.
« Danzig – “Legacy”
The Definitive Batman Film »