I’ve  been waiting awhile to post on this subject, mostly to see how things get finalized, but as we’re now one week away from the inaugural show it seems I can’t wait any longer.  For those unaware, Danzig – “Legacy” refers to four shows to be played over the next month that will cover the entire Glenn Danzig catalogue, including his time with The Misfits and Samhain.

For someone who seems reluctant to discuss the past in interviews, Glenn Danzig has not been shy about including some fan service into his live shows.  For many years it was not uncommon to hear the occasional Misfits or Samhain song at a Danzig show, often an old track being used as a reward of sorts for good audiences.  Then in 1999 came the Samhain reunion tour which was a part of that year’s Satan’s Child tour.  For those shows, Glenn was joined on stage by former Samhain drummers Steve Zing and London May, with the two switching off between bass and drum duties.  Pete “Damien” Marshall was not available so then current Danzig guitarist Todd Youth subbed for him.  Then in 2005, Danzig was joined by former Misfits guitarist Doyle on stage for a set of old Misfits classics.  The mini set would take place in the middle of the Danzig set and then carry over into the encore. 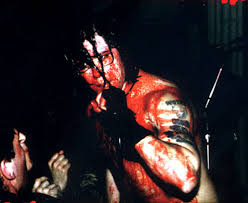 I expect blood for the Samhain set.

Danzig – “Legacy” is shaping up to be a combination of the two.  I don’t know who’s idea it was to do this, but it was first announced as part of the RiotFest which will take place in Chicago on October 7th.  Not long after additional shows were announced for New York (29th), LA (31st), and Austin (November 4th).  The participants are expected to be the same as before, with Steve Zing (now the current Danzig bassist) and London May representing Samhain and Doyle from The Misfits.  Some of the flyers state three sets will be played, one for each band, but the format of the show is still up in the air.  Also up in the air is who will be playing guitar for Samhain, though Glenn recently stated it will probably be current Danzig guitarist Tommy Victor.  I suppose there’s still an outside chance that Damien could show up for a show or two, specifically the NY one as I think he still resides in the area, but former Samhain/Danzig bassist Eerie Von has ruled himself out.

It would have been nice to get a true reunion with some old Danzig and Samhain members joining the party (I won’t even allow myself to consider the possibility of a Misfits reunion with Jerry Only) but you’re not going to hear me complain.  I missed out on the Samhain reunion in ’99 so I’m beyond excited at the chance to catch it again.  This announcement really snuck up on people and the general consensus among the fans seems to be shock and delight.

There’s a lot of possibilities for set lists considering the music spans over 30 years but there are some songs I would love to hear.  I’m betting the sets won’t be far off from what’s been done in the past, but that won’t shut off my imagination.  If I had it my way, the show would go something like this:

A man can dream.

The first show of this brief four show tour occurred last night in Chicago and the set list looks mighty fine.  I hope it doesn’t change at all when it comes time for the New York show.  The band lineup was as expected, with London May and Doyle being the only additions to the regular Danzig lineup of Tommy Victor, Johnny Kelly, and Steve Zing.

This entry was posted on Sunday, October 2nd, 2011 at 12:09 pm and posted in Danzig, Music. You can follow any responses to this entry through the RSS 2.0 feed.
« Opeth – Heritage
X-Men Animated Series Wrap-Up »

One response to “Danzig – “Legacy””